An investigation by Indonesian activists has shown that palm oil grown on destroyed tiger and elephant habitats is present in the supply chains of industry giants such as Wilmar, Musim Mas, and Golden Agri-Resources.

The world’s biggest palm oil companies have made public commitments to stop deforestation, but their supply chains remain tainted with palm oil grown illegally on protected land, a new report by Indonesian green group Eyes on the Forest (EoF) has found.

The investigative report launched on Wednesday, titled “No one is safe”, showed that the Tesso Nilo National Park in Riau and other protected areas which are home to endangered Sumatran tigers, elephants, and orangutans, are systematically being destroyed to grow palm oil.

The oil palm fruit grown in these fragile ecosystems end up in the supply chains of companies like Singapore-based Wilmar, Musim Mas, and Golden Agri Resources, as well as Indonesian firm Asian Agri, all of which have no deforestation policies.

EoF, which is a coalition of environmental groups including World Wide Fund for Nature Indonesia, Friends of the Earth’s Riau Office (Walhi) and Riau Forest Rescue Network (Jikalahari), carried out its investigation by following trucks carrying fresh fruit bunches (FFB) and palm oil from plantations to crude palm oil (CPO) extraction mills, and then on to processing refineries.

WWF Indonesia’s deforestation monitoring and advocacy manager, Nursamsu – who like many Indonesians goes by one name – said that “we are disappointed that despite their corporate commitments to stop deforestation, none of these groups has barred legally questionable oil from their supply chain”. 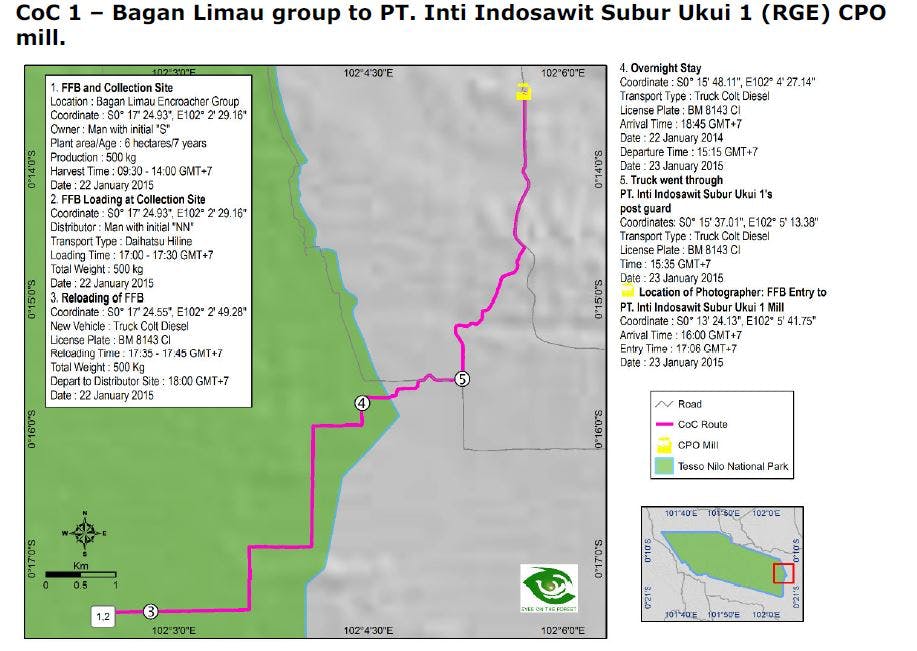 The investigation revealed that fresh fruit brunches from Tesso Nilo National Park and a nearby area the government has designated as a protected ecosystem are being accepted by mills run by subsidiaries of Wilmar and Asian Agri.

The CPO mills which buy the illegal bunches are also suppliers to Golden Agri-Resources and Musim Mas.

Nursamsu added that the main reason illegal bunches can slip into the supply chain is that for many companies, their palm oil is not traceable to the plantation where the fruit was grown. Typically, companies only know which CPO mill they were crushed at.

“We fully agree on the complexity of tracing FFB to sources, but warn this is the loophole that has allowed FFB supplies coming from some of the most damaging plantations into the country’s natural resources,” he noted.

The number of independent mills which do not have their own plantations - and so accept palm fruit from a greater variety of sources - is also growing, which makes the link between company, mill, and plantation even more uncertain.

We fully agree on the complexity of tracing FFB to sources, but warn this is the loophole that has allowed FFB supplies coming from some of the most damaging plantations into the country’s natural resources.

Between January and April last year, EoF monitored the illegal palm oil plantations in the Tesso Nilo National Park, as well as an adjacent former logging concession which has now been set aside for ecosystem restoration.

It found that more than 80 per cent of the 83,000 hectares national park has been converted to illegal oil palm plantations, leaving only 18 per cent, or 15,000 hectares of natural forest standing.

Tesso Nilo National Park and the former logging concession are under the Indonesian government’s “Forest Estate”, and oil palm development on this land is considered illegal. Anyone involved in buying or selling oil palm fruit from these plantations could face criminal charges in Indonesia. However, enforcement of these laws has been weak, said EoF in its report.

By mapping satellite images of hotspots over these illegal plantations, EoF also found that illegal palm oil development in Tesso Nilo and other protected areas appeared to have been the key causes of fires between 2008 and 2015. These fires cause an annual haze which blankets much of South East Asia in a toxic smog.

Last year’s haze pollution was the worst on record. It caused half a million respiratory illnesses in Indonesia, the country’s economy lost billions of dollars and the burning emitted about 1.75 billion metric tonnes of greenhouse gas emisisons, more than all of Germany or Japan’s carbon emissions from burning fossil fiels in 2013.

Fire was also the likely method used to clear land inside the protected areas, which exacerbated the haze and suffering, said EoF. To monitor who was buying the crops grown on this illegally clearled land, the group followed delivery trucks from plantation to mill, and then to processing plants, between 2014 and 2015.

It discovered that the fruit was sold to a total of 19 CPO mills, including several independent operators and two which belong to PT Indi Indosawit Sabur, an Asian Agri subsidiary. Indosawit has been a member of the Roundtable on Sustainable Palm Oil (RSPO) - the industry association which certifies responsibly-produced palm oil - since 2006.

When EoF followed the trucks from CPO mills to refineries, it uncovered that tainted CPO was transported to a refinery owned by Royal Golden Eagle group’s PT Sari Dumai Sejati, as well as Wilmar International’s integrated manufacturing complex in Pelintung district in Riau province.

This facility houses PT Wilmar Nabati Indonesia and PT Wilmar Bioenergi Indonesia, both of which have supply chain certificates from RSPO, which verify that a given batch of RSPO-certified palm oil is not mixed with illegal or unsustainable oil during processing and delivery.

In the report, EoF said that when it shared its findings with Wilmar, the company acknowledged that it has not traced its FFB from external suppliers to its plantation and added that it has raised EoF’s findings in its grievance procedure.

Asian Agri, meanwhile, promised to investigate the illegal supply chains, and said it requires third-party companies which supply fresh fruit bunches to provide the exact geographical coordinates of where the fruit was grown. It also said it informed all suppliers that their mills would only accept legal supplies.

The investigators also found that Golden Agri-Resources - which in February announced that it can trace all the palm oil in its Indonesian supply chain back to the mill, and is planning to further trace it back to the plantation - could also be buying tainted palm oil.

Golden Agri noted that while it has already achieved full traceability to the mill level, it is prioritising the mills EoF flagged in efforts to trace FFB to plantation level. It also entered the companies into its grievance procedure, a mechanism to investigate problems.

EoF also said that while it did not track any trucks with tainted FFB or CPO to facilities owned by the Musim Mas Group, the company’s extensive list of 445 crude palm oil suppliers includes 14 of the 19 mills which purchased FFBs grown in Tesso Nilo and other illegal areas.

In a statement on its website, Musim Mas said thatit “recognises that the points raised in the report are serious and represent a potential breach of its sustainability policy for its third-party suppliers”. The EoF report noted that it has sent questionnaires to all its external CPO suppliers to indicate the source of their raw materials.

The company added that it “takes the grievance raised in the report seriously and will engage the mentioned 14 mills within the coming weeks”.

Cleaning up the industry

These findings point to a systemic use of illegal palm oil by the world’s largest companies, meaning that the majority of the world’s palm oil supply could be linked to illegal practices, said EoF.

Woro Supartinah, Jikalahari coordinator, noted that increasing global demand for palm oil and Indonesia’s poor governance and enforcement its forest protection laws are the key reasons for illegal cultivation and forest fires in the country.

“This encroachment has to stop,” he said.

To end these practices, EoF urged all companies to collectively reject illegal fresh fruit bunches and CPO, so that growers no longer have a market for their products.

It also said the companies featured in the report should do more to support smallholders and independent suppliers who are trying to adopt sustainable practices, so they can differentiate themselves from rogue companies.

The government should also stop issuing operating licenses to CPO mills until they can prove their fresh fruit supply base is legal, and do more to enforce existing forest protection regulations.

Riko Kurniawan, executive director, Walhi Riau, said that “it is time that all stakeholders work together to tackle the systemic illegality and unsustainability in Indonesia’s palm oil sector”.

This will “ensure that the industry really changes its course to a green, sustainable economy,” he added.