2018 was the fourth hottest year on record

The average global temperature in 2018 was 1.42 degrees Fahrenheit or 0.79 degrees Celsius above the 20th-century average, scientists found.

According to independent analyses of the latest global temperature data by the US National Oceanic and Atmospheric Administration (NOAA) and National Aeronautics and Space Administration (NASA), 2018 was the fourth hottest year on record for planet Earth.

“2018 is yet again an extremely warm year on top of a long-term global warming trend,” GISS director Gavin Schmidt said in a statement. Schmidt added that the global warming observed so far has been driven largely by the increased greenhouse gas emissions pumped into the atmosphere as a result of human activities. 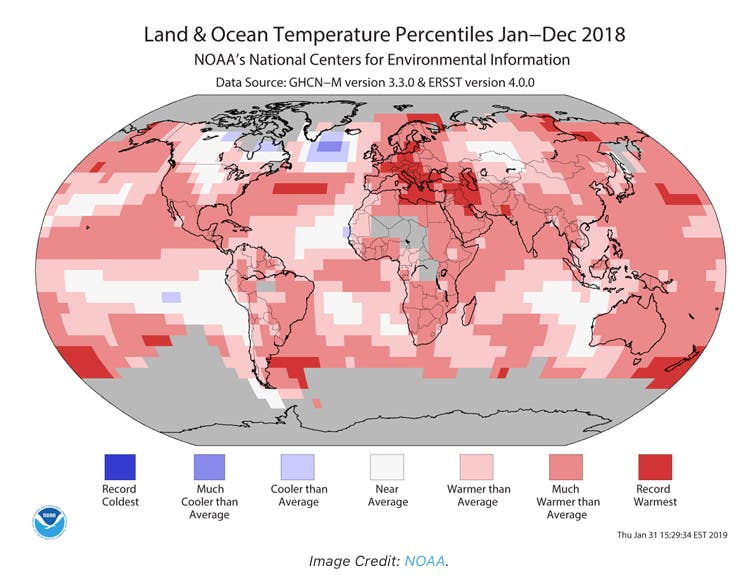 Every year since 1977 has seen above-average global temperatures, making 2018 the 42nd consecutive year that was warmer than it would have been if not for man-made climate change. Nine of the 10 hottest years ever recorded have now occurred since 2005, and the past five years have been the five hottest. 2018’s average global temperatures rank behind just 2016, the warmest year on record, 2015, the second warmest, and 2017, the third warmest.

Because weather dynamics can impact regional temperatures, different regions of Earth can experience different amounts of warming in any given year. NOAA found that the annual mean temperature in 2018 for the 48 contiguous states of the US was the 14th warmest on record, while much of Europe, New Zealand, and parts of the Middle East and Russia experienced record high land temperatures. Parts of the southern Pacific Ocean and parts of the north and south Atlantic Ocean also recorded all-time-high sea-surface temperatures.

The strongest warming trends have been observed in the Arctic region and its continued loss of sea ice, however. The average Arctic sea ice extent for December 2018 was 4.58 million square miles, an analysis by the U.S. National Snow and Ice Data Center showed, based on data from NOAA and NASA. That’s 378,000 square miles or 7.6 percent smaller than the average for 1981 to 2010 and the fourth smallest December extent since records began in 1979.

At the same time, declines in the ice sheets of Greenland and the Antarctic are contributing to sea level rise, GISS Director Schmidt added, while increasing temperatures are leading to longer fire seasons and more severe extreme weather events. “The impacts of long-term global warming are already being felt — in coastal flooding, heat waves, intense precipitation and ecosystem change,” Schmidt said.

The US experienced 14 “billion dollar weather and climate disasters” last year, for instance, which claimed the lives of 247 people and caused $91 billion in damages. “Both the number of events and their cumulative cost ranked fourth highest since records began in 1980,” NOAA said. 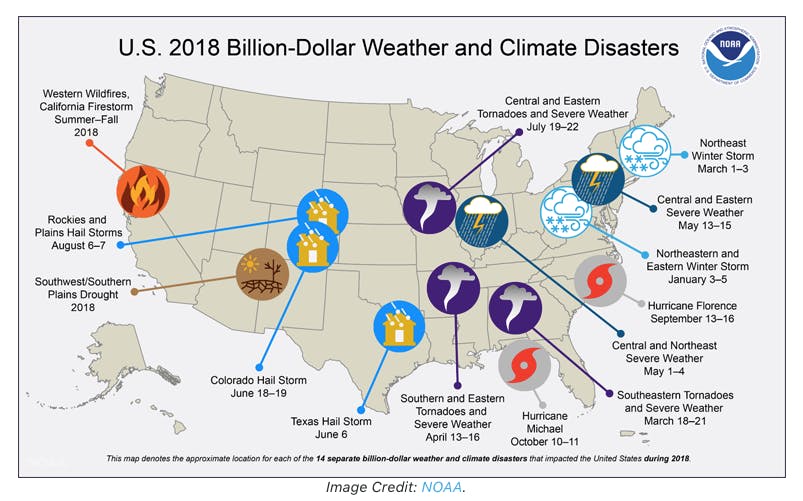