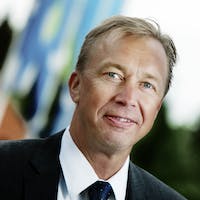 He is responsible for the strategic direction of the Norwegian 6,143 MNOK (€650m) sensor-based solutions business which operates globally and employs around 2,600 people. TOMRA is listed on the Oslo stock exchange, Oslo Børs (STO:TOM).

The company has two distinct elements to its operations, Collection Solutions and Sorting Solutions. The former develops reverse vending systems providing an automated method for collecting, sorting, and handling of used beverage containers for recycling or reuse. The latter manufactures automated sorting systems for the food, recycling, mining and other industries.

This powerful combination of technologies makes TOMRA one of the most advanced providers of sensor-based solutions in the world, with approximately 87,000 of its systems installed globally.

Stefan became president and chief executive officer in August 2009. Since then, he has led the business on a transformational journey from a loose collection of entities into one strong and unified brand.

Stefan leads TOMRA with the belief that it is possible to create economic value in a way that also creates value for society. The company’s vision and mission of ‘leading the resource revolution’, which he set for TOMRA, strongly reflect this.

Stefan spoke about what leading the resource revolution means to both him and TOMRA at a TEDxOslo (click here to see video).

Stefan holds a Master of Science degree in industrial and management engineering from the University of Technology, Linköping, Sweden and Darmstadt Technology University, Germany.

He is a dual citizen of Sweden and Switzerland, and speaks fluent Swedish, German and English. Stefan also has a basic understanding of Chinese (Mandarin).

Born in Gothenburg, Sweden, in 1960, he is married with two children.

Cashing in on the benefits of the circular economy

Cashing in on the benefits of the circular economy