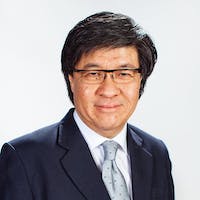 Having joined Fuji Xerox in 1986 as the First Systems Engineer and subsequently the Systems Support Manager, he has since led Fuji Xerox in achieving the ISO 9002 and ISO 14001 International Standards and the Singapore Quality Class.

With his leadership, the CSR function has executed highly impactful environment conservation initiatives which lead to major reductions in energy (electricity & gasoline) consumption and paper usage.

Atkin’s recent approach to Total Social Responsibility paved the way to key partnerships with the community and national agency from an integrated environment and social perspective.

Guided by the Total Social Responsibility roadmap, he led Fuji Xerox Singapore to foster the first ever partnership with the Institute of Technical Education (ITE) to train and develop a young and green work force for job placements within Fuji Xerox Global Services. The first batch of 30 students graduated in October 2010 and the second training programme was scheduled for September 2011.

Through a strategic alignment of company initiatives through the Voices of Customers, he developed and deployed a Service Quality Management model which played a vital role in reinstating and sustaining Fuji Xerox’s number one position in overall Customer Satisfaction and Loyalty for five consecutive years.