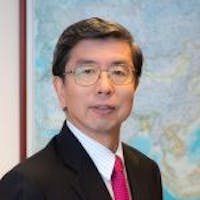 Takehiko Nakao is the President of the Asian Development Bank (ADB) and the Chairperson of ADB’s Board of Directors. He was elected President by ADB’s Board of Governors and assumed office in April 2013.

Before joining ADB, Mr. Nakao was the Vice Minister of Finance for International Affairs at the Ministry of Finance of Japan.

In a career spanning more than three decades, Mr. Nakao has gained extensive experience in international finance and development. He has held senior positions in the Ministry of Finance in Japan, which he joined in 1978, including Director-General of the International Bureau, where he fostered close ties with leading figures in the Asia-Pacific region, and G20 nations.

He was assigned as Minister at the Embassy of Japan in Washington D.C., between 2005 and 2007, and from 1994 to 1997 served as economist and advisor at the International Monetary Fund.

He has published books and numerous papers on financial and economic issues, and in 2010 and 2011 was a Visiting Professor at the University of Tokyo.