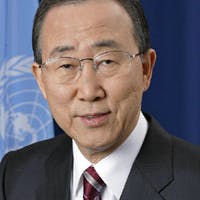 Ban Ki-moon is the eighth Secretary-General of the United Nations. His priorities have been to mobilize world leaders around a set of new global challenges, from climate change and economic upheaval to pandemics and increasing pressures involving food, energy and water. He has sought to be a bridge-builder, to give voice to the world’s poorest and most vulnerable people, and to strengthen the Organization itself.

"I grew up in war", the Secretary-General has said, "and saw the United Nations help my country to recover and rebuild. That experience was a big part of what led me to pursue a career in public service. As Secretary-General, I am determined to see this Organization deliver tangible, meaningful results that advance peace, development and human rights."

Mr. Ban took office on 1 January 2007. On 21 June 2011, he was unanimously re-elected by the General Assembly and will continue to serve until 31 December 2016. Highlights of his tenure include: