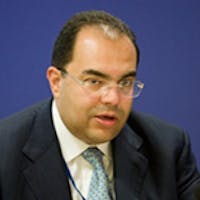 Mahmoud Mohieldin is the World Bank's Corporate Secretary and President's Special Envoy on Millennium Development Goals, the Post-2015 process, and financial development. He is also in charge of coordinating the World Bank Group’s efforts to strengthen partnerships with the UN and multilateral development institutions.

Prior to joining the World Bank, Mr. Mohieldin held numerous leading positions in the government of Egypt and served on several boards of directors in the Central Bank of Egypt and the corporate sector. He was a member of the Commission on Growth and Development and selected a Young Global Leader of the World Economic Forum in 2005.

His professional experience extends into the academic arena as a professor of economics at Cairo University, also serving as member of the board of several universities in Egypt and holding leading positions in national and regional research centers and think tanks. He has authored numerous publications and articles in leading journals in the fields of finance and development in English and Arabic. He received his Ph.D. in economics from the University of Warwick, M.Sc in Economic and Social Policy Analysis from the University of York, and B.Sc from Cairo University.

Tackling inequality is a political choice

Tackling inequality is a political choice

How to achieve the SDGs

How to achieve the SDGs

A sustainable economy for the Arab world

A sustainable economy for the Arab world

Why business will make or break the SDGs

Why business will make or break the SDGs

What role does nature play in economic growth?

What role does nature play in economic growth?