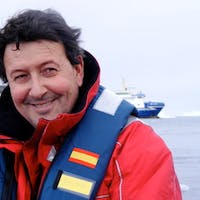 Professor Carlos M. Duarte is Director of the Oceans Institute at The University of Western Australia and Research Professor with the Spanish National Research Council (CSIC) at the Mediterranean Institute for Advanced Studies (IMEDEA) in Mallorca, Spain.

His research focuses on understanding the effects of global change in aquatic ecosystems, both marine and freshwater. He has conducted research worldwide, including multiple expeditions to the Arctic and the Southern Ocean and co-leads the EU-funded project on Arctic Tipping Points. He served as President of the American Society of Limnology and Oceanography (ASLO) between 2007 and 2010. In 2009, he was appointed member of the Scientific Council of the European Research Council (ERC), the highest-level scientific committee at the European Level.

He has published more than 400 scientific papers and two books, and has received many honours including the G. Evelyn Hutchinson Award from ASLO in 2001, the National Science Award of Spain (2007) and the King James I Award for Research (2009).

In 2011, he received the Prix d’Excellence from the International Council for the Exploration of the Seas (ICES) and has received honorary doctorates from the Université de Québec a Montrèal (Canada) in 2010 and Utrecht University (The Netherlands) in 2012.