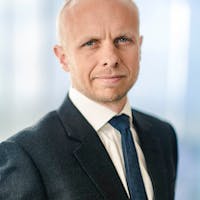 Dan is a Partner at Foresight Group and is primarily responsible for the deployment of Foresight’s energy infrastructure strategy in new and existing markets, focussed on renewable energy generation technologies such as wind, solar and bioenergy, utility scale battery storage, and advanced transmission and distribution infrastructure. Dan has nineteen years of experience of finance and investment in renewable energy and sustainability-driven themes and has worked in the sector at different times in Europe, North America and Asia. He has written in numerous publications including the Financial Times.

Prior to Foresight Dan worked at Sindicatum, a dedicated clean energy investing firm. After working on a capital raise of c.$300 million primarily from US institutional investors he focussed on the fund deployment in South East Asia, China and India. Between 2000 and 2007 Dan worked for EY. Dan is a chartered accountant; he holds an MSc in Sustainable Leadership from CSEM (Distinction) and a BA in Modern History from the University of Bristol.