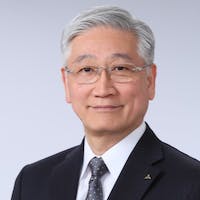 In his current position as of April 2017, he has been based in Singapore, and is responsible for overseeing MHI’s Asia-Pacific and Indian businesses, where the company has 44 offices and factories across 8 countries employing 5,300 people. He is focused on providing cross-industry solutions to improve people’s lives in Asia. As urbanization increases, MHI is working to address issues such as access to energy, traffic congestion, waste management, and the need for efficient urban transportation. MHI’s factory solutions will help support foundational industries in countries around the region with improved productivity, quality and operations. Also, as airports are upgraded, MHI will provide solutions for international gateways, equipment to deliver utilities more effectively, and the improvement of integrated airport management.

He joined MHI in 1979 and has been primarily involved in the sales and service business of power plant equipment such as gas turbines. From 2000 to 2016, he dedicated himself to the expansion of the service business in the power plant industry and successfully ingrained services deeply into the organization as a foundational and key focal point of business. He was appointed Deputy Head of MHI’s Takasago Machinery Works in 2008, and then served as Senior Vice President and Head of Power Systems Service Headquarters at Mitsubishi Hitachi Power Systems (MHPS) when it was established in 2014. In July 2016, he was appointed Director, Executive Vice President and Head of Business at MHPS.

Kawai has a Bachelor’s degree in Economics from Waseda University.