Facing public protests and concern from neighbouring Singapore, the government halted the Chinese-backed massive land reclamation project which was initially allowed to begin construction without a detailed environmental impact assessment.

On January 1, 2014, fishermen near Kampong Pok, a village on Malaysia’s southern shore, were alarmed to find a fleet of barges and dredgers dumping sand on their fishing ground. Up until that moment, they’d heard nothing about land reclamation planned for their neighbourhood.

Over the next few months, they would begin to learn about the scope of the development scheme planned for this shallow expanse of shellfish beds and seagrass.

Country Garden Pacificview, a unit of one of China’s largest real-estate developers, had quietly partnered with the Johor state government and Ibrahim Ismail, the Sultan of Johor, to build a “21st century city” on a 19-square-kilometer (7.3-square-mile) man-made island in the Strait of Johor. Village leaders alerted media in Johor Bahru, the state capital. They also contacted reporters in Singapore, located just across the narrow strait. Singapore, which is extremely sensitive to any effort to crowd the waterway dividing the two nations with a new development, and especially without any prior notification, issued a formal request for information.

New information quickly emerged. According to local media reports, Country Garden had paid the sultan and the government $55 million and gained the right to purchase and construct the man-made island that would be big enough for a city of tall towers and 700,000 residents. 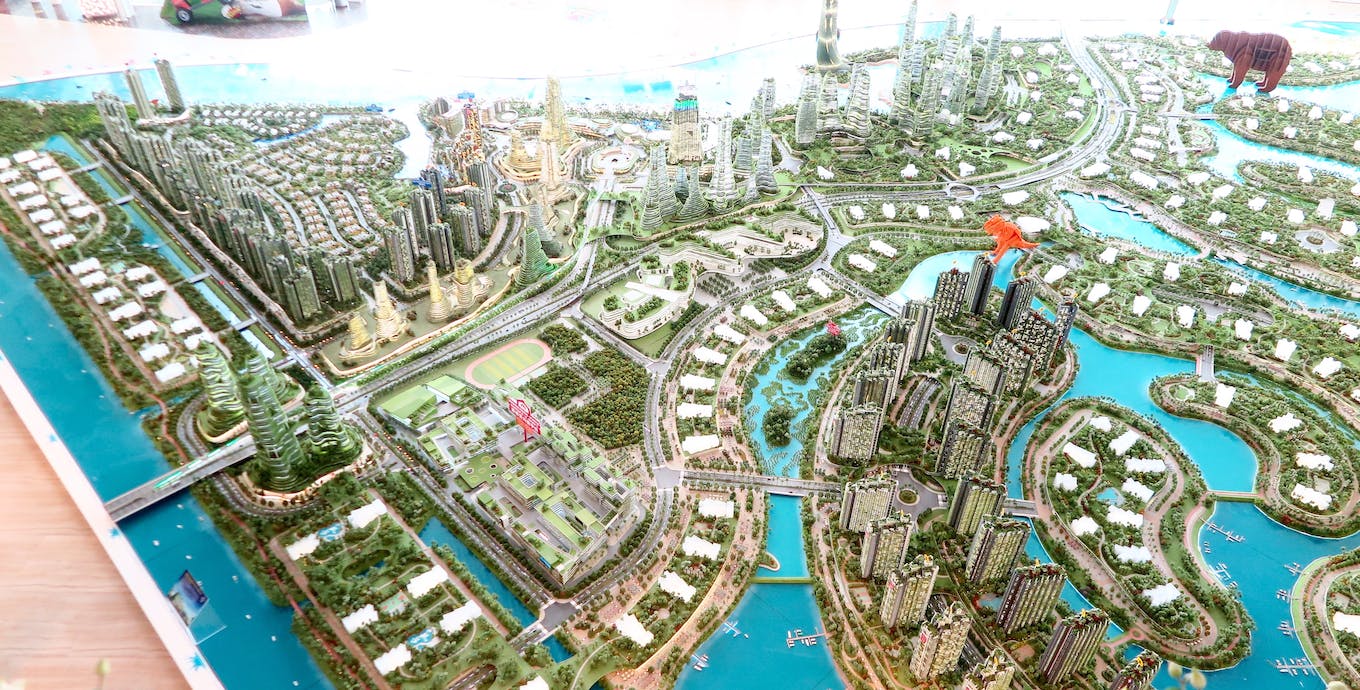 The scale model diorama of Forest City displays an ambitious urban development strategy that Country Gardens views as a model of sustainability, and that critics assert is a threat to Malaysian stability and the marine environment. Image: Keith Schneider for Mongabay.

Country Garden disputes the $55 million figure, which was cited by the Malaysian Insider, but “cannot divulge a specific breakdown, as it is bound by business confidentiality obligations,” said company spokesperson Eileen Ho, in an email.

The state and the Sultan of Johor hold a 34 per cent stake in the project, with the latter controlling the bulk of that stake. Country Garden had been allowed to proceed without a detailed environmental impact assessment or any of the required reclamation permits.

Johor permitted the project even though the new island would smother sensitive seagrass beds and endanger the Pulai River Mangrove Forest Reserve, one of Malaysia’s largest mangrove ecosystems. In 2003, 91 square kilometres (35 square miles) of the Pulai River mangroves that lie close to the reclamation were classified as a Ramsar site, an international designation to protect wetlands considered globally significant.

So began the development of Forest City, perhaps the largest mixed-used real-estate project in the world.

Country Garden and the state of Johor market the project as a new design for energy-efficient, ecologically sensitive, land-conserving, low-polluting offshore cities of the future. Whatever their grand ambition, Country Garden has been busy for four years trying to clean up the regulatory, political and publicity mess produced by Forest City’s rough start.

In June 2014, six months after the fishermen discovered the reclamation, the Malaysian Department of Environment issued a stop-work order pending completion of an approved EIA. A month later, Country Garden announced it was downsizing the project by a third, dividing it into four islands, and taking a host of other steps to demonstrate its project would be a showcase of ecological sensitivity.

The sheer timescale of the development—estimated at 30 years—poses the greatest long-term risks. Intuitively, marine ecosystems can sustain stresses for limited periods of time and recover, but nowhere near the time needed to construct new islands housing several hundred thousand people.

Buildings would be constructed with state-of-the-art, waste-reducing practices, they said. Along with promises to restore mangrove forests and seagrass beds, the company said it would establish new habitats for prawns and fish. In response to concerns about sea-level rise, Country Garden said it was putting all of the built environment on top of huge concrete platforms high above the waters of the strait. It hired respected Malaysian scientists to regularly monitor water quality and restoration projects, and make their findings public.

Country Garden also spent $25 million to compensate some 250 fishermen for losses in their catches, and has actively been involved in financially supporting schools and an environmental education program in Kampong Pok.

Has Country Garden’s work to repair its missteps been sufficient? Researchers who have studied the project closely have mixed assessments.

Serina Abdul Rahman wears a number of hats as an area resident; a highly regarded conservation scientist at the ISEAS–Yusof Ishak Institute, a Singapore-based think tank; and co-founder of Kelab Alami, an environmental education group supported by Country Garden. “Forest City does try to offset the damage that they’ve done to the environment by supporting the local community around them,” Abdul Rahman said in an email. “Those are the people most affected by the development. This level of engagement has not occurred in the community before.”

Joseph Marcel R. Williams, a graduate student in planning at the Massachusetts Institute of Technology, studied Forest City and prepared a paper two years ago that reached this conclusion: “The sheer timescale of the development—estimated at 30 years—poses the greatest long-term risks. Intuitively, marine ecosystems can sustain stresses for limited periods of time and recover, but nowhere near the time needed to construct new islands housing several hundred thousand people.”

“It’s probably safe to say that Forest City has contributed to the loss of important habitat and presents some serious financial risks to the region if it is abandoned or unfinished,” Williams added in an email to Mongabay. “[Megaprojects] often over-promise economic benefits while operating outside of traditional planning and democratic processes. In this case, it appears the Sultan of Johor has strong involvement and has helped shepherd the project past environmental review and regulation that might have easily stalled other such initiatives. ”

Developers are different. They build dioramas: finely detailed, three-dimensional scale models of how a project will look when it’s finished. The bigger the diorama, the more certain developers are that they will succeed.

One of the most expansive dioramas in Asia occupies some 930 square meters (10,000 square feet) of floor space in the sales centre at Forest City, displaying scale-model buildings taller than a man.

The diorama is big because Forest City is big, and not just in the area, numbers of residences and projected population. Its Chinese developer is set on proving Forest City as a dense, walkable, clean, environmentally sensitive urban design for the 21stcentury.

It’s an urban development vision reminiscent of the Futurama diorama built by General Motors for the 1939 World’s Fair. The giant GM scale model, seen by an estimated 10 million people, was the first public display of ribbons of elevated highways and clusters of tall downtown office towers surrounded by retail centres and office parks in leafy residential suburbs. Futurama, in effect, was the template for suburban sprawl: the auto-oriented, energy-gulping, expensive civilization that GM and its industrial allies envisioned as the dominant metropolitan design for the last half of the 20thcentury.

Forest City, say its developer and master planner, could have a similarly outsized influence this century. With 16,000 residential apartments built and sold since construction started on the first island three years ago, Forest City is already the largest private mixed-use real-estate project ever undertaken in Malaysia.

If market conditions and demand persist as they do now, when the new city is finished in the mid-2030s it will encompass three more man-made islands and be a $100 billion oceanfront urban centre with 200,000 more residences, perhaps 200,000 jobs, thousands of offices, hundreds of retailers, dozens of manufacturers, hotels, schools, parks and healthcare facilities.

Some 700,000 people will live there, about the same number of residents as Seattle. Country Garden projects that residents and workers will get around on foot, bicycle or a network of electric trams. The developer is seeking Greenmark certification for Forest City, a rigorous measure of sustainability, efficiency and pollution abatement awarded by Singapore’s Building and Construction Authority. Most striking is that Forest City’s four islands will total 13.9 square kilometres (5.4 square miles). Seattle’s city boundary encompasses 218 square kilometres (84 square miles). And the company asserts, in a critical difference for mainland development, that it did not need to move any homeowners out of the way.