Our current socio-economic system is built on the exploitation of both people and planet, causing inequality and environmental devastation. To save a world on the brink of ecological and social disaster, calls for greener, more efficient capitalism won’t cut it, writes Zafirah Zein.

Several weeks ago, I attended the Shape the World Summit 2019, where leaders from business, education, civil society and delegates from around the world gathered at the National Design Centre in Singapore to discuss ways of designing economies to become more equitable and inclusive, while keeping within planetary boundaries.

It was one event not unlike others I have attended as an environmental journalist that facilitated discussion on how to make cities in the 21st century more liveable—in other words, efficient, resilient and sustainable—without compromising modern day comforts.

Why I was particularly drawn to this event however was its focus on global inequality and its call to alter the socio-economic rules that govern today’s societies. I was interested to find out how a room full of professionals would re-imagine a more equitable economy in a world faced with impending climate catastrophe.

Major climate movements like Extinction Rebellion and top-down approaches like the Green New Deal have recognised environmental and social justice as a cornerstone of effective climate action, but very rarely did sustainability events in Singapore confront related issues of inequality, even though inequality undergirds every global issue, from urban population growth, to the renewable energy transition to food security.

Many communities in Asia are also disproportionately impacted by the climate crisis, even though they are the least responsible for it, and research has found that unequal societies emit more carbon.

According to data released by Global Footprint Network on Earth Overshoot Day, developing countries like Indonesia and Vietnam have the least impact per person on resources, while the United Arab Emirates, Qatar, Luxembourg and Canada far exceed the planet’s ability to recover the natural resources consumed in those countries.

However, during a panel titled Imagine a More Equitable Economy, while panelists highlighted that widening inequality and climate breakdown were the product of today’s economic system, talk of solutions revolved around terms like “sustainable capitalism” and “eco capitalism.” Someone even suggested that the current system was yet to be perfected, all while acknowledging that capitalism is the cause of many global problems today.

I had sat there nonplussed. Sustainable capitalism? Bearing in mind that a growth-oriented, greed-driven system has got us into this mess in the first place, the term seemed like an oxymoron.

Moved by the language of Greta Thunberg and other activists, I thought the discussion fell short of the radical lengths needed to get to where we need to be to protect the planet, strike climate change at its core, and improve standards of living for the deprived.

The roots of capitalism lie in historical injustice

Considering that the foundations of capitalism can be traced to the extractive industries that arose during the onset of colonialism, I am hard pressed to believe that re-branding capitalism will help people and planet recover what they had lost during this era of exploitative growth.

In an opinion piece for The Guardian, founder of youth climate action organisation Zero Hour Jamie Margolin highlights the link between capitalism and its colonial beginnings: “Colonialism’s mindset of heedless extraction, greed and human exploitation not only planted the seeds of today’s climate crisis, it remains visible in the crisis’s central injustice: although the poor are responsible for only a tiny share of humanity’s greenhouse gas emissions, they generally suffer first and worst.”

And this is exactly where my beef with our current system lies: inequality is endemic to capitalism and its neoliberal variety has been “built on an archipelago of sweatshops and oppression across the developing world,” according to British journalist Johann Hari.

Colonialism and economic imperialism was furthermore paved through violence and the disruption of social and indigenous ties, losses that are inherited through generations and compounded by Western development models that define progress and prosperity in terms of boundless growth.

The issue with capitalism is that it builds upon historically-inherited inequalities of class, ethnicity, and gender. It also tends to exacerbate inequality when underprivileged groups are denied access to the economic opportunities afforded by capitalism.

Neoliberalism was built on an archipelago of sweatshops and oppression across the developing world.

To carry on with the systemic inequality we inherited from the past, people in poorer countries are exploited to this day for the comfort and wealth of rich nations, as can be seen by our heavy reliance on modern technology and the reluctance of developed countries to be held accountable for their carbon footprint.

For instance, research by the Global Carbon Project (GCP) shows that rich countries in Europe and the United States outsource a significant amount of their climate pollution to developing countries in Asia, where labour and manufacturing costs are cheaper.

According to Glen Peters, a scientist at the GCP, this masks the true environmental footprint of these countries, a case that deserves more attention in international climate negotiations.

Another example is the e-waste trade and the human cost hidden in today’s flashy tech gadgets. The rare minerals and natural resources that make up our smartphones for example, are unethically sourced from places such as the Democratic Republic of Congo and Indonesia, where workers and children are trapped in a web of human rights abuses.

Furthermore, for all the talk of green growth, while a renewable energy revolution is urgently needed, growth, if unfettered and unregulated, will lead only lead to continued exploitation.

This is exemplified by the nascent deep-sea mining industry. According to a Greenpeace report, industry claims that mining precious resources in the Earth’s deep sea bed is essential to a low carbon-economy, although this has not been supported by players in the clean energy sector and has been condemned by scientists.

Those in defence of capitalism and the status quo often forget that the reality of most poor nations under the current world order is defined by injustice, and that more commercial incursions into the natural world will not get us out of the ecological hell hole we have dug for ourselves.

Greenwashing and commodification is a distraction from systemic problems

According to Naomi Klein, a journalist who investigated the concept of disaster capitalism in her book the Shock Doctrine, the “idea that only capitalism can save the world from the crisis it created” is no longer an abstract theory but one that is being actively pursued and supported.

Left, right and centre, environmental and social movements worldwide have been co-opted and commodified to feed a growth-driven economy—another oxymoronic term called “woke capitalism.” People are being swayed to go green by buying green, while shirts emblazoned with slogans touting gender justice are stitched up in slave-like conditions in Asia. 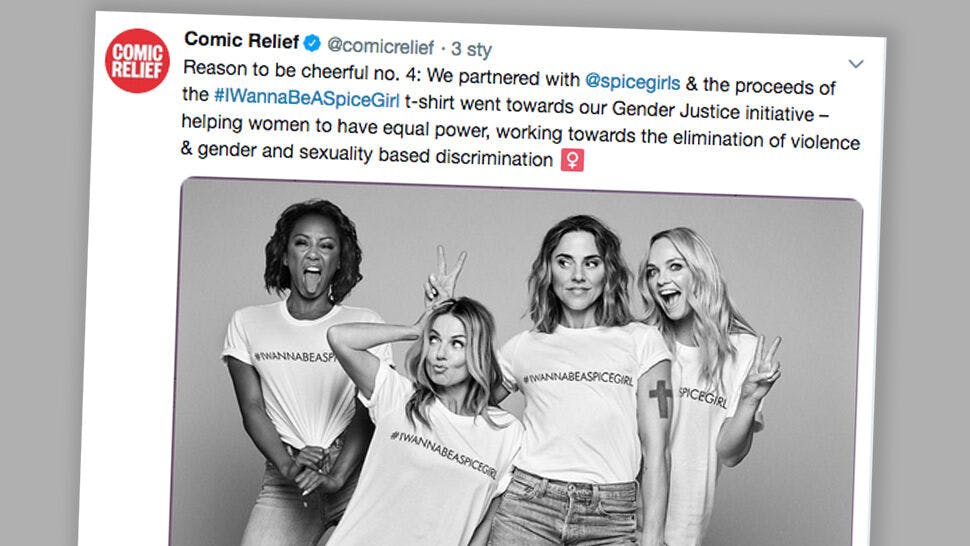 Spice Girls t-shirts that were sold to raise money for a gender justice campaign by major British charity Comic Relief were made in a factory in Bangladesh that paid women 42 cents an hour. Image: Twitter

Furthermore, as Vijay Kolinjivadi brilliantly puts in an op-ed for Al Jazeera, techno-focused environmentalism and sustainable lifestyle changes such as energy-saving appliances, vegan diets, or the construction of green buildings in high income countries do less to solve major environmental problems.

Although the intentions behind such choices are admirable, these solutions are “quick fixes” that prop up economic and political structures that rely on capital expansion and distract us from the inequality and exploitation that the current system depends on.

“Growth-based economies are at the heart of environmental disasters we face today; making our goods, economic activity or infrastructure ‘greener’ and more efficient without a major overhaul of the global economic system is not a long-term solution,” wrote Kolinjivadi.

According to him, environmental problems were “framed as an issue of inefficiency that could be solved by technology and the better management of resources”—a narrative I have encountered at many sustainability events here in Singapore.

Discussions also rarely addressed the elephant in the room: wealthier countries and communities need to reduce consumption and challenge the growth mindset perpetuated by big business and those in power. In a world strained by humanity’s incessant demands for greater material wealth and comfort, there is no other option but to cut back on what we associate as prosperity.

Right now, the world I live in is on track to blowing through the 2 degree Celsius limit set by the Paris Agreement within the next thirty years.

Already, with 390 parts per million by volume (ppmv) of CO2 in the atmosphere, we have transgressed planetary boundaries, and major biological systems are on the verge of tipping over. This year, Earth Overshoot Day arrived earlier than last.

On July 29, slightly over mid-way through 2019, we exhausted the planet’s natural resources for the year.

Meanwhile, cities around the world are marred by chronic inequality, as technological advances within a global capitalist economy continue to widen the gap between rich and poor.

What we don’t need is a last-ditch battle cry for the capitalist status quo, but its upheaval. How much we extract from poorer nations for the sake of a privileged minority should also be included be in any conversation about inequality, development and sustainability.

Ultimately, the logic of growth must be questioned and re-examined within a broader scope that includes equity and ecological preservation.

In his book Signs on the Earth, the environmentalist Fazlun M Khalid proposed that notions of prosperity, progress and development be redefined and replaced by equity, while climate change be dealt with the urgency that it deserves.

“We should now be looking at ways in which people can lead decent lives without causing the earth any more harm,” he wrote. “It’s about planetary justice. It is about making sure people don’t go hungry as the environmental cake shrinks.”

Around the world, models that seek new ethics of production and consumption include cooperative ventures and bioregional and solidarity economies, which promote local business, not-for-profit endeavours and the re-orientation of work from market-determined wage labour to sustainable livelihoods that ensure decent standards of living.

Stricter regulation, policy innovation and global governance of the commons also point to possible pathways that the world could follow to achieve greater fairness and well-being for both people and the planet.

They are championed by countries and communities that may not have the highest levels of gross domestic product (GDP), or meet Western notions of progress. They are however, not fixated on growth and reflect a more holistic understanding of sustainability that experts in richer nations hesitate to consider.

The world is reaching the 2020 climate deadline, which will define whether the generations after us will inherit the social and environmental ills we have sown. If I were to imagine a more sustainable, equitable future, capitalism would have no place in it.