Why Asian hospitals need to shrink their carbon footprint

Asia's hospitals are a huge source of waste and fossil fuel emissions. Health Care Without Harm Asia’s Pats Oliva argues why hospitals in the region need to work towards low-carbon healthcare.

Despite its mandate to protect and save lives, the healthcare sector is a major source of carbon emissions. Hospitals use vast resources, energy-intensive equipment, operate around the clock, and generate and dispose of medical plastic waste by incineration.

Hospitals contribute to climate change, and climate change is threatening to undo the last 50 years of gains in public health. According to the 2018 Lancet Countdown Report, there were 18 million more heatwaves exposure events affecting vulnerable people in 2017 than in 2016, and an additional 1 billion more each year are expected to be affected by 2040.

In the past 40 years, typhoons, particularly in Asia, have intensified by more than 50 per cent, according to Nature Geoscience. For instance, Typhoon Nina, recorded as the 4th deadliest tropical cyclone that hit the Pacific in July 30, 1975, has caused at least 229,000 fatalities in China. In November 2013, Super Typhoon Haiyan caused an arresting wreckage to communities, cities, schools and even hospitals in the Philippines.

During the 2008 World Health Assembly, 193 countries gave unanimous support in ensuring that health is fully integrated in the global climate narrative. The term ‘green hospital’ was then conceived.

Then came Super Typhoon Nepartak which ploughed into Taiwan last July 2016 leaving 270,000 homes without electricity, and a number of people drowned, stranded and injured. The following month, Typhoon Lionrock flooded Japan causing evacuation advisories for at least 400,000 residents. In August 2017, Nepal, Bangladesh and India endured massive flooding due to monsoon rains resulting in forced evacuations, establishments closing down and deaths of family members.

Meanwhile, 87 per cent of cities worldwide are in breach of WHO air pollution guidelines, meaning billions are subjected to unsafe levels of atmospheric particulate matter (PM 2.5), which can lead to lung cancer, pulmonary disease and heart failure. Moreover, increases of 3 per cent and 5.9 per cent from two types of dengue virus were recorded since 1990.

First, do no harm

According to the Global Green and Healthy Hospitals (GGHH) Network, in 2007, 86 per cent of healthcare’s global primary energy consumption came from fossil fuels. So, during the 2008 World Health Assembly, 193 countries gave unanimous support in ensuring that health is fully integrated in the global climate narrative. The term ‘green hospital’ was then conceived.

Health Care Without Harm (HCWH) defines green hospital as “the one that promotes public health by continuously reducing its environmental impact and ultimately eliminating its contribution to the burden of disease. A green and healthy hospital recognises the connection between human health and the environment, and demonstrates that understanding through its governance, strategy and operations. It connects local needs with environmental action and practices primary prevention by actively engaging in efforts to foster community environmental health, health equity and a green economy.”

The concept and benefits of developing green and healthy hospitals is based on the Hippocratic Oath taken by doctors to “first, do no harm”. It has expanded not only through the transition to renewable energy, but in employing energy efficiency measures such as turning off lights when not in use, practicing rainwater catchment in health facilities, and implementing sustainable healthcare waste management and refusing single-use plastics.

Because of its adherence to these principles, the Khoo Teck Puat Hospital in Singapore won numerous awards that recognise their efforts in developing a truly green hospital for patients and staff. In 2016, they received the President’s Award for the Environment and the Stephen R. Kellert Biophilic Design Award which recognised their efforts of including the building and the environment in their patients’ recovery process. 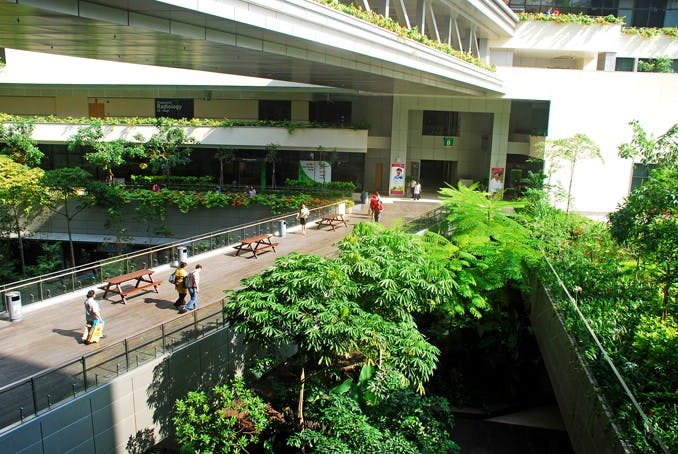 St. Paul Hospital Cavite, a small healthcare facility run by Paulinian nuns in the Philippines, has installed a biodigester for all the food waste from the patient rooms inside the facility. They use the energy produced for cooking in the hospital kitchen. While they do not have a green procurement policy, they have installed water dispensers in the hospital to avoid the over-use of plastic water bottles, and are implementing a strict ban on polystyrene for any type of food packaging.

In Taiwan, the Taoyuan Chang Gung Memorial Hospital implemented commendable sustainability strategies such as a ban on single-use table ware, an e-sheets system that minimises the use of paper, low-energy electronic devices, an inverter air conditioning system, joint washing by tunnel washer for laundry and numerous training sessions on energy saving that raise awareness of the energy measures being implemented.

In China, the Beijing Huilongguan Hospital applied energy saving technologies such as a ground-source heat pump system (GSHPS), a tap water pipeline network to avoid water leaks, and switched their boilers from coal-burning to gas-burning to reduce pollution. Even their shuttle bus routes where refined to decrease carbon emissions.

And in Malaysia, the Penang Buddhist Tzu Chi Dialysis Center employed water treatment system that recovers 90 per cent of wastewater.

These hospitals are members of the Global Green and Healthy Hospitals (GGHH) Network in Asia and last 2017, during the 4th Green Hospitals Asia Conference in Taipei, members and other health organisations gathered to work on fostering low-carbon healthcare to reduce the sector’s carbon emissions and ensure greener healthcare.

This year, the network will again gather in Singapore for the 5th Green Hospitals Asia Conference to draft strategies and unite health frameworks that will bring about sustainable, climate-resilient healthcare in the region.