Will the Belt and Road Initiative bring environmental devastation or a new era of Chinese global resource stewardship?

Trading camels for high-speed trains and caravansaries for power plants, the Silk Road is in the midst of a renaissance. On May 14 and 15, Beijing hosted a summit to discuss the resurgence of the ancient routes. Given the historical symbolism you might think it was an arcane assembly of academics. Instead, the meeting was China’s central geopolitical event of the year and a watershed moment in the country’s ascent to global leadership.

The Belt and Road Initiative (BRI) will play a determining role in shaping the sustainability of global development, particularly among emerging economies.

What is BRI and why is it important?

Alongside China’s explosive domestic growth, the country has long been making headlines for its investments and development in countries from Latin America to Africa. The Belt and Road Initiative, launched by President Xi in 2013, plans to further this overseas development push, funnelling approximately US$ 4 trillion to over 60 countries.

According to the Belt and Road Action Plan released in the spring of 2015, the initiative will encompass land routes (the “Belt”) and maritime routes (the “Road”) with the goal of improving interconnectivity in the region primarily through infrastructure investments.

Projects along these routes are already underway. President Xi announced in August 2016 that over 30 countries have signed formal agreements with China of which 20 were already planning projects from railways to coal-fired power plants, totalling over 900 deals.

The initiative is critical not just because of the scale of China’s investment but because of its political implications. At a time when the US is turning inwards, through this initiative China is poised to launch “globalisation 2.0”, a self-proclaimed “inclusive” mode of development. As such, the BRI will see China continuing to reshape traditional development paradigms and establish new institutions that could profoundly shift the dynamics of global governance.

What’s at stake for the environment?

China’s unprecedented development ambitions along the new Silk Roads come with both environmental concerns and opportunities in tow. The 2015 Action Plan states that “efforts should be made to promote green and low-carbon infrastructure construction and operation management, taking into full account the impact of climate change on the construction.”

Furthermore, a 2016 Chinese Academy of Social Sciences report highlighted BRI as an opportunity for China to help developing countries improve their environmental institutional capacity, and called on the country to carry out environmental impact assessments at the policy, strategy, and planning phases.

On the ground, Chinese development overseas could pose concerns for the environment. From the outset, BRI was in part designed to absorb China’s overcapacity in steel and cement production to boost the domestic economy. This perpetuates a carbon- and pollution-intensive economic model rather than helping the country wean itself from its dependence on heavy industry.

This is connected to the broader issue of building unnecessary or underutilised infrastructure. The Asian Development Bank estimates that Asia needs investment of USD 770 billion a year for new infrastructure until 2020 but China must be careful to avoid throwing resources at white elephants.

A major focus of the BRI is developing infrastructure for fossil fuel resources, such as a new oil pipeline cutting through Myanmar and coal-fired power plants in Pakistan and across Southeast Asia. These investments could lock-in fossil fuel dependency in the region even as China trumpets green energy domestically and on the global stage.

Chinese projects have also been known to spawn pollution problems in the past, such as water pollution from Chinese mining in Ghana. Apprehensions about damage to ecosystems among local communities have compromised Chinese overseas development plans in the past, as was the case with the suspended Myitsone Chinese dam project on Myanmar’s Irrawaddy River. 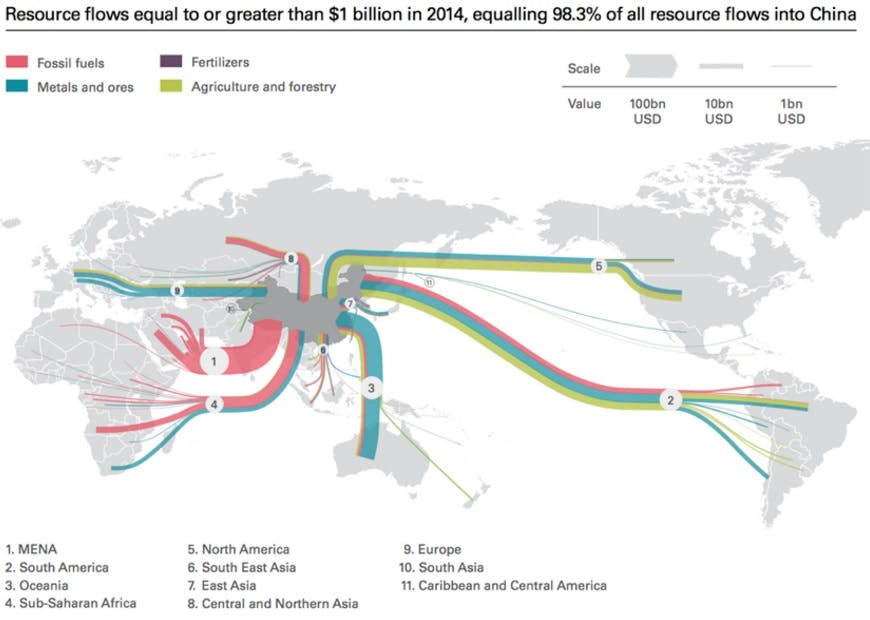 However, China has also been paving a path towards global environmental leadership in recent years. During the Hangzhou G20 summit in August 2016, China championed green finance and has since demonstrated its commitment as the largest issuer of green bonds in 2016.

New Chinese-led institutions such as the Asian Infrastructure Investment Bank (AIIB), which has committed US$100 billion to investment along the Silk Road, has promoted itself as “lean, clean and green” and in its Environment and Social Framework commits to helping countries pursue their national commitments under the Paris Agreement.

The AIIB also pledged to only fund coal-fired power plants under exceptional circumstances in its 2017 Draft Energy Plan and has yet to approve any coal projects.

China has been pursuing green investments opportunities from solar and hydropower projects in Pakistan to vast rail networks. However, the country has not released any overarching guidelines for the sustainability requirements of Belt and Road projects beyond individual institutions.

A group of Chinese and foreign non-governmental organisations have committed to helping China develop such guidelines under the umbrella of the China Green Leadership: Belt and Road Green Development project.

Whether the new Silk Road brings environmental devastation or a new era of Chinese global resource stewardship and sustainable development will depend heavily on how China approaches the Belt and Road Initiative. The May summit will take us another step forward and hopefully show which route China wants to take.

In this article we have referred to the Belt and Road Initiative (BRI). It is worth noting that other names for the project include One Belt One Road (OBOR), the new Silk Road, the Silk Road Economic Belt and the 21st-century Maritime Silk Road.

Lili Pike is executive director of the Beijing Energy Network.