US$900 billion a year: China is bearing the world's highest cost of air pollution from fossil fuels

US$900 billion a year. That’s how much air pollution caused by fossil fuels is costing China each year, through greater likelihood of respiratory and non-communicable diseases, years of life lost through premature deaths, and when people miss work.

The cost is nearly one-third the global total of US$2.9 trillion and makes up 6.6 per cent of the value of goods and services produced in China, projected a new study released on Wednesday by environmental advocacy group Greenpeace and the Centre for Research on Energy and Clean Air.

The United States and India round up the top three countries bearing the highest cost of air pollution caused by fossil fuels. The cost to the US is an estimated US$600 billion per year, while that for India is US$150 billion per year.

The report, titled Toxic Air: The Price of Fossil Fuels, assessed existing country data on pollutants like fine particulate matter (PM2.5), ozone (O3) and nitrogen (NO2). The health impacts were determined by combining pollutant concentration maps with the country’s population for the year 2018. 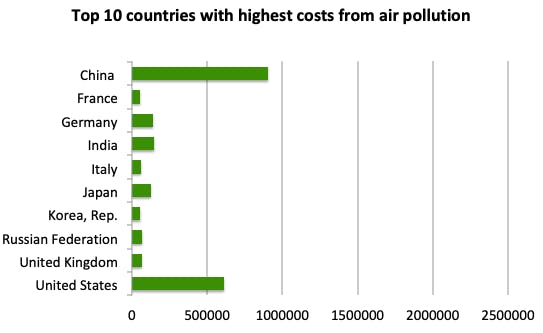 Greenpeace data shows that China has the highest economic cost of air pollution, at an estimated US$900 billion, followed by  the US at US$600 billion and India at US$150 billion a year. Image: Eco-Business

China is the world’s largest consumer of coal, a highly pollutive fossil fuel, and emitter of greenhouse gases. Last year, however, coal’s share of China’s total energy consumption fell below 60 per cent for the first time as cleaner energy sources made gains.

On why the air pollution cost for India is so much lower than China’s, Lauri Myllyvirta, lead analyst of Greenpeace East Asia’s Global Air Pollution unit, told Eco-Business: “In India, the overall pollution levels are even higher than China but India’s share of fossil fuels is lower because small-scale biomass burning is also an important source in India.”

Greenpeace figures show that exposure to PM2.5 is the leading cost of health and economic impacts arising from air pllution, resulting to the biggest expenditure among the two other pollutants. Image: Eco-Business

He added that compared with other polluted countries in emerging Asia, China’s population is older, making it more prone to the chronic diseases that cause most air pollution deaths.

Of China’s US$900 billion air pollution tab, US$660 billion is from fatalities from PM2.5 pollutants that come from power plants, motor vehicles and airplanes.

Lung disease related to PM2.5 exposure is also a leading cause of early death in China, with 582,000 fatalities per year—approximately 40 per cent of the global incidence, stated the report, which is the first global estimate of the
economic burden caused by air pollution from fossil fuels.

Exposure to PM2.5 and ozone from fossil fuels is responsible for an estimated 7.7 million asthma- related trips to the emergency room globally each year. PM2.5 pollution, which can trigger asthma or cause respiratory inflammation, results in an estimated 1.8 billion missed work days annually worldwide, the report projected. In China, work absences amounted to 748 million days in 2018, costing the economy about US$39 billion.

Myllyvirta said: “The heavy cost of fossil fuel pollution is an important factor in China’s clean energy drive, which will reduce coal use and continue to push down the costs of clean energy technologies. China’s trends will greatly influence emerging Asian countries with rising energy needs.”

Solutions to toxic air pollution are increasingly affordable and available, the report noted. Governments can, for instance, set the course for clean transportation by setting phase-out dates for diesel, gas and petrol cars, introduce comprehensive and affordable public transport and build safe walking and cycling infrastructure.

“The transition to renewable energy is essential both to prevent catastrophic climate change and to protect our health,” the authors said.