Indigenous people significantly contribute to achieving a sustainable planet and mitigating against climate impacts. It is important for their rights to be protected, even if this means speaking up against those in power.

The Philippine government’s move to label United Nations special rapporteur on the Rights on Indigenous Peoples Victoria Tauli-Corpuz as terrorist is no more than retaliatory, she said on Tuesday.

In an interview with Eco-Business, Tauli-Corpuz, who is among more than 600 social justice, environmental and human rights advocates targeted by Philippines President Rodrigo Duterte’s administration, said that the move was a reaction to her defence of Lumads caught in the massive military operations launched by Duterte in May last year.

Tauli-Corpuz and others were targeted in a petition filed by the Philippines Department of Justice last month, a copy of which was obtained by Eco-Business. The government’s petition sought to declare the Communist Party of the Philippines (CPP) and its armed wing, the New People’s Army (NPA), terrorist organisations and at least 600 individuals as terrorists, including Tauli-Corpuz.

It was after she spoke up about the displacement of Lumads, an indigenous peoples group in Mindanao, from their territories due to the war that she received the pronouncement from the Philippine government, said Tauli-Corpuz. The statement said that she and UN Special Rapporteur on Internally Displaced People Cecilia Jimenez-Damary, were just out to embarrass Duterte.

“Clearly, that is an indication of retaliation,” Tauli-Corpuz said.

Declaring the groups and individuals as terrorists would enable the government to monitor them more closely, track finances and restrict their access to resources, among other things.

We cannot allow our country to deteriorate to a level where, in the end, all of us are so scared to speak up.

While Tauli-Corpuz admitted to fearing for her safety, especially at a time when “all kinds of extra-judicial killings are happening,” in the Philippines, she called on the Filipino people to not allow the country to slip into a “very authoritarian” and “almost fascist” mode of governance.

“This is really something that has to be confronted. We have to speak out,” Tauli-Corpuz challenged citizens.

“We cannot allow our country to deteriorate to a level where, in the end, all of us are so scared to speak up, nobody is going to dare criticise anybody in the government and we just allow them to have control over our democratic institutions,” she said.

Tauli-Corpuz said that this move by Duterte’s justice department will not stop her from fulfilling her mandate as a UN special rapporteur, a role she took on in 2014. 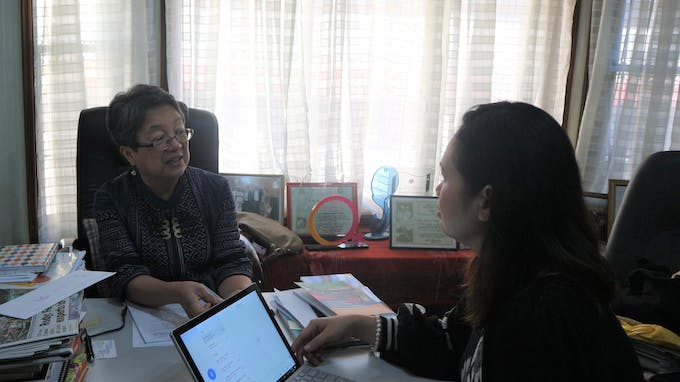 Despite fearing her safety, UN special rapporteur Vicky Tauli-Corpuz said she will continue to fulfill her mandate to IPs. Image: Eco-Business

“It’s not as if my mandate is just for the Philippines, it’s for the whole world”, she said.

Tauli-Corpuz reports on the human rights situation of indigenous people in specific countries and addresses cases of alleged violations. As an indigenous leader, she was actively engaged in drafting and adoption of the UN Declaration on the Rights of Indigenous Peoples in 2007.

While indigenous people only live in 5 per cent of the territories in the world, 80 per cent of the planet’s biodiversity hotspots are found on indigenous land; and they therefore make significant contribution to addressing climate change, Tauli-Corpuz said.

She pointed out that developments under the guise of climate-friendly renewable energy like hydropower and wind, if not approached from the human rights perspective, are not sustainable in the long term.

“I have seen those kinds of projects in Mexico where they have set up windmills without even consulting indigenous communities,” she said.

Unfortunately, the rights of indigenous people are not recognised as they should be, Tauli-Corpuz said.

She pointed out that indigenous people have the knowledge on how to sustain the forests but many of their traditional practices are criminalised. For instance, rotational agriculture in some countries is considered illegal. Pastoralists in Africa are displaced from their territories.

Another threat to indigenous people’s sustainable way of life and the protection of the environment that comes with it is a development model of extraction, overconsumption and over-production. These models, Tauli-Corpuz said, are not compatible with the indigenous peoples’ way of life.

She pointed out that many of the huge infrastructure projects that governments would like to bring in to indigenous people territory are infrastructures like mega dams under the name of mitigating against climate change.

This is why Tauli-Corpuz remains undaunted and will continue advocating for the rights of indigenous people worldwide.

“This is what I promised to do before the United Nations and before indigenous people in different parts of the world. I will still continue to do what I need to do,” she said.

At present, Tauli-Corpuz is heeding advice from the UN Security Officer in the Philippines for her safety. She did not disclose details on whether she is leaving the country or not, but said that she is constantly updating the security office of her whereabouts.

While she did not appeal to President Duterte to call off the petition, she called on the president to seriously consider checking that government instituions do not impede upon democratic rights.

“We need to ensure that democracy in this country continues to prevail,” she said.