A paddleboard and windsurfer manufacturer is on a mission to reclaim its emissions by adopting circular economy principles and reforesting a nature reserve in Myanmar.

Feeling remorseful about the environmental impact of his company, Svein Rasmussen is on a mission to make amends for all the emissions it has produced in 25 years of operations.

The Norwegian national began offsetting his company’s annual emissions through a mangrove tree planting project in Thor Heyerdahl Climate Park in Myanmar four years ago, he told Eco-Business in a recent interview about Starboard, his Bangkok-based business that produces water sports equipment such as paddleboards and windsurfers.

“We’re reducing between 15 and 20 per cent of our emissions, but reductions are incremental and will not get us to zero carbon. But when you plant mangrove trees, that’s when you get momentous change,” Rasmussen said.

Mangrove trees, which grow in coastal areas in saltwater, have been found to remove up to five times as much carbon dioxide from the air as rainforest trees, storing it in their leaves, branches and in the soil.

Starboard has been planting mangroves to offset an amount of carbon dioxide 10 times the size of its annual footprint, with the ultimate aim of taking back every kilogram of carbon it has ever released. It has planted 140,000 trees in the park so far.

“It’s hard to go back in time, so all we can do is estimate our footprint from the last 25 years and plant enough trees to see that it is taken care of,” explained Rasmussen.

The company last month mooted the idea of a plastic bag fee at an Association of Southeast Asian Nations meeting in Bangkok, and organises clean-ups of waterways in Bangkok. “Oceans are filling up so quickly that we don’t have time for the usual [slow] evolution of policies,” he stressed. “We want to connect with any major influencing party, from the military to the chamber of commerce, to fast track the evolution of plastic regulations.”

The tide of change

At the same time, the company is getting its house in order when it comes to plastic use. Starboard joined the Plastic Disclosure Project by the non-profit Ocean Recovery Alliance, under which companies measure the amount of plastic they use and aim to reduce it in the long term. Starboard ran a plastic audit last year.

“When we did the calculations, it dawned on me that most of the boards and products that we make come from fossil fuels,” he told Eco-Business. “The paint, the mat on top of the paddleboard, the resins—all of it.”

Ninety per cent of the raw materials the company used in production were derived from these finite resources. “That means 90 per cent of our profits come from fossil fuels even though we don’t use single-use packaging. I felt very guilty,” said the Norwegian-born water sports enthusiast.

This drove Starboard to look for ways to reduce its plastic use and carbon footprint, and enable other organisations to do the same.

Last year Starboard launched what it calls the world’s first Plastic Offset Programme in partner with the Ocean Recovery Alliance, encouraging other firms to take a hard look at and improve their plastic use.

The company assigned a financial value to the social and environmental cost of using plastic, and channeled that money into a fund for research and development and supported non-government organisations that combat ocean plastic.

“We have created a fund based on the plastic used in our products, which we will invest back into projects that protect the ocean—our greatest resource and the big blue playground for paddlers and windsurfers worldwide,” said Rasmussen in a statement.

Starboard also searched for better ways to manufacture its products and reuse plastic. Even if an item is made of durable plastic, companies need to consider how these can be disposed of at the end of their lifespan, Rasmussen said.

“We need to look at how we can reduce the amount of plastic that goes into a product, how the plastic can come from recycled or bio sources, and what is an acceptable end of life system for it,” he elaborated.

Plastic has come under the spotlight in the last two years as the social and environmental impacts of the miracle material of the 20th century became increasingly clear to the general public.

Microplastics, formed when plastic waste is carried out to sea and broken up into smaller pieces, is consumed by sea life that forms part of the human food chain. The tiny bits of plastic were recently found in human excrement for the first time.

Plastic pollution is also killing marine life including, most recently, a sperm whale that was found washed up on a beach in Indonesia with more than 1,000 pieces of plastic in its stomach.

Earlier this year Starboard announced that it had begun manufacturing parts of its products with plastic salvaged from discarded fishing nets, leading to a 14.4 per cent drop in the company’s emissions through a partnership with DSM.

The Dutch multinational works with coastal communities in India who collect, clean and process the nets so they can be converted back into plastic material called Akulon Repurposed that is sold to manufacturers for production. 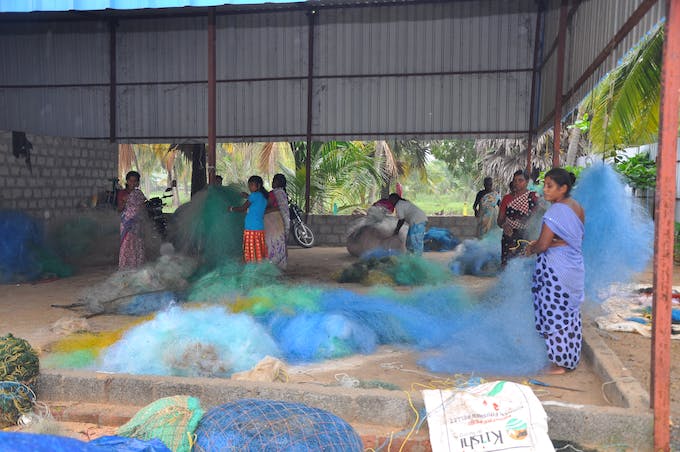 Around 2,000 tonnes of nets are collected and recycled each year through DSM’s programme, which has created jobs for 300 individuals in low-income coastal communities, said Matt Gray, commercial director for Asia Pacific at DSM Engineering Plastics.

It’s a drop in the ocean compared to the 640,000 tonnes of nets that make up 10 per cent of all plastic waste in the sea. Explaining the focus on fishing nets, Gray told Eco-Business that fishing nets are a good source of plastic because they are made of nylon, a material that DSM already makes.

“It’s a true circular economy. We use nylon-based fishing nets and fishing lines, and we’re pulling the material back out of the environment,” he said.

Fishing nets are also easy to clean and recycle, while general plastic waste is easily contaminated and therefore unusable, he added. “It is necessary to capture as much value from waste streams as possible, which is an idea that’s central to the concept of a circular economy.”

The Akulon Repurposed feedstock DSM produces may be reinforced with glass - depending on how the feedstock is intended to be used - to ensure that the materials perform to the same levels as new plastic, and already outdoes other forms of recycled nylon available in the market, said Gray.

Besides using upcycled plastic, Starboard replaced 33 per cent of the fossil fuel-based resin it needs with a recyclable, plant-based bioresin that resulted in a 20.7 per cent reduction in carbon emissions. The manufacturer’s plastic usage totalled 317.96 tonnes in 2017, which fell to 298.5 tonnes by 2018.

Does Rasmussen foresee a world that could be completely plastic free?

“Let’s put it like this—plastic will always be there, but in a more useful way, like prosthetic limbs. It is silly to use such a fantastic material for single-use items,” he said.

Rasmussen added: “We also need to think about [recycling waste] differently. DSM is are doing what we’ve needed to do for a long time, namely retrieve the waste in nature today and find an economic model that works.”