Southeast Asia on energy path for 650,000 premature deaths from air pollution by 2040: IEA

Energy demand is booming, but government policies signal continued reliance on oil, gas and coal. Much stronger action is needed to improve renewables deployment and energy efficiency, said IEA in a new report.

Southeast Asia is on an energy path that suggests little change from today’s congested roads and urban air pollution, according to a new report from the International Energy Agency (IEA).

The region’s energy demand is set to grow by 60 per cent by 2040 and, based on policy targets announced by its governments, the number of premature deaths from fossil fuel-linked air pollution in Southeast Asia could rise to over 650,000 by 2040, up from an estimated 450,000 last year.

The region’s lusty demand for oil and gas means it will be increasingly dependent on imported fossil fuels.

Despite having its own resources, Southeast Asia is set to become a net importer of fossil fuels in the next few years. In 2040, it could register a US$300 billion deficit in energy trade per year, putting it on shakier ground when it comes to energy security, said the IEA in its Southeast Asia Energy Outlook 2019 report released on Wednesday.

Initiatives from individuals, civil society, companies and investors can all make a difference, but the greatest capacity to shape Southeast Asia’s energy destiny lies with governments.

The region—the only part of the world where coal’s energy share will grow in the next two decades—must deploy much more renewable energy and majorly improve energy efficiency if it is to hold up its end of the Paris Agreement, which seeks to cap global warming at no more than 2°C above pre-industrial levels by 2100, said the agency.

And governments hold the key to a more sustainable energy path.

“Initiatives from individuals, civil society, companies and investors can all make a difference, but the greatest capacity to shape Southeast Asia’s energy destiny lies with governments,” the IEA stated in the report, released at Singapore International Energy Week 2019 (SIEW). 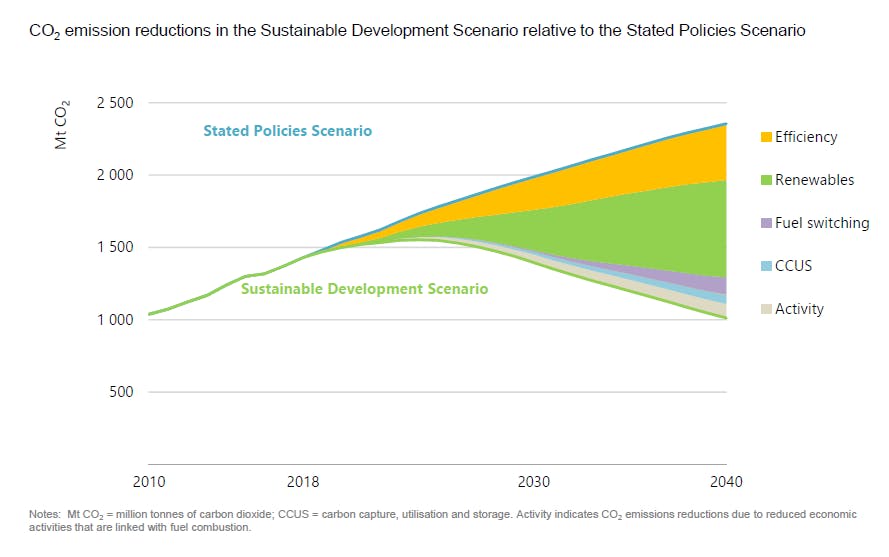 The IEA’s report does not forecast what the energy sector will look like over the next two decades, but merely considers two futures. One is based on policies and ambitions that have been declared and the continued evolution of known technologies; the other scenario is based on what’s needed to meet sustainable development goals.

Based on its current path, renewable energy would only meet about one-third of Southeast Asia’s growth in electricity demand, and the share of renewables in its power mix will rise from 24 per cent today, to 30 per cent by 2040.

This lags Asian giants China and India, where renewables could account for above 40 per cent of power generation by 2040, said the IEA.

At a panel discussion on the challenges and opportunities in Southeast Asia’s energy landscape at SIEW, comments by Sadamori and ExxonMobil Research and Engineering Company’s Dr Vijay Swarup about the affordability of coal, and transitioning from coal to gas, prompted an attendee to question their emphasis on fossil fuels.

The burning of coal for energy is the single biggest contributor to man-made greenhouse gas emissions.

It’s really baffling to me to hear you speak about adding to the fossil fuel load in this region when… the abundance of natural resources allows for the scalability of renewables.

“Why should this region invest in switching from coal to gas, when at the moment the penetration of renewables is still very modest and, at the same time, the cost of the power generation technologies (from renewables) is more cost-effective than any other form of power generation?” asked Kortenhorst. “It’s really baffling to me to hear you speak about adding to the fossil fuel load in this region when… the abundance of natural resources allows for the scalability of renewables.”

Sadamori said his comments were based on the current policy ambitions of Southeast Asian countries and agreed that the sustainable development path is good for the environment and the economy.

But the deployment of renewables requires flexibility in electricity systems, and supply must remain stable, he said. At the moment, it is mostly conventional power sources that are providing that flexibility.

Swarup, who said countries have opted for coal because it is affordable, scalable and transportable, replied that the region would depend on a combination of energy sources. “It’s not ‘either-or’,” he said.

Borneo, the battery of the region?

More consistent policy frameworks to attract investment, as well as system integration improvements are needed for greater deployment of renewables, said the IEA in its report.

The region has to get its energy prices right by phasing out fossil fuel subsidies, the agency said. Fossil fuel consumption subsidies amounted to about US$35 billion in 2018, or nearly 0.5 per cent of gross domestic product.

A regional power grid would enable renewable energy, especially wind and solar power, to grow, the IEA noted. This is because aggregation would reduce the system variability of wind and solar output, and allow access to a larger pool of flexible resources.

However, Damian Chan, assistant managing director of Singapore’s Economic Development Board noted at a session at the Asia Clean Energy Summit, which is part of SIEW, that an Asean power grid, which has been under discussion for almost two decades, is “still a pipe dream—literally”.

Leadership and political will are needed for cross-border power sharing, said Sharbini Suhaili, group chief executive of Sarawak Energy, at the panel discussion.

Sarawak Energy is the primary electricity provider in Sarawak and is owned by the government of the Malaysian state.

Rich in hydropower, Sarawak’s grid is already linked to Indonesia’s West Kalimantan, and it is looking to connect to the neighbouring state of Sabah and the neighbouring country of Brunei, he said.

“The island of Borneo could be the battery of the region,” he declared.