The near-term targets focus on carbon-intensive clients, but exclude agriculture and chemicals, which the bank says are too complex to measure and track.

DBS, Southeast Asia’s largest bank, has announced interim targets that it aims to hit on the way to achieving net-zero emissions by 2050.

The Singapore-headquartered company committed to decarbonise its lending portfolio to net-zero by 2050 last October and the new targets, unveiled on Tuesday, detail a carbon-cutting schedule for heavily-emitting sectors by 2030 and 2040.

The new targets emerge the week after Singapore announced a revised national net-zero target for 2050.

The sectors DBS has focused on – power, oil and gas, automotive, aviation, shipping, steel and real estate – represent the “vast majority” of the group’s financed emissions, the bank said, without breaking them down by industry.

While more than 100 banks have pledged to cut their carbon exposure to net-zero by 2050, mid-century is increasingly seen as too far off to constitute meaningful climate action.

DBS chief executive Piyush Gupta said committing to net-zero by 2050 “when three successors after me would have to wrestle with this problem” was not ideal, so nearer term targets were needed.

DBS said it is one of the first banks globally to set interim targets, and its commitments are ambitious as the bank operates in emerging markets where the energy transition has been relatively slow.

There is a lot of scepticism around why banks do this [set net-zero targets] – are we greenwashing? You’ve got to believe that we tried to do this because we think it is the right thing to do.

“What we are committing to is not pie in the sky,” said Gupta, acknowledging that persuading clients to decarbonise was not easy in emerging Asia. “Sometimes clients have energy security issues, so it [decarbonisation] goes on the backburner,” he said.

DBS’s most notable target is for the oil and gas sector.

The bank is aiming to reduce Scope 1, Scope 2 and Scope 3 emissions – that is, emissions from its direct operations to those in the value chain – of its oil and gas portfolio to net-zero by 2050.

Bruce Robertson, an energy finance analyst for the thinktank Institute for Energy Economics and Financial Analysis (IEEFA) said DBS’s aim to cut the absolute emissions from oil and gas was “impressive” as it is the hardest sector to abate.

He said that interims targets showed that DBS is “taking decarbonisation seriously” and the bank is among the frontrunners in the region to clean up its lending portfolio. 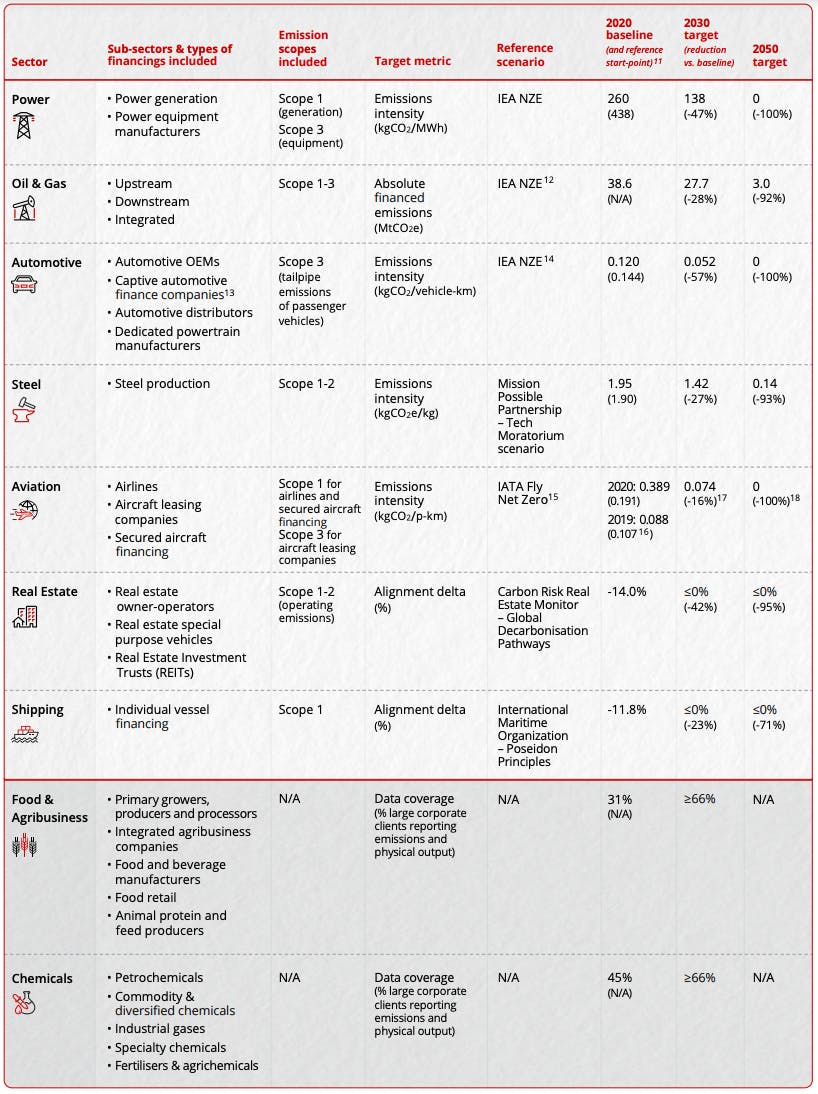 DBS has not set targets for agriculture and chemicals, because these sectors are currently too complex to measure and track, the company said in a summary of its net-zero plan. It plans to gather more data from these sectors before it sets a target to reduce emissions.

The bank’s 2050 net-zero target is aligned with the International Energy Agency’s (IEA) Net Zero Emissions by 2050 Scenario. It has not been verified by the Science Based Targets Initiative (SBTi), which aligns decarbonisation targets with the Paris climate accord.

DBS head of sustainability for institutional banking Yulanda Chung said compliance with SBTi was problematic as the standards require a “very quick retreat from fossil fuels”.

“It remains credible to say that [DBS’s net-zero target] is science-based, because we have opted for the reference pathways from the IEA – which is one of the most stringent pathways you can find,” she said.

Gupta said the bank is open to selling its coal porfolio with a view to closing the projects down – the Asian Development Bank hatched a plan to fund coal plant closures at the COP26 climate talks – but added that selling coal projects to other lenders “would not change anything for planet Earth”.

Gupta said that DBS’s renewables portfolio was worth about US$10 billion, while the bank’s coal portfolio amounted to US$1.5 billion, or about 0.3 per cent of its lending book.

DBS’s announcement comes a month after the bank was accused of greenwashing its commitment to stop financing coal after it promoted its pledge on LinkedIn with the marketing slogan “More like an eco warrior, less like a bank.”

Critics said that delaying coal divestment until 2039 was indicative of how some finance groups have been delaying climate action.

Gupta told journalists today: “There is a lot of scepticism around why banks do this [set net-zero targets] – are we greenwashing? You’ve got to believe that we are doing this because we think it is the right thing to do.”

This week, the bank announced that is the first Asian bank to enter a virtual world known as the Metaverse to promote its sustainability efforts.