Satellite images have revealed the illegal discharge of waste oil and sludge from ships to be a daily occurrence in Indonesia, while Southeast Asia's biodiverse waters suffer more from the problem than anywhere. What can be done to stop the destructive practice of bilge dumping?

Piracy. Illegal fishing. Slavery. The issues facing the shipping trade are increasingly well known and a highly traditional industry has at last started to confront them. But one important issue, which is as old as the trade itself, has been largely overlooked: bilge dumping.

Bilge dumping is when ships illegally discharge untreated, oily wastewater—which collects in the bilge of the ship, which is part of its hull and the lowest part of the vessel—into the ocean, breaking an international law called the International Convention for the Prevention of Pollution from Ships, or Marpol. The law, which has been in place since the 1970s, requires ships to treat bilge water by removing the oil before it is released into the sea.

The thick oil slicks from bilge dumping stay on the water’s surface until they’re broken down by waves and the wind, dispersing toxins that harm marine ecosystems and coastal communities. 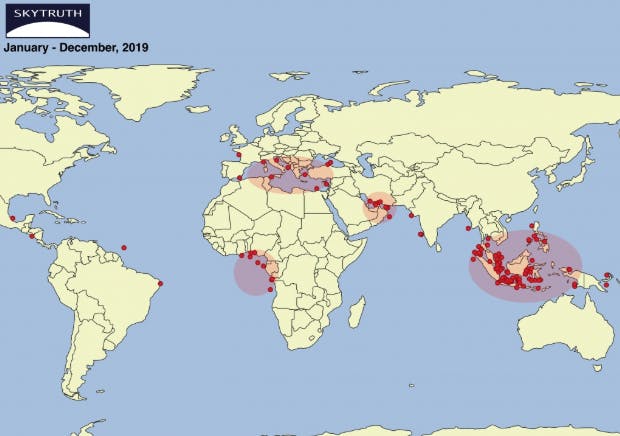 The problem is particularly acute in Southeast Asia. According to 2019 data from Skytruth, an organisation that monitors oil pollution globally using satellite imagery, the regional bloc recorded by far the most incidences of bilge dumping globally (see map, right) last year.

According to Orbital EOS, a Spanish firm that also monitors oil spills via satellite, bilge dumping is a daily occurrence in Indonesia as ship operators seek to avoid the cost of the responsible disposal of bilge water when they dock.

After Eco-Business ran a story on a recurrent oil leak documented by Orbital EOS off the coast of Aceh last week, a Paris-based executive working for business school INSEAD, Luke Thomas, contacted the chief executive of Orbital EOS, Juan Peña Ibañez, to tell him about his experience on holiday in Bintan, an Indonesian resort island near Singapore, in January.

Ships entering Singapore need to be clean, and as the costs of cleaning [bilge waste] in the ports of Singapore are very high, some ships dump their waste off the coast.

While staying at the Angsana Bintan Resort, Thomas and his wife found large clumps of oil covering beaches near their resort. 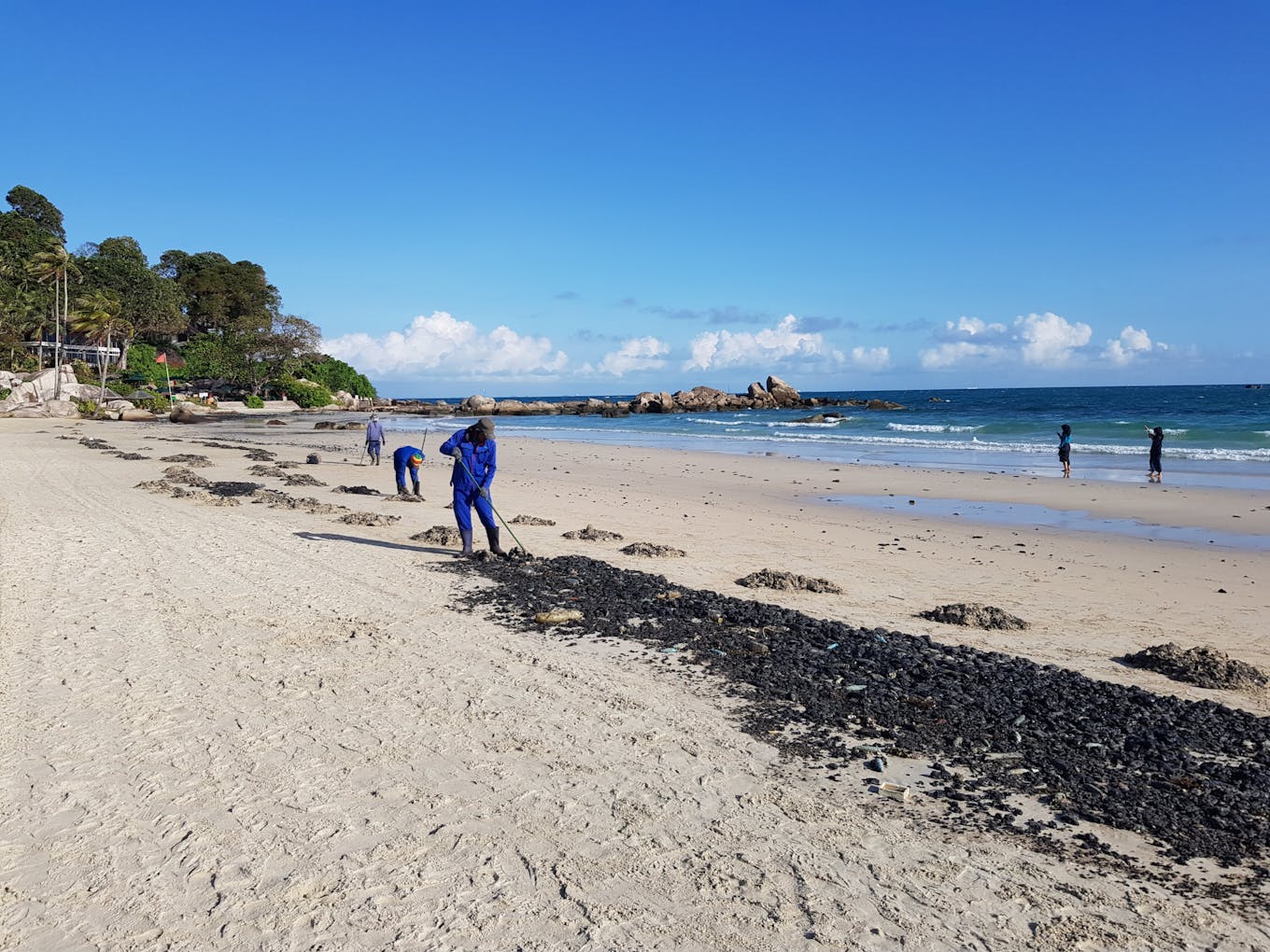 Cleaners removing oily clumps from a beach in the resort island of Bintan, Indonesia, near Singapore, in January 2020. The oil waste is believed to be the result of daily bilge dumping before ships dock in Singapore. Image: Luke Thomas

“I spoke to the resort marine biologist who was part of the staff clean-up team. He told tell me that this is a regular occurrence and is the result of bilge dumping,” said Thomas.

Indonesia is highly dependent on fisheries. Why would you want to deep-fried your fish in oil before they’re caught?

“Ships entering Singapore need to be clean and, as the costs of cleaning [bilge waste] in the ports of Singapore are very high, some ships dump their waste off the coast,” added Thomas, who was told by his resort’s marine biologist that while the problem had persisted for the last decade, it is getting worse. 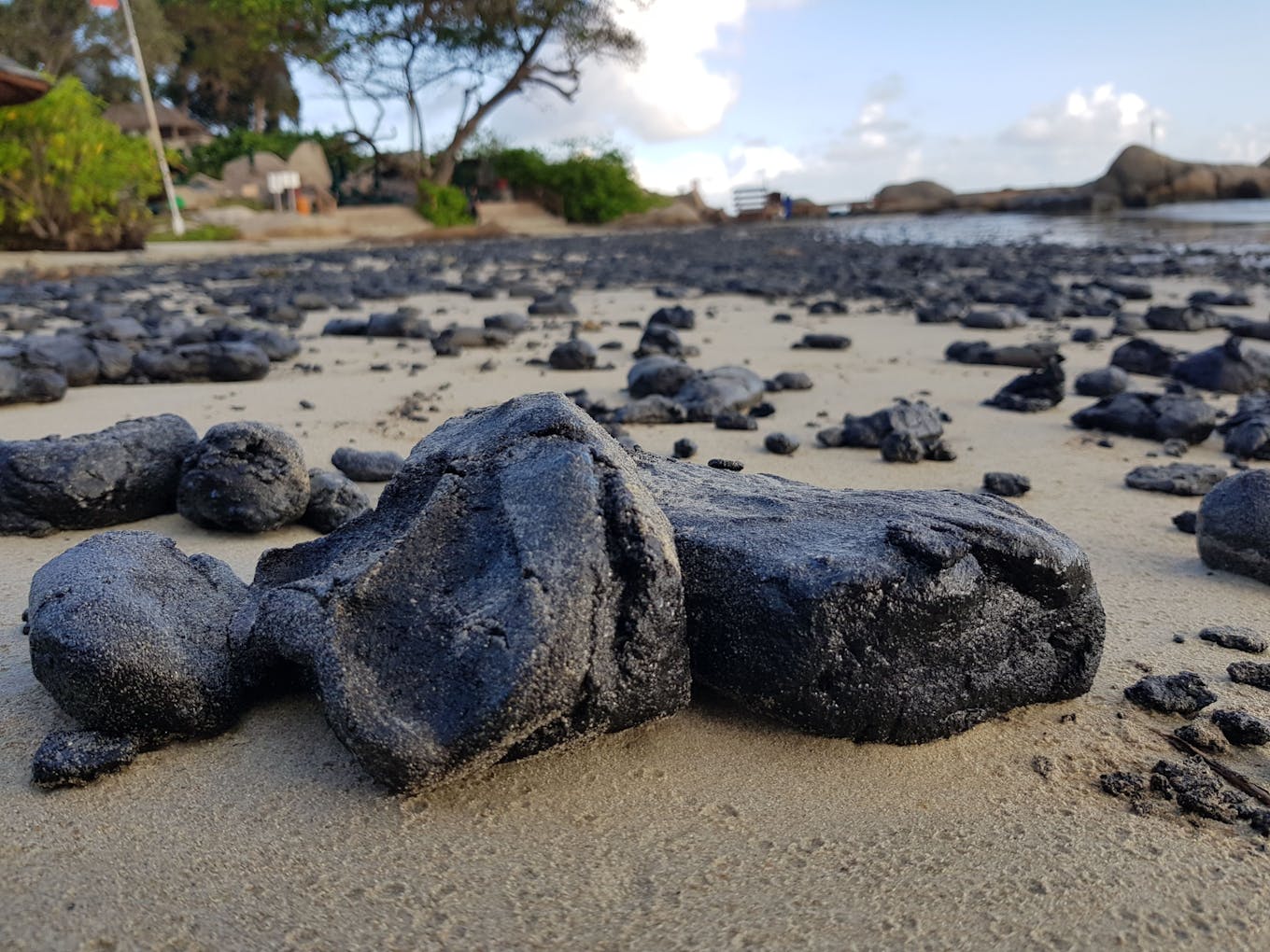 What can be done about bilge dumping?

One problem is that bilge dumping does not seem to be a high priority for the shipping industry.

Eco-Business contacted the International Maritime Organisation (IMO), and was told to contact the Indonesia Sea and Coast Guard to alert them to the issue.

Eco-Business has reached out to Indonesia’s coastguard and its representative for the Marine Environment Protection of the South-East Asian Seas (MEPSEAS), an IMO-backed project to address shipping-related environment issues in the region, but has not received a response.

IMO told Eco-Business: “Flag states have jurisdiction on the ship and should enforce the requirements [of laws such as Marpol]. Port states and coastal states have rights and responsibilities to monitor and enforce compliance and parties to Marpol should develop national legislation for sanctions for violations of the treaties.”

Eco-Business also contacted the Sustainable Shipping Initiative (SSI), a Denmark-based shipping industry coalition set up in 2011 to tackle the social and environmental challenges the industry faces. SSI, which recently launched a ship recycling transparency initiative, told Eco-Business that it does not specifically focus on bilge dumping, and noted that generally more transparency was needed over shipping operations to hold the industry to account.

The Maritime and Port Authority of Singapore did not respond to Eco-Business’s request for comment on bilge dumping.

Hans van Mameren, co-founder of Singapore-based renewables firm Energy Renewed, who has 50 years of experience in shipping, told Eco-Business that while bilge dumping “is not right”, there is little incentive to confront the problem as it does not harm trade.

“You need political and regulatory pressure. Whether Indonesia likes it or not, it’s [bilge dumping] happening in their territory. Indonesia is active at tackling illegal fishing. Why don’t they police bilge dumping too?”

Indonesia, the world’s largest archipelagic country, is highly dependent on fisheries, noted Mameren, who is working on a plan to electrify one million diesel boats in Southeast Asia. “Why would you want to deep-fry your fish in oil before they’re caught?”

Ibañez noted that finding the ships responsible for oil spills is not always easy, and several sources of data have to be used to catch the culprit. Law enforcement programmes have to work in a coordinated manner and monitoring programmes have to be developed to raise awareness about a problem that is otherwise invisible to the public, he said.

Traditional maritime surveillance tools are ships and aircraft to patrol coastal states, but aerial surveillance is expensive and many countries lack the resources to deploy regular patrols, he said. Modern approaches such as drones, satellites, and automatic identification systems (AIS), which use data from tracking devices on ships, could help address bilge dumping, he added,

“The first thing we can do to address the issue is to make it visible and raise awareness. In Europe, a strong deterrent effect has been the main key consequence of monitoring programmes that have been running for a decade,” he said. Ships caught bilge dumping in Europe face heavy fines and even jail for ship captains.