Ethical investing is on an unstoppable rise in Australia, says a new report by the Responsible Investment Association Australasia. This debunks the myths that Australians don't care how their pensions are invested, and that responsible investments underperform.

Ethical investing is on an unstoppable rise in Australia, and responsible investments account for a whopping A$629.5 billion - or half of all assets under management in the countryat the end of 2014, a new report has found.

Published on Tuesday - the same day that Australian Prime Minister Tony Abbot unveiled an emissions reduction target that was criticised for being inadequate and declared that “we are not going to clobber the economy to protect the environment” - the report showed that responsible funds are outperforming industry benchmarks and in some cases, even mainstream investment funds.

Simon O’Connor, chief executive, RIAA, said that “consumers in ever greater numbers are awakening to the fact that you can invest prudently and profitably without compromising your values”.

He added that institutional investors are also awakening to the importance of responsible investment, especially after seeing several companies listed on the Australian Stock Exchange lose shareholder value after mismanaging their environmental and social responsibilities.

Australia’s largest asset managers are taking note of these concerns, and at the end of last year, managed A$598 billion in assets under ESG integration strategies.

These could include screening, which rules out putting money into certain sectors like alcohol or animal testing; impact investing, which is targeted investment aimed at social and environmental problems while also delivering financial returns; or sustainability-themed investments in areas such as renewable energy.

Investments managed under such strategies were worth A$31.6 billion at the end of 2014 – a 24 per cent increase from the previous year – found the report, which is now in its 14th year and based on data collected from Australian investors, financial advisors and fund managers through a survey, and publicly available data about asset values and their performance. 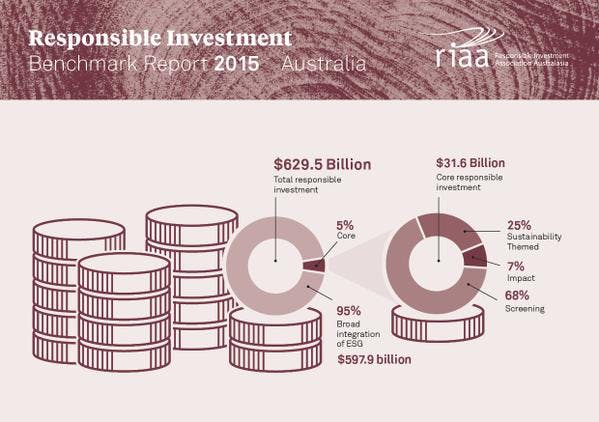 An overview of the responsible investment industry in Australia. Image: RIAA

Not only do responsible investments achieve social good, they also measure up favourably when it comes to profits, found the report. On average, responsible investment funds in Australia out-performed industry benchmarks and their mainstream counterparts over the short, medium, and long term.

Once again, “the myth of under-performance of responsible investments is unfounded,” said RIAA.

Several factors account for the rise of responsible investing, said O’Connor. Key among them is the fact that the finance sector is beginning to take a strong position on controversial issues such as tobacco and fossil fuels. For example, Norway’s sovereign wealth fund, Stanford University, and French insurance company AXA all decided earlier this year to sell off some of their coal investments.

Civil society and activist groups have also been targeting the financial sector recently in a bid to change how the companies they invest in operate. Consumers, too, are beginning to demand that their retirement savings should be invested in a way that aligns with their beliefs and values, observed O’Connor.

“The notion that Australians are disengaged from their superannuation has started its terminal decline,” he said.

“Those investors who are taking account of environment, social, and ethical issues in addition to financial issues are well positioned to capture this wave of growing demand.”