Coffee pods often spark concerns about the immense amount of trash they generate. Eco-Business takes a look at how Swiss firm Nespresso makes sure its capsules don't end up as waste, and supports an organic farm in Singapore in the process.

While single-serve coffee pods have grown popular in recent years for their convenience, they have also sparked concern among environmentalists due to the massive amounts of waste they generate.

This has prompted some capsule coffee makers like Nespresso—owned by Swiss food and beverage giant Nestlé—to roll out large-scale recycling programmes to assure customers that their coffee habit does not come at the cost of the environment.

Nespresso drinkers around the world know that when they return used pods to the company,  the aluminium is recycled into new products such as window frames, food packaging and bicycles. The company has the capacity to collect and recycle 86 per cent of its capsules today , and aims to raise this to 100 per cent by 2020.

It has set up more than 14,000 capsule collection points in 31 countries, and collects capsules directly from customer’s homes in 15 countries worldwide.

In Singapore, people can drop off used capsules at either of Nespresso’s two stores, at Ion Orchard or Ngee Ann City malls in the city centre, or hand them to the courier when ordering capsules online.

Members of Nespresso’s coffee club who recycle their capsules are also rewarded with a 10 per cent discount voucher for purchasing fresh, organic produce from Quan Fa Organic Farm.

This is because since 2014, all the coffee grounds from recycled Nespresso capsules are given to Quan Fa, which turns them into fertiliser and compost.

Tucked away in west Singapore’s Lim Chu Kang neighbourhood, Quan Fa Organic Farm is a family business that grows local greens such as kailan, bokchoy and kangkong; vegetables like French beans, cucumbers and eggplants, and herbs including coriander, sweet basil and ginger. The two-hectare facility uses no pesticide or chemical fertilisers to grow its produce. 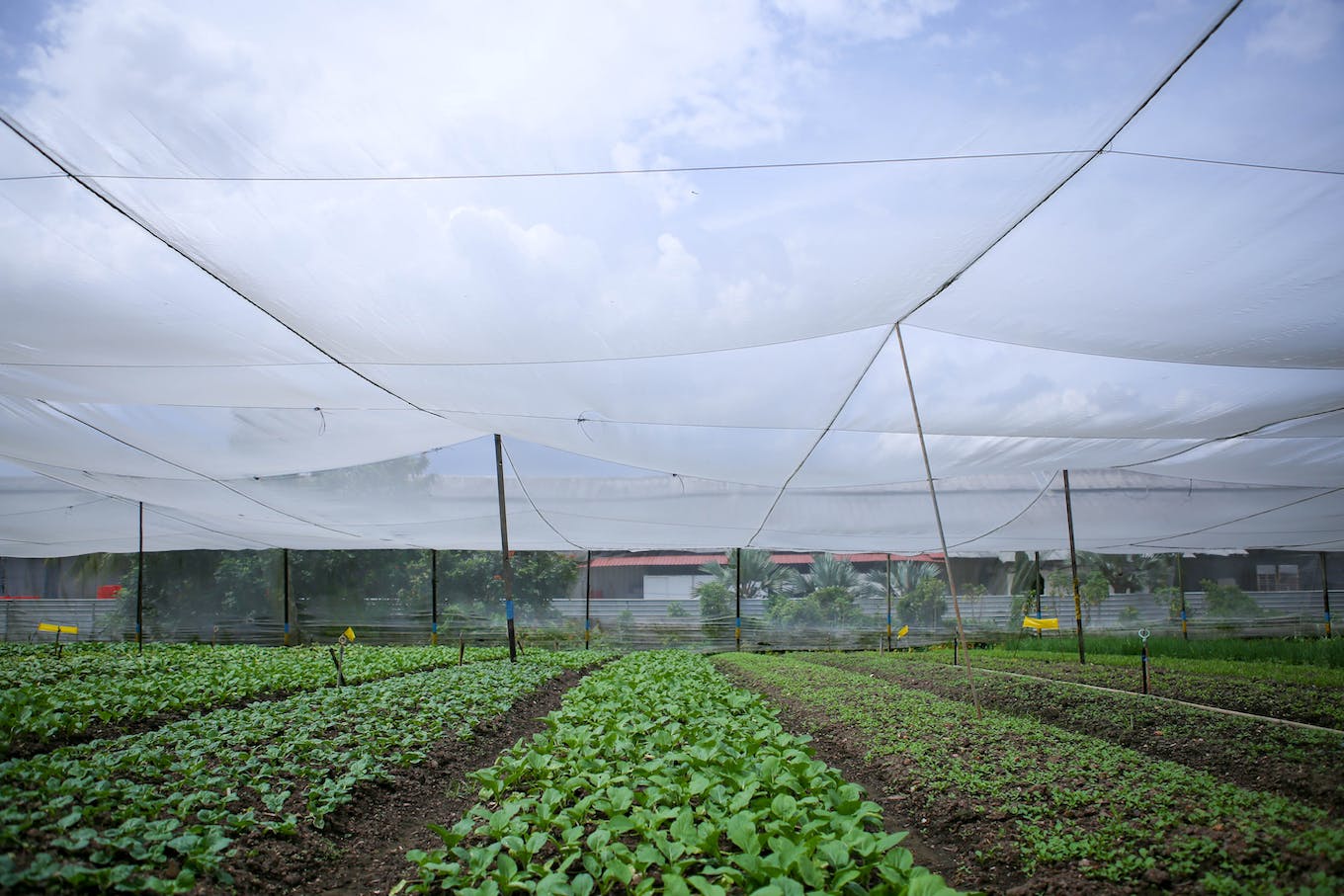 The most popular vegetables at Quan Fa Organic Farm are the caixin, kailan, baicai (pok choy) and xiaobaicai (baby pok choy). The yellow strips of tape suspended above the crops are sticky paper, which traps flying pests since the farm does not use pesticides. Image: Nespresso Singapore.

Instead, the farm’s main method of pest control is strips of fly paper strewn all over the farm, and the crops are grown in a mixture of soil and organic compost made using the coffee grounds, food waste and sawdust. 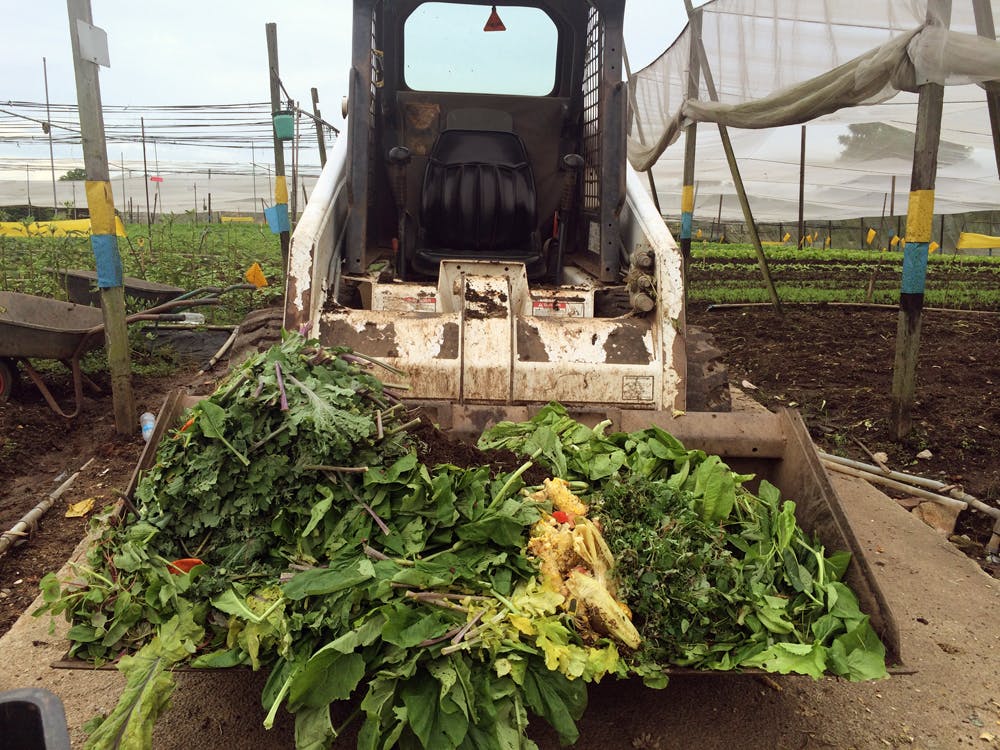 By-products from crop cultivation and even the waste from uneaten worker’s meals are composted and used as fertiliser on the farm. Image: Eco-Business

Fabian Liao, Quan Fa’s marketing executive, tells Eco-Business that the coffee grounds provided by Nespresso helps save labour and reduce water use on the farm.

“The coffee grounds are acidic, which repels snails,” he explains. “Previously, our small team of farm workers would have to manually pick them out of the crops and salt them, so this saves them a lot of time”.

The use of coffee grounds in the soil-compost mixture also improves its ability to retain water, says Liao. “We can now use less water for the plants”. 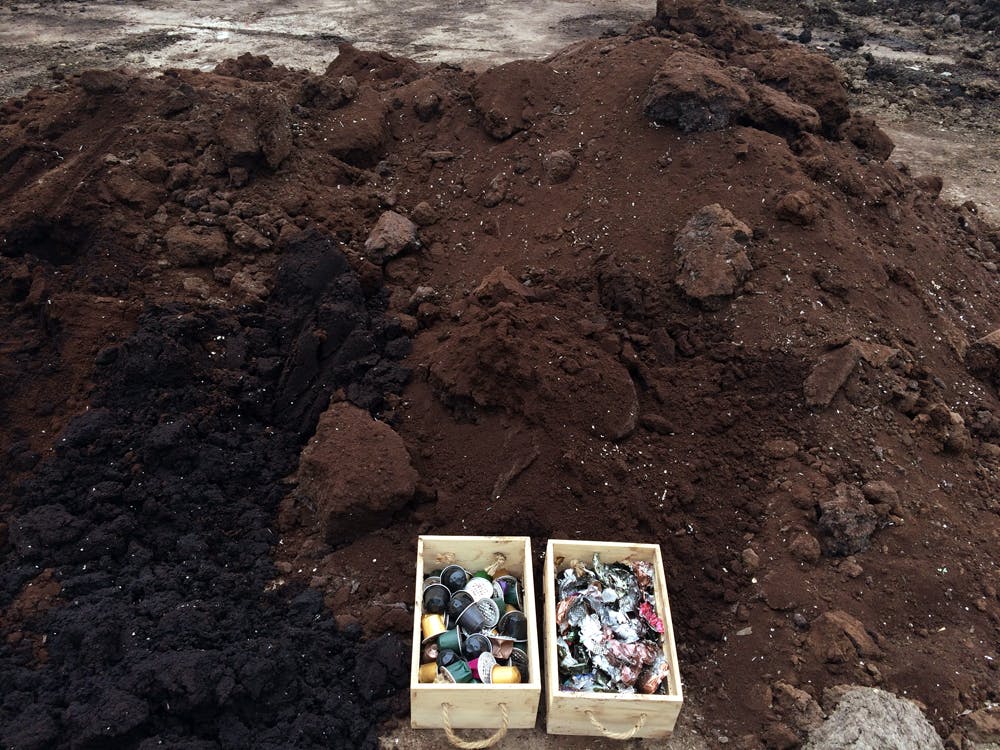 Used Nespresso capsules will be mixed into the soil and coffee grounds. Image: Eco-Business 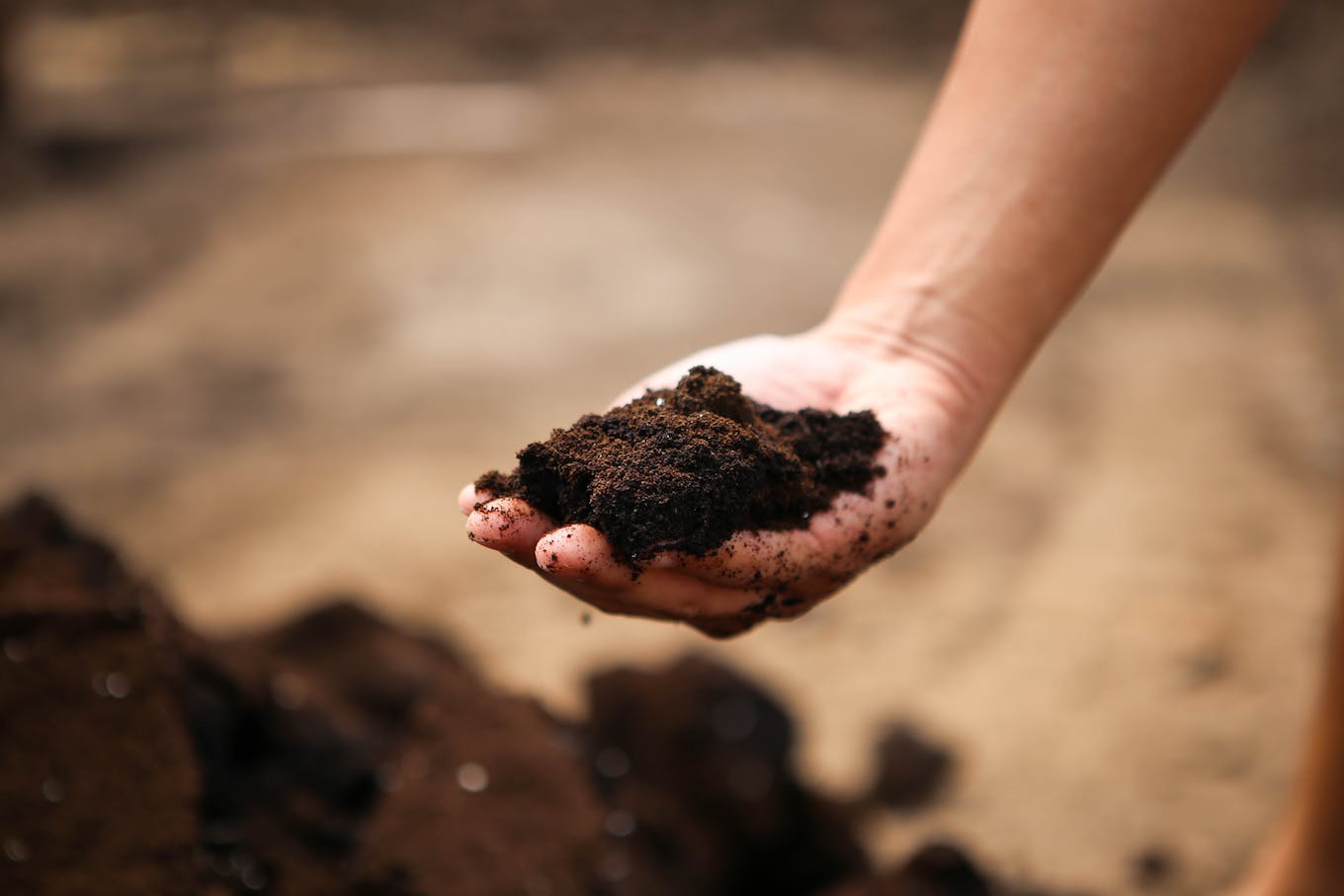 Matthieu Pougin, country manager for Nespresso Singapore, says that the partnership enables Nespresso to recycle all components of its coffee capsules.

“It was very important to us to have a local partner here in Singapore as we can reduce the carbon footprint by avoiding shipping the by-products overseas,” shares Pougin. “It was also a nice way for us to engage our local consumers into our sustainability and recycling programme”.

Unlike plastic, drink can and paper recycling in Singapore, where members of the public can’t see where these products end up, the partnership with Quan Fa Organic Farm allows Nespresso customers to see what the coffee pods are reused for, and the benefits of recycling them. 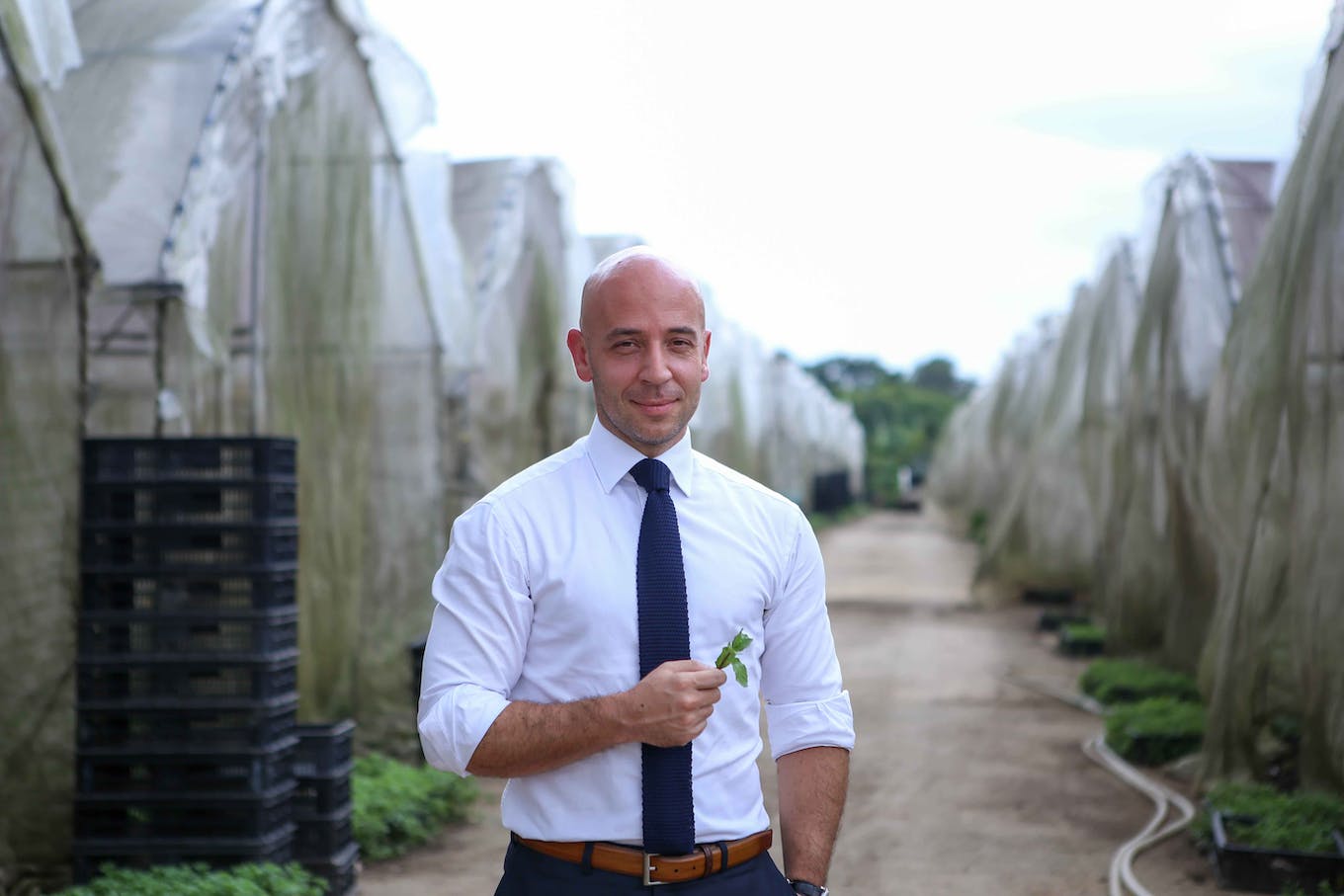 While the company recycles its coffee grounds domestically, it ships the aluminium from its pods to nearby countries such as Malaysia or South Korea for recycling, because Singapore does not have an aluminium smelting plant. The company is working on ways to recycle or reuse the aluminium in Singapore, says Pougin.

However, he declines to say what proportion of Nespresso capsules sold in Singapore come back via the recycling initiatives.

Technically, the firm has the capacity to collect back 100 per cent of all capsules in Singapore. But Pougin says that Nespresso does not count or weigh the recovered capsules to figure out how much of this capacity is being used. Instead, it measures the success of its recycling programme by quantifying consumer’s awareness and commitment to recycling via market surveys.

Nespresso spends a “significant” share of its revenue in recycling efforts, he adds.

It also invests in the equipment and services to collect and shred the capsules, and separate the grounds from the aluminium. Nespresso then simply gives the by-products to recyclers, instead of selling it.

As Pougin puts it: “All our revenue comes from coffee sales, not from aluminium trading”.

Nespresso in April also launched launched its “One Pod at a Time” campaign in Singapore, which stresses the importance of recycling capsules to Singapore shoppers. Its regular roadshows to highlight its recycling initiatives are also points where customers can deposit their used capsules. 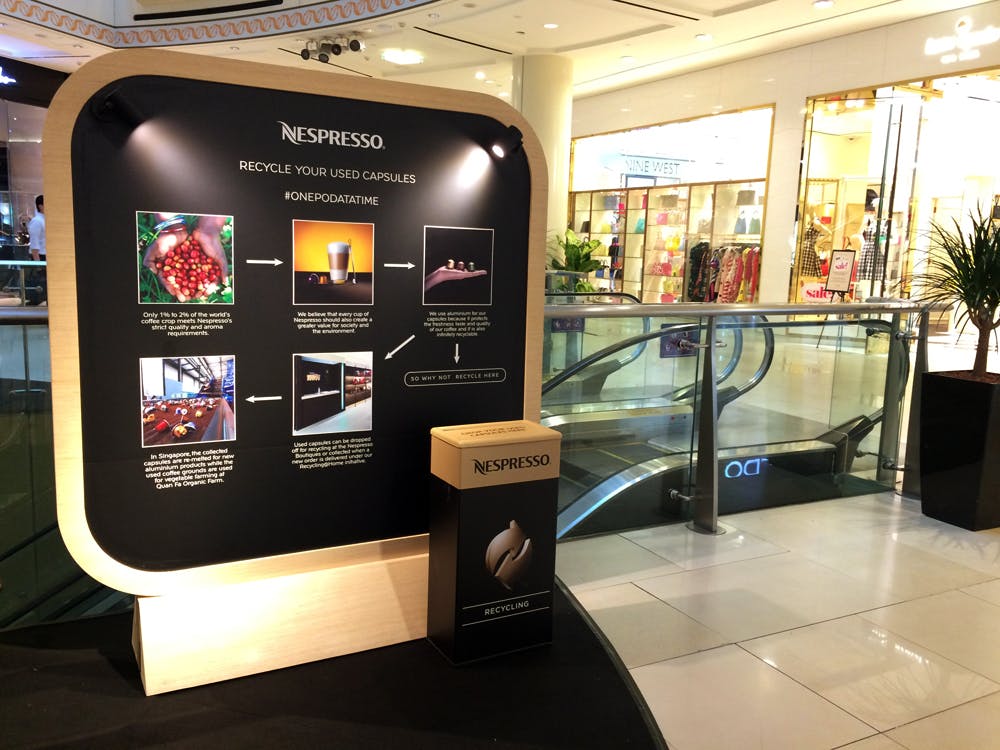 While Nespresso hopes to reduce waste from coffee pods, it also notes that the biggest share of a coffee pod’s environmental impact comes from how it is cultivated and the machine used to make the coffee.

As a result, the company is training its farmers on more sustainable cultivation methods, introducing energy-saving features such as an auto-off mode in all its Nespresso machines, and making its factories more energy and resource efficient.

Thanks to these efforts, Nespresso has reduced the carbon footprint of a cup of its coffee by more than 20 per cent between 2008 and 2012, and aims to reduce it by another 10 per cent by 2020.

According to Pougin, Nespresso’s environmental efforts across its life cycle—and the fact that each cup of Nespresso requires a smaller quantity of coffee grounds to make than conventional espresso—actually make Nespresso a more sustainable option than alternative methods.

The jury appears to be out on this claim—while a 2009 study finds that capsule coffee has a smaller carbon footprint than a cup of drip filter coffee, other research, conducted in 2011 says: “If one assumes that in the case of filter coffee the whole pot is drunk and in the case of soluble [instant] coffee only as much water is boiled as necessary, then these two methods of making a cup of coffee are by far the most environmentally friendly.”

But as far as capsule coffee goes, Nespresso’s commitment to making the product as sustainable as possible is evident.

“For us, we don’t see this as an effort because sustainability is part of our brand’s DNA,” says Pougin. “We want our consumers to enjoy the coffee, but also want them to know that they are contributing to something good”.