Fossil fuel subsidies totalled at least $373bn globally in 2015, according to a new report which for the first time combines figures from two key intergovernmental organisations.

The new figure harmonises estimates up to 2015 from the Organisation for Economic Co-operation and Development (OECD) and the International Energy Agency (IEA), which largely assess different countries in their estimates of fossil fuel subsidies.

The OECD inventory of fossil fuel “support”, released last week alongside the report, also includes new, separate figures for subsidies in 2016 for the 35 OECD countries and eight large developing nations. (The OECD is a collective of market-based economies, first formed in 1960, which aims to be a “forum for governments to work together to share experiences and seek solutions to common problems”.)

The report shows subsidies in these countries was at least $151bn in 2016. Reductions of fossil fuel subsidies in more developed OECD countries have stalled over the past few years, the inventory shows, with most reform instead occurring in developing nations, such as Indonesia and India.

The OECD inventory also shows UK support for fossil fuels was at least $6.5bn in 2016. The UK has been one of only a few OECD countries to introduce new measures benefitting production of fossil fuels in recent years, the report says.

Carbon Brief digs into the global figures for fossil fuel subsidies and looks, in particular, at where the support for fossil fuels in the UK is going.

The new report combines the OECD’s policy-by-policy dataset with the IEA’s estimates for global consumer subsidies to calculate, for the first time, a global figure for fossil fuel support.

It finds that support ranged from $373bn to $617bn per year over 2010-2015, the period during which data coverage is the best for most countries in both databases, as shown in the chart below. Across all years, support for petroleum and natural gas dwarfs coal support. As the chart shows, fossil fuel support in 2015 was the lowest since at least 2010. 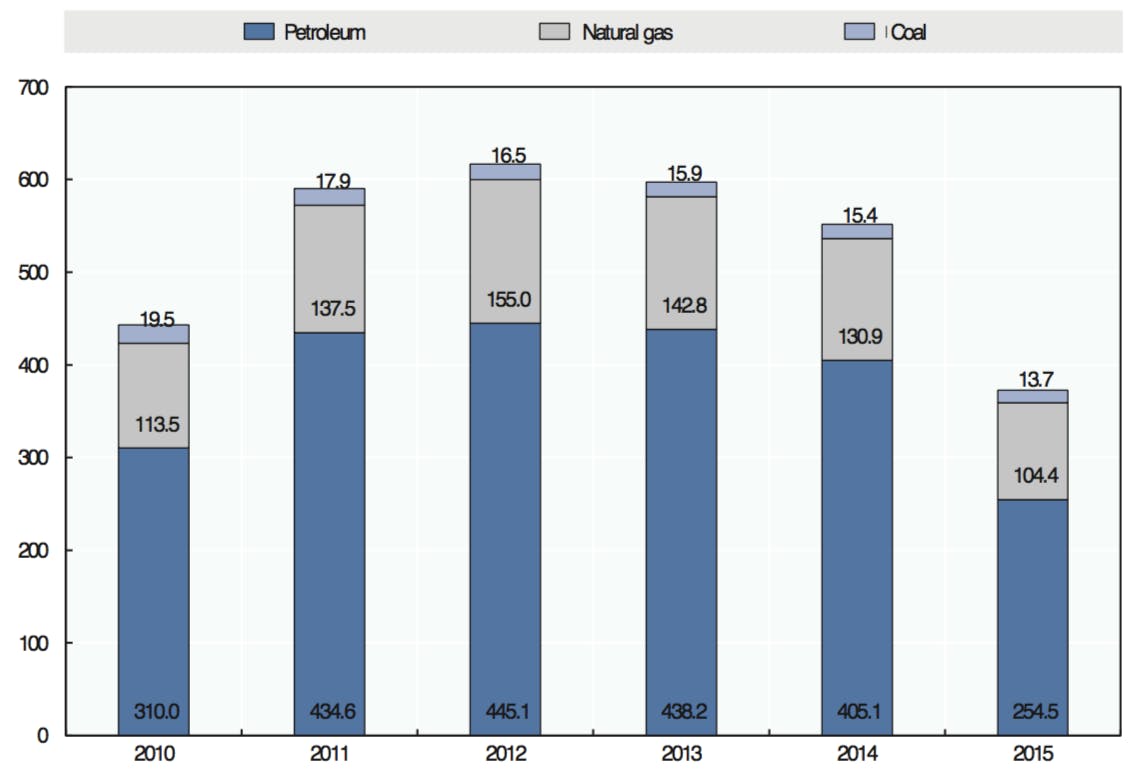 IEA-OECD joint estimate of support for fossil fuels in $bn from 2010 to 2015, based on a “rule-of-thumb” approach to combine the IEA estimates of consumer price support with OECD Inventory estimates. Source: OECD Companion to the Inventory of Support Measures for Fossil Fuels 2018.

However, the merging of the OECD and IEA currently only covers subsidies to coal, natural gas and oil products but not to electricity produced with fossil fuels. The IEA has estimated this accounted for around $100bn in 2015, Martin Michelini, a statistician on fossil fuel support at the OECD, tells Carbon Brief. Therefore, fossil fuel support in the 76 countries covered is, in reality, likely to be closer to $500bn in 2015.

The map below shows the 76 countries covered by the combined OECD and IEA datasets. The new report estimates these countries together account for 94 per cent of global CO2 emissions. It adjusts its total estimate to account for overlap in the eight countries (shown in dark blue in the map below) which appear in both datasets.

Fossil fuel support country coverage by the IEA and the OECD. This chart illustrates coverage by the IEA in grey, by the OECD in light blue, and represents the overlapping countries in dark blue. Source: OECD Companion to the Inventory of Support Measures for Fossil Fuels 2018.

The removal of fossil fuel support has increasingly been seen as an important contributor to reducing greenhouse gas emissions. Both the G7 and the G20 have pledged to eliminate “inefficient fossil fuel subsidies”.

In the report, the OECD says phasing out fossil fuel support is beneficial both through addressing climate policy objectives and raising public revenues.

In a foreword to the report, the OECD explains how the move to combine the two datasets could help governments to tackle fossil fuel support. It says:

“While several international organisations and NGOs develop their own data repositories of support measures for fossil fuels, the need for greater coordination is necessary in order to deliver a strong message to policy makers.”

“[F]urther coordination is needed and can be improved, especially as inconsistencies in definitions and data are sometimes used as an excuse to postpone action. Greater coordination efforts could also help move towards a consensus on key concepts, such as the conditions under which support to fossil fuel is not considered as “inefficient”.”

Ivetta Gerasimchuk, a researcher from the International Institute for Sustainable Development (IISD), an NGO which tracks producer subsidies, tells Carbon Brief that the new figures are the OECD’s attempt to begin to reconcile the many different estimates for fossil fuel support. She says this could make it easier for governments to quote a single number or compare their subsidies to those of other countries. She tells Carbon Brief:

“It is difficult sometimes for people who are interested in this topic to understand what’s really the scale of subsidies and why authoritative international organisation such as IMF or OECD or IEA all have different numbers. Of course that can be basically used also against the case for reform; if people don’t agree on the number then it’s kind of easy for the industry or some other fossil fuel interests to argue against the whole thing.”

It is worth noting that there are still some measures of support to fossil fuels, such as credit support – whereby governments offer support to investment in the production of fossil fuels and, thus, increase access to credit or lower the cost of borrowing – not included in the OECD’s totals. The new report does propose a method to estimate the support element of two types of credit support for fossil fuels offered by governments: loan guarantees and concessional loans. However, it does not include any values for these in its estimates.

As the report says:

“Government credit assistance can confer substantial benefits to carbon-intensive infrastructure, thus hampering the transition towards a low-carbon world, while inducing revenue losses for governments. Quantifying the support element of such measures therefore enhances transparency on the use of public resources.”

The report also does not include any estimates for the cost of externalities – such as climate change – resulting from the use of fossil fuels, as the International Monetary Fund (IMF) has previously

included in its work when calculating global fossil fuel subsidies.

In addition, as the OECD is an intergovernmental organisation with its database coordinated by country representatives, there may be cases where a certain policy has been removed from the database at the request of a country.

“We are not yet there where we have the final knowledge of what is the scale of global energy fossil fuel subsidies. It will take much more work to build this transparency, to reconcile methodologies. But it’s a big step in the right direction, so it is certainly welcome.”

The new OECD report also presents a more recent figure for the support measures given to fossil fuels in 2016, which it calculates at $151bn. This comes only from the OECD database which covers the 35 developed OECD countries and eight partner economies (see map above). It does not include any IEA data and is not comparable to the figures given in the previous section.

The report documents more than 1,000 policies which confer a benefit to the use or production of fossil fuels in these countries. Importantly, most of these were introduced decades ago in the form of tax expenditures. The report says:

The chart below shows how these support measures have changed for the OECD nations (left in the chart) and eight partner economies (right in the chart) since 2006. 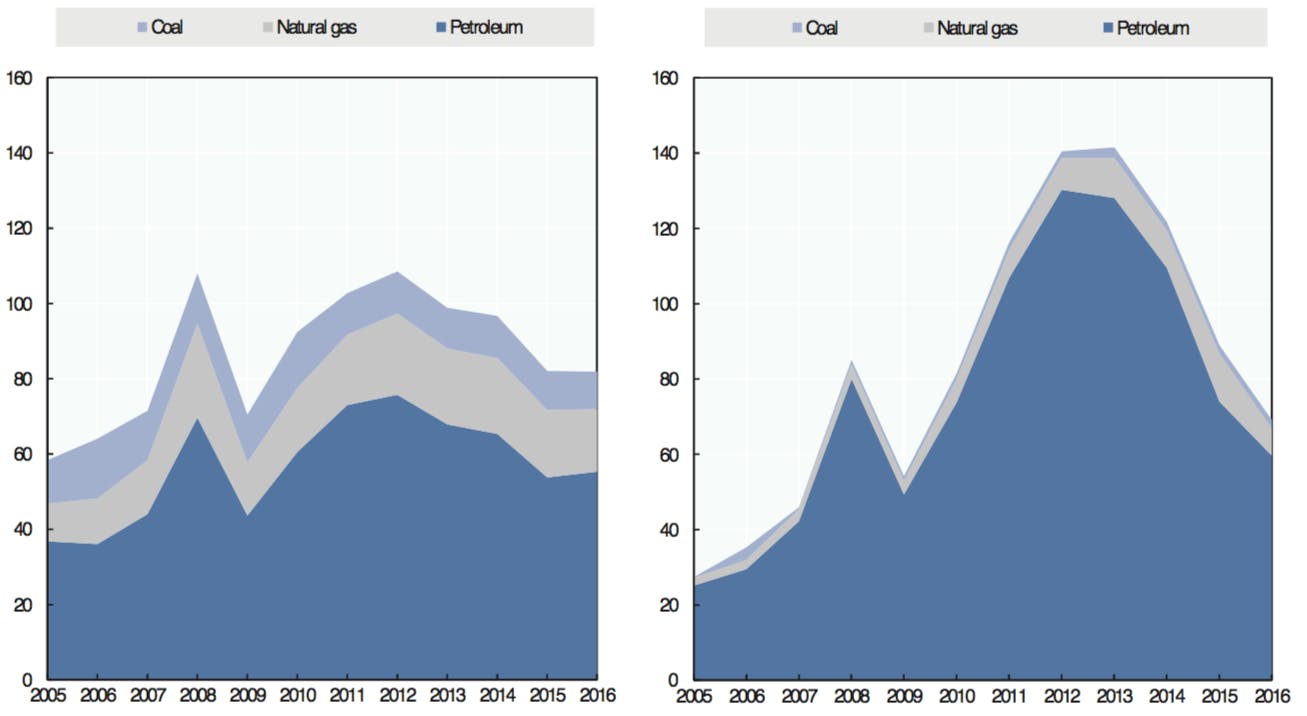 As the chart shows, despite a decline since 2011, progress in phasing out this support in OECD nations has stalled in the past two years. Support documented by the OECD stood at $82bn in 2016 for these countries.

According to Gerasimchuk, most of the reduction seen in 2014 was because of reform in Mexico. Meanwhile, the core developed countries within the OECD “haven’t done much”, she says. There is not enough reform on fossil fuel support, both because it is difficult and politically very tricky, she says:

More progress has been seen in the partner economies, where year-on-year declines have been seen since 2013. Support documented by the OECD stood at $69bn in 2016 for these countries, down from $142bn in 2013. Noteworthy, in particular, is policy reform in Indonesia which has led support for fossil fuels to fall to $2.4bn in 2017, almost a tenth of the $20.2bn in 2014.

This is similar to the definition used by the IEA. The definition largely applies to subsidies typically found in developing countries (although some argue that even under this definition the UK has subsidies due to its reduced VAT rate on gas and electricity).

Definitions of “fossil fuel subsidy” aside, the OECD inventory documents a significant level of support for fossil fuels in the UK. Carbon Brief has extracted this data, shown in the chart below, from the OECD database. 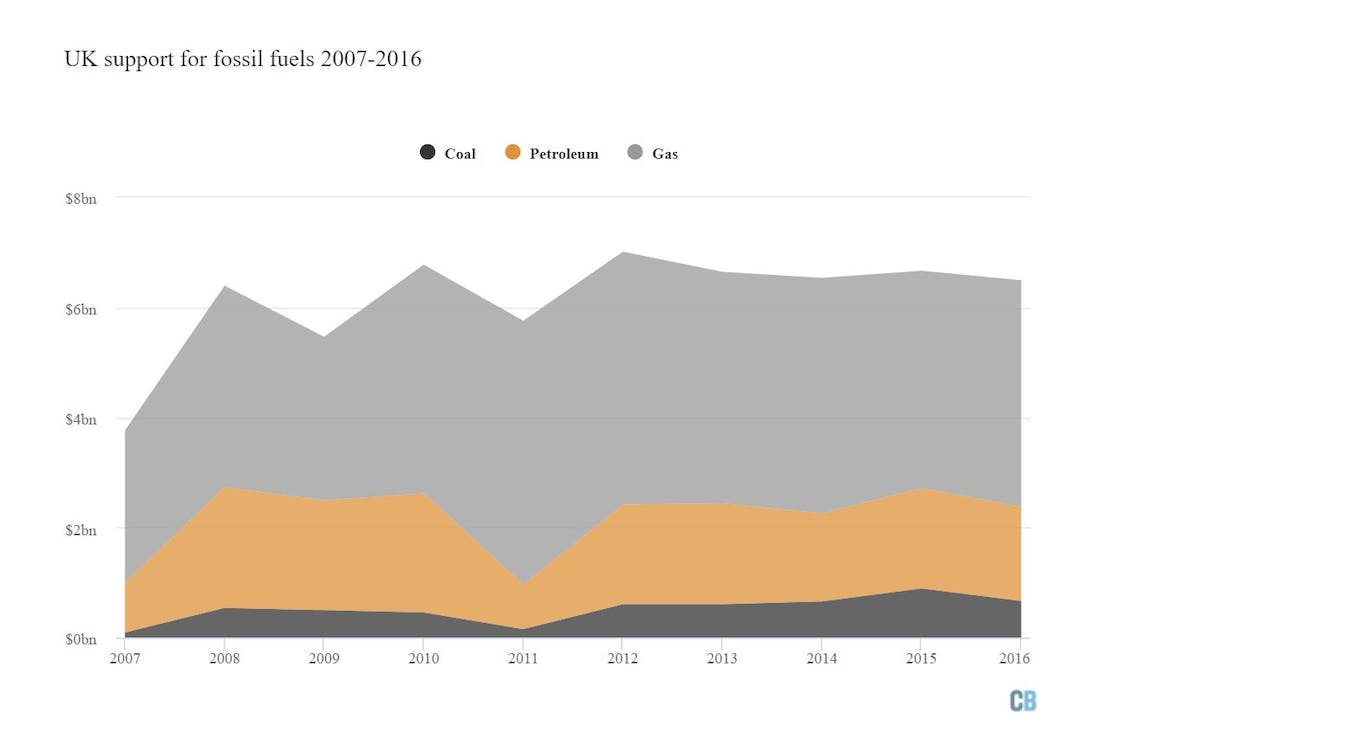 As the chart shows, support for fossil fuels in the UK documented by the OECD has remained at between $5.8bn and $7bn since 2010. While support goes mainly to gas production, over a third in 2016 went to prop up coal and petroleum.

It is important to note, however, that the OECD inventory—and, thus, this graph—is not exhaustive. Therefore, is not likely to include all measures of fossil fuel support in the UK. Indeed, the inventory even identifies some support to fossil fuels in the UK which are not quantified and, thus, not included in these values.

In fact, a report released last year by the Overseas Development Institute (ODI) documented the UK’s fossil fuel subsidies being, on average, £14.6bn per year between 2014 and 2016, including budget expenditure, tax exemptions, price relief and public finance. The report said the UK’s transparency on reporting fossil fuel subsidies remains relatively poor compared to other European countries, meaning even these figures are likely to be an underestimate.

The new report also shows the UK was one of only a few countries, alongside South Korea, Russia and Argentina, to introduce new measures of support for fossil fuels during 2015 and 2016. It says:

Source: OECD Companion to the Inventory of Support Measures for Fossil Fuels 2018.

The G20’s pledge to phase out “inefficient” fossil fuel subsidies over the “medium term” failed to define what kind of support should and should not be included in this phase out. The G7 has a similarly vague pledge, albeit with a 2025 deadline.

One solution to overcome the failure to agree on a common definition has been a G20 call last year for its members to undertake voluntary peer reviews of the reform of inefficient fossil fuel subsidies.

Among other things, the OECD’s bottom-up inventory of fossil fuel support provides a base to help governments undertaking such reviews of their fossil fuel supports to identify where specifically they may be able to remove them. The report says: