Southeast Asia is the only region in the world where coal's share of the energy mix is growing. Eco-Business asked David Turk of the International Energy Agency what the region can do to curb emissions while providing reliable electricity to a large and growing population.

Southeast Asia is where the fight against climate change could be won or lost.

The bloc of 641 million people from Myanmar to Papua is home to some of the world’s fastest growing economies. Energy demand has grown by 80 per cent since 2000 and, over the next 20 years, is projected to grow by two-thirds again, as people leave the countryside for the city, swapping kampongs for condos, bicycles for cars, and wet markets for airconditioned shopping malls.

Powering Southeast Asia’s growth story is the single biggest contributor to man-made greenhouse gas emissions—coal. Nowhere else in the world has coal increased its share of the energy mix over the last year, and the International Energy Agency (IEA) predicts that Southeast Asia’s coal use will more than double by 2040, when it will account for 40 per cent of the energy mix.

As a result, carbon emissions from Southeast Asia’s appetite for energy are expected to rocket by three quarters—five times as fast as the global average—by 2040, when the region’s contribution to global emissions will have jumped from 4.1 per cent to 6.5 per cent.

Meanwhile, Southeast Asia’s transition to clean energy sources is the slowest in the world. Even Africa, the world’s poorest continent, is moving faster to adopt renewables. Finland, which extends into the Arctic region, has more solar panel installations than sprawling, sun-drenched Indonesia.

Without Southeast Asia’s participation, there is even less chance of the world meeting the Intergovernmental Panel on Climate Change’s 12-year deadline to dramatically cut emissions to prevent the worst effects of climate change, which will hurt the low-lying, archipelagic region more than anywhere else on the planet.

But how to move the energy transition needle in a region where 60 million people still live without access to electricity, where coal is cheap and abundant, and political leaders feel entitled to follow the fossil-fueled development paths of the rich countries that were once their colonial rulers? 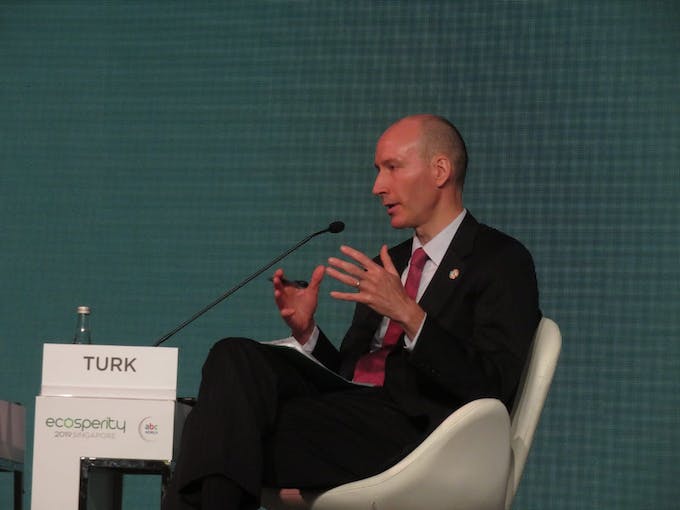 David Turk is the Head of the Strategic Initiatives Office at the International Energy Agency, a Paris-based international energy organisation set up by industralised nations in the wake of the 1973 oil crisis. The American, who previously worked for the United States Department of Energy, tells Eco-Business that while his organisation gives advice on energy policy, “we don’t tell countries what to do.”

“Through our data analysis, we say: If you take this path or that path, here are the consequences,” he said in an interview at the Ecosperity conference in Singapore earlier this month.

IEA has long been criticised for underestimating the role of renewables in the future of energy systems. But a new report which draws upon analyses and data from the IEA, titled Southeast Asia’s Energy Transition: Powering towards the SDGs and produced for Ecosperity 2019 by Temasek, claims that the region will need to invest US$850 billion in renewables by 2040 to meet sustainability goals in line with the Paris Agreement.

The paper suggests that a transition to renewables as the dominant energy source by 2040 could save Southeast Asia US$150 billion in energy imports, halve emissions and prevent 70 per cent of the 400,000 premature pollution-related deaths caused by burning coal and other fossil fuels.

Whether or not the region’s policymakers take heed is another matter. “We see that many decision-makers [in Southeast Asia] have a lagging perception of what is possible with different technologies,” says Turk diplomatically.

A big challenge is convincing energy ministers—among the most risk averse of government officials—of the reliability of renewables such as solar, which stop generating energy when the sun goes down.

“No energy minister wants the lights to go out on his or her watch. We work with them to work out how to build intermittent renewables into their grids, and the solutions they need to create flexibility in the system and avoid black outs.”

The further prices of renewables drop—solar and offshore wind prices have fallen by 84 per cent and 51 per cent, respectively, since 2010—the more comfortable energy ministers are with bringing intermittent power sources on board, says Turk.

As the severity and frequency of climate impacts grow, so the pressure will build on government leaders to step up and do what is necessary to make the energy transition.

That comfort level will increase the more energy ministries learn from the experiences of their neighbours, for instance, deploying renewable energy microgrids that are better suited to the dispersed island geographies of countries such as Indonesia and the Philippines.

Turk even suggests that for renewables to reach a “tipping point” in Southeast Asia, the region needs to think seriously about the potential of cross-border energy solutions as seen in Scandinavia, where Denmark and Sweden manage intermittency issues by plugging into Norway’s hydropower capability.

But in the Southeast Asian context, sharing energy is not without obstacles, Turk admits. “These are countries with different issues, tensions and historical legacies,” he says.

Besides massive investment in renewable energy, major improvements will need to be made to Southeast Asia’s creaky energy infrastructure, which by global standards is highly inefficient, Temasek’s report finds.

The region will also need to reduce fossil fuels subsidies, which in 2017 had been reduced by about half, to US$20 billion, with far deeper reductions needed to give renewables an opportunity to proliferate.

The IEA even recommends developing carbon capture technology—which Turk admitted has not yet been proven to work at scale—to reduce emissions from the region’s existing coal fleet.

Can Southeast Asia rise to the massive challenge ahead? Turk is optimistic. “Things seem impossible until they happen. Then it seems like change was inevitable,” he says, adding that those most severely impacted by the consequences of rising carbon emissions are those most likely to drive change.

“People who live off the land are already seeing the most visceral impacts of climate change. Southeast Asia is no stranger to extreme weather, but as the severity and frequency of climate impacts grow, so the pressure will build on government leaders to step up and do what is necessary to make the energy transition,” he says.

The question is, will Southeast Asian governments take the necessary action in time? “The more you get into the problem [of climate change], the more costly it will be to make the transition,” warns Turk.