Vietnam is rising as Southeast Asia’s new wind hero, with power capacity soon to dwarf that of all other Asean nations and the world’s biggest offshore wind farm to be built off its windy coast, but challenges remain.

Vietnam’s thriving wind energy market is, without doubt, among this year’s biggest success stories for renewables to emerge from Southeast Asia, a region that has long resisted the global trend away from fossil fuels.

With its economy ballooning and its population among the world’s most climate-vulnerable, the country has made great strides to boost wind power to keep pace with soaring energy needs and bring down carbon emissions, introducing more ambitious wind power targets than any other Southeast Asian state and policies that have attracted investors from all over the world.

With foreign capital flows into Vietnam on the rise, the country is forecast to install 1 GW of onshore and offshore wind capacity by 2021, up from the current 327MW, surpassing even Thailand—at present Southeast Asia’s front-runner in installed wind capacity. Vietnam is also the only state in the Association of Southeast Asian Nations (Asean) to have developed offshore wind, with 99 MW already in place.

But it won’t stop there, with the target to deploy a total wind power capacity of 6,000 MW by 2030 enshrined in its latest national power development master plan.

The government has realised that wind power is a cheap and reliable source of electricity production. Given the soaring electricity demand, this is the most sensible direction to go in.

In July, the Vietnamese government approved the assessment of the area off the cape of Kê Gà in south Vietnam to build the world’s largest offshore wind farm with a capacity of 3,400 MW. Once completed, the project’s power capacity will outstrip even that of the nation’s largest coal, gas and hydropower stations.

Liming Qiao, Asia director at Global Wind Energy Council (GWEC), said with Vietnam’s energy needs acute, the state turned its focus to its 3,300 km coastline, which boasts one of the best resources for both onshore and offshore wind in Asean. By tapping into its potential offshore wind capacity alone—an estimated 309 GW—Vietnam could meet its entire energy needs for decades to come.

“The government has realised that wind power is a cheap and reliable source of electricity production. Given the soaring electricity demand, this is the most sensible direction to go in,” she said.

Vietnam ranks among the world’s fastest-growing economies. Industrialisation and a burgeoning population of 96.7 million have pushed up power demand at an annual average rate of about 10.5 per cent between 2016 and 2020, and projections indicate similar growth patterns until 2030, raising concerns over energy security, particularly in industrialised and densely populated areas.

Olivier Duguet, founder and chief executive officer of Singapore-based clean energy developer The Blue Circle, said: “Vietnam is facing a power generation shortage in the south where most of the demand and growth is. Conventional power is facing opposition, including demonstrations against coal-fired power station projects, and will not be fast enough to avoid the blackouts coming in the next 2-3 years. Renewable power, especially wind, on the other hand, is abundant in the south, cheap and fast to deploy.”

In addition to easing concerns over energy security, wind power could shield the country from price fluctuations of imported coal. 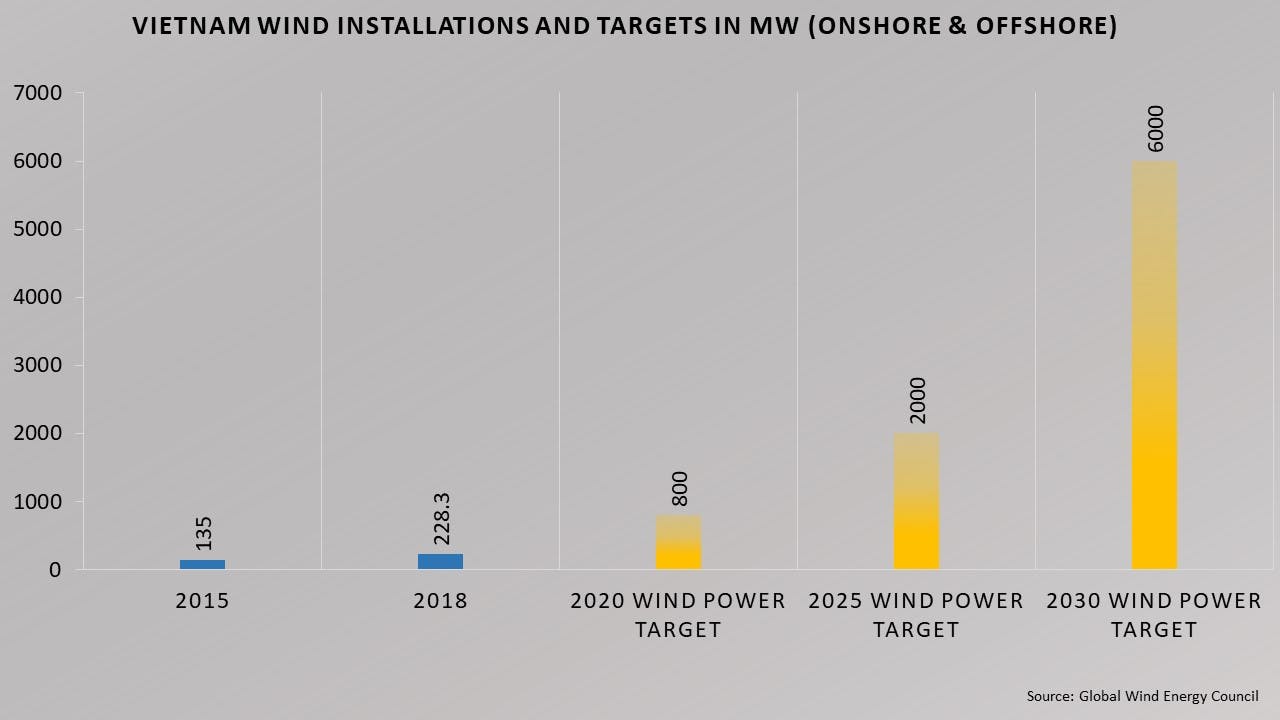 In October this year, hazardous air pollution levels hit Hanoi, placing the haze-stricken capital in northern Vietnam, where most of the country’s coal-burning power stations are concentrated, on top of the list of the world’s most polluted cities.

With local banks lacking sufficient liquidity to finance wind turbines on their own, the Vietnamese government has introduced various support mechanisms to attract international investors and balance out the high risks associated with emerging markets. It has, for instance, exempted developers from different taxes, facilitated public-private partnerships and raised feed-in-tariffs.

The latest feed-in-tariff for onshore projects, introduced last year, stands at 8.5 US cents/kWh, while offshore wind power generators will be paid 9.8 US cents for every kWh of power exported to the grid.

With the feed-in-tariff to expire in 2021, the next two years will be an exciting period for wind power in Vietnam as developers rush to install projects before the scheme ends.

But rich resources aside, Vietnam’s wind market is still in the early stages and multiple challenges remain.

Posing the biggest obstacle is the lack of financing for projects, with persisting risk factors deterring international developers and lenders.

This includes the fact that if Vietnam Electricity (EVN)—Vietnam’s main electricity company which buys all power from power producers—defaults on its payment, the government will not step in, rendering EVN less creditworthy and power purchase agreements—contracts between the firm that generates electricity and the off-taker purchasing it—unbankable from many investors’ point of view.

“For large offshore wind projects where significant investment is involved, some type of government guarantee would be normally expected, but it is still unavailable at this stage,” said VILAF’s Ha. 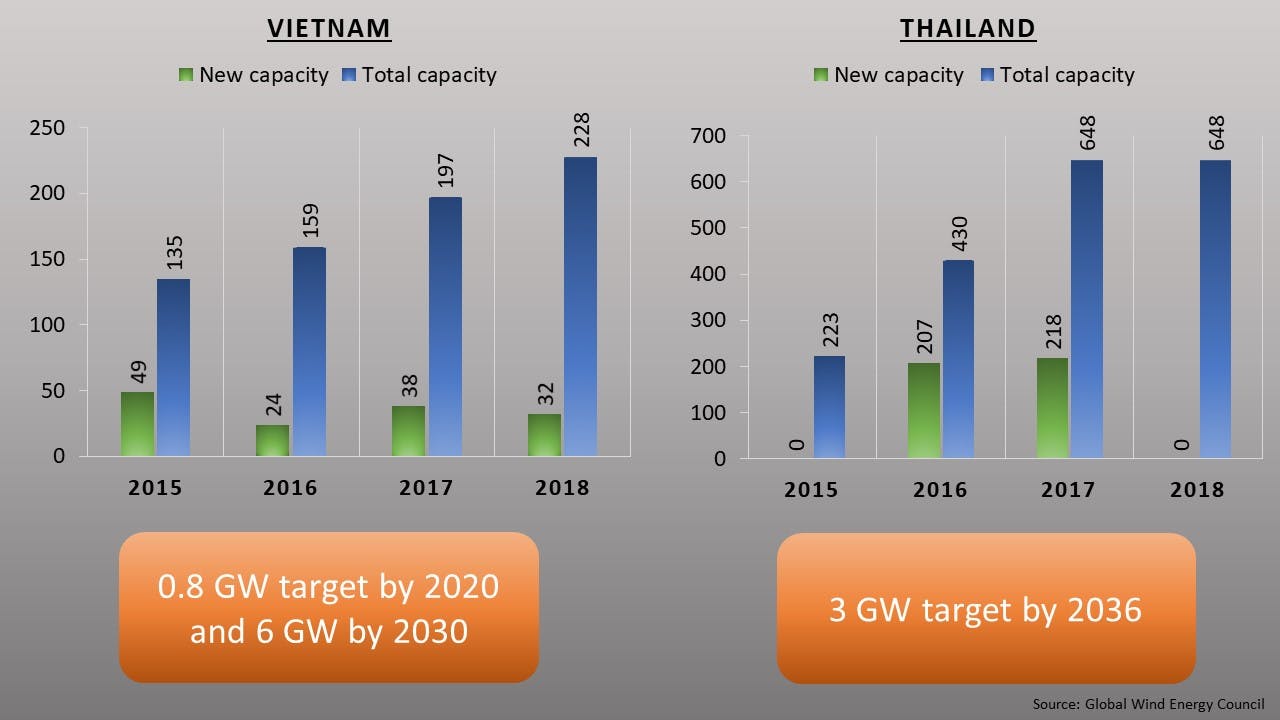 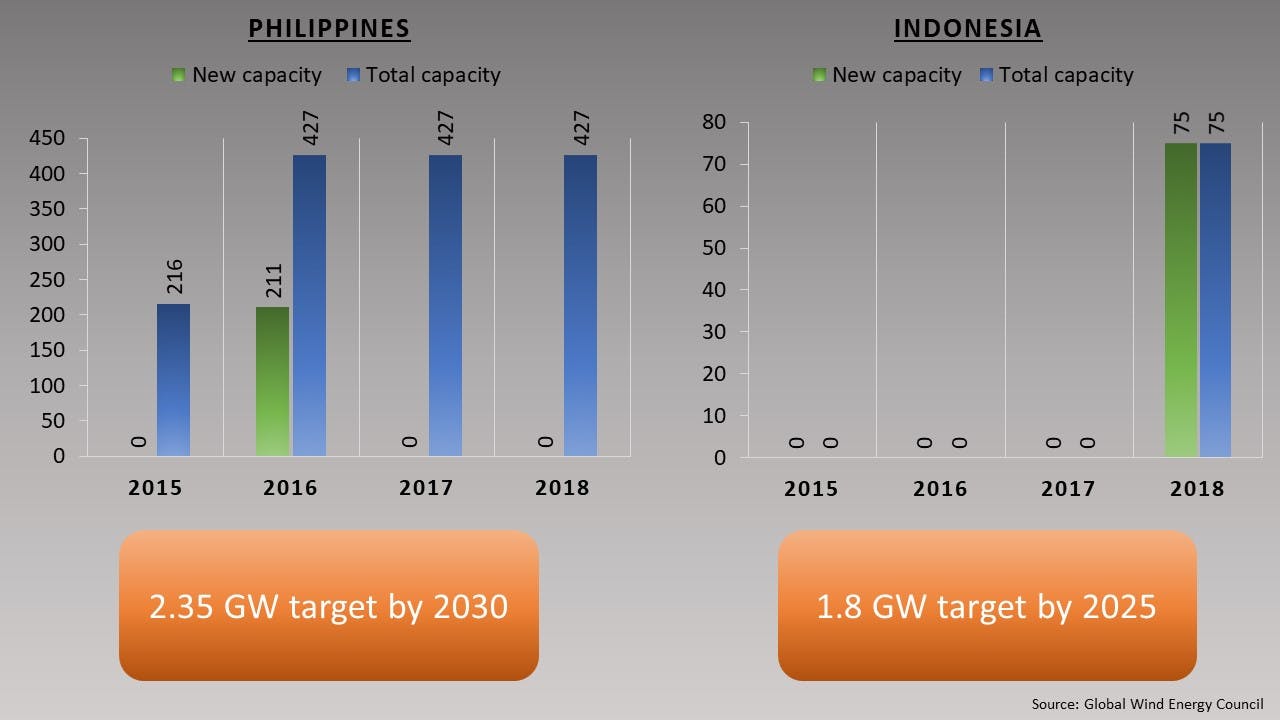 As wind power takes Vietnam by storm, developers further struggle with the country’s underdeveloped power grid capacity, with the wildly fluctuating power production of wind turbines springing up along the country’s coast placing increasing stress on the nation’s utilities.

Strengthening the national electricity grid is vital for the country to accelerate renewables deployment, according to Vietnam’s minister of industry and trade, Tran Tuan Anh, who recently conceded he had not anticipated the explosive growth in renewables capacity and had failed to develop adequate power transmission systems to prepare for the transition.

“This is why the government and EVN have drawn up an ambitious plan for investing and developing the transmission infrastructure and EVN is mandated to make sure transmission capacity is put in use in an urgent manner. Actual preparation works and construction works have started,” he added.

Grid capacity is an ongoing issue for renewables as governments try to integrate them into a power system that was designed for constant, centralised electricity production, not for the variability of solar and wind power, said Qiao of GWEC.

She said for power production to go green, a system change is needed. Among other things, this means energy grids must become more flexible by harnessing constant renewables like hydroelectricity, utility-scale storage such as pumped hydro or small-scale batteries to ensure a steady and reliable power supply even when the wind isn’t blowing and the sun isn’t shining.

“But this requires investment, and for that Vietnam needs more investors. Multilateral banks in particular must play a bigger role,” Qiao said.

Developers are also grappling with a lack of qualified workers and underdeveloped supporting industries, calling for better capacity building.

And despite the current positive outlook, the future of wind power in the country remains unclear, with the current feed-in-tariff set for all projects entering operation by November 2021. The government has so far not revealed what will come after the scheme expires. This affects projects such as the wind farm off the cape of Kê Gà, which will not be finalised before 2027.

Experts have proposed various steps the government could take to speed up wind power growth in the country, such as gradually raising feed-in-tariffs and addressing bankability issues.

Making developers jump through fewer bureaucratic hoops to get their projects approved could also help bring down costs and encourage more firms to do business in the country. The negotiation of power purchasing agreements with EVN in particular is time-consuming, which has often delayed approvals or even resulted in the complete abandonment of ventures.

Ha said the government had already improved the purchase power agreements for wind energy, better regulating the termination payment clause, which determines the compensation paid to developers in the event EVN terminates the agreement.

Wind power is not the only clean energy source thriving in the state, as Vietnam is also moving to ramp up its solar capacity, with targets in place to deploy 12,000 MW by 2030.

Southeast Asia is the world’s most vulnerable region to climate change, making it imperative for Asean countries like Vietnam to decouple power production from emissions.

Vietnam, however, still heavily relies on electricity from coal—the biggest driver of man-made global warming and one the state continues to subsidise, making it harder for clean energy to compete with dirty fossil fuels on cost—and while projections for the coming years indicate this will gradually change, the national power development master plan envisages that coal will supply more than half of Vietnam’s energy by 2030.

This is bad news for the country’s coastal communities, which are at risk of being swallowed by rising seas, and for its labour-intensive agricultural sector, which could see yields decline dramatically as the region experiences more frequent and intense climate change-induced droughts and the Himalayan glaciers supplying water for irrigation recede.