Abandoned gear is a huge threat to the environment but there are lots of ways to fix the problem.

Fishing gear that’s lost or dumped in the ocean may account for almost one half of all the plastic waste that ends up there. But this equipment, which is manufactured for fishing or aquaculture, isn’t ordinary waste because it continues to do what it was designed for—trapping marine life, with devastating consequences.

Global awareness of the issue is growing though. In Shenzhen, Karachi and the Mediterranean, for example, diving organisations are removing nets from the marine environment, while numerous companies and organisations have sprung up to find ways of reusing the waste. 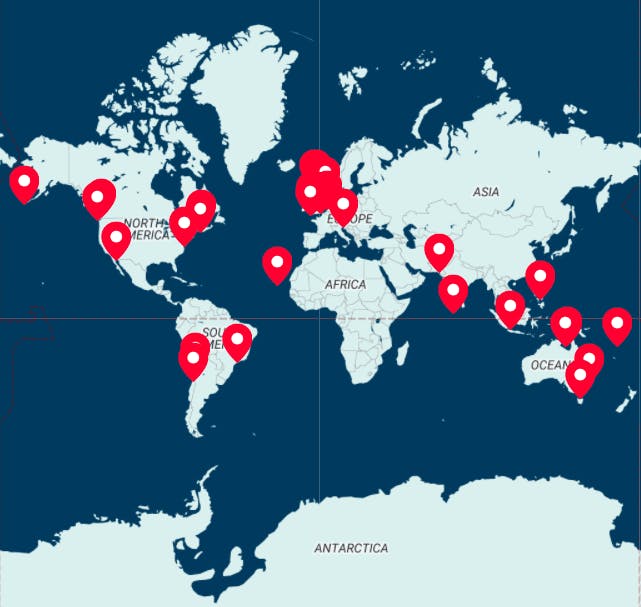 Dozens of organisations around the world are removing abandoned nets from the seabed, recycling old nets, or using them to generate power (Source: Global Ghost Gear Initiative)

Before getting to the alternative uses for old fishing gear, it’s worth remembering that relying on volunteers to recycle ghost nets will never fix the problem. Fishermen must also get involved to increase recycling of marine plastics. In Scotland, one organisation is doing this, bringing waste collected at sea back to land.

But most important is stopping fishing gear from being lost to the ocean at all. Alongside tracking fishing gear and offering financial incentives for recycling, the development and use of alternatives needs to be accelerated. Most important is making fishermen aware that if non-biodegradable fishing gear continues to be dumped at sea, nobody will win the battle against ghost nets.

Since helping to rescue a sperm whale trapped in abandoned fishing nets in 2017, the volunteers with Shenzhen diving organisation Diveforlove have been removing marine litter, and fishing nets in particular, from the seabed of nearby Dapeng Bay.

They consulted with the fishermen living locally to learn how fishing nets are made, and now recycle the old nets into bags, which they use to store rubbish collected when diving. This also made the fishermen aware of how their abandoned nets were causing problems.

But the nets tend to be coarse and knotted and cannot be used to make more valuable consumer goods. Diveforlove is trying to make similar bags out of finer nets used in aquaculture, but these need to be scavenged at the recycling centre and then cleaned, which makes the process more expensive and harder to commercialise.

In their search for a sustainable way of reusing fishing nets, Diveforlove head Xia Jiaxiang and the team visited plastics recyclers, learning that most recycled plastic nets are turned into plastic pellets before being reused. This provided some inspiration and they are now looking for ways to ensure the plastic is used in environmentally friendly products. 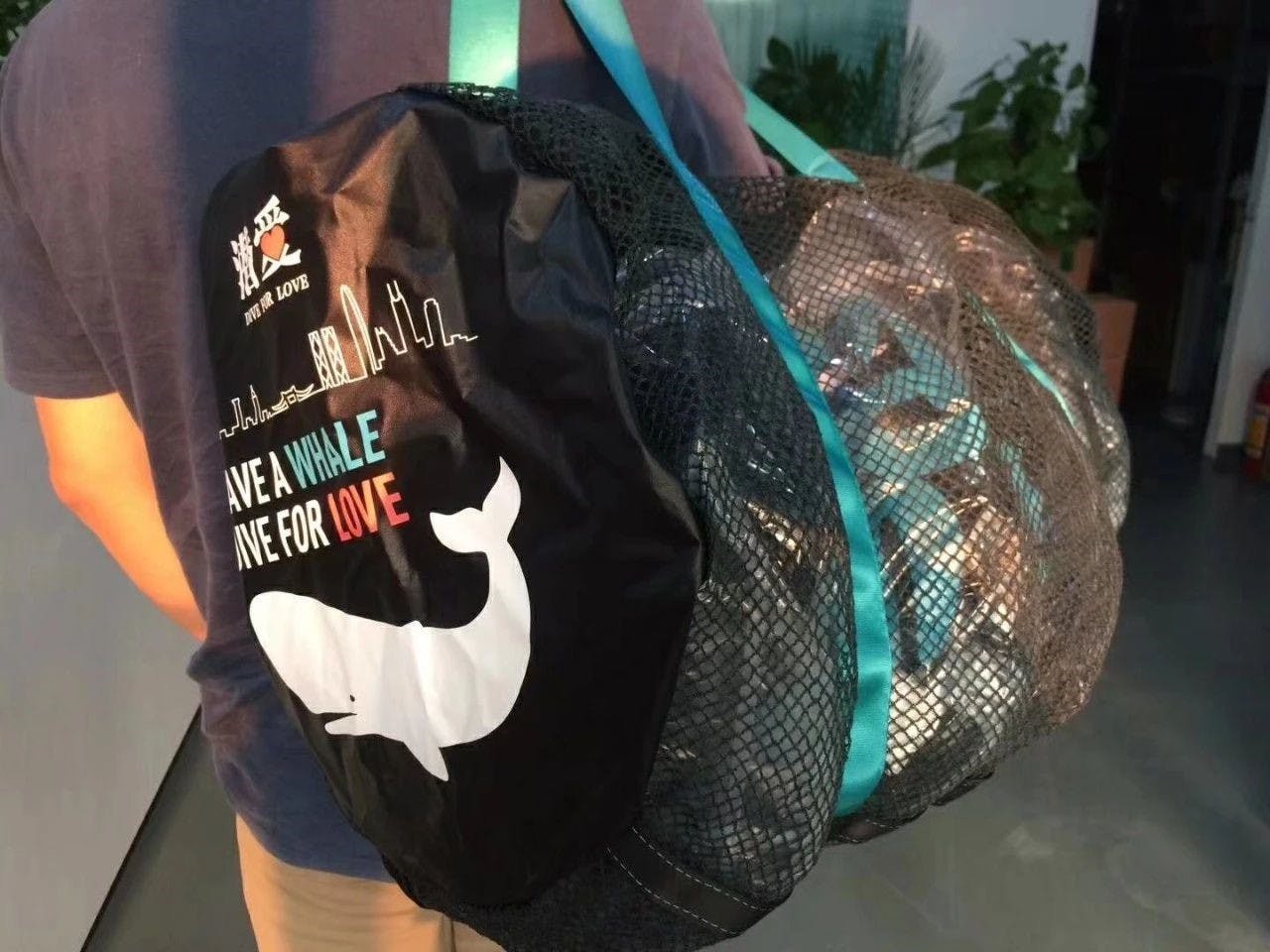 Diveforlove have been recycling old nets into bags.

A lot of recycled fishing gear can be melted down into plastic pellets that can be used to make new consumer products. Bureo, a California-registered company, is currently working on such a project.

Bureo was founded by three young surfers deeply concerned about marine litter and was initially financed via crowdfunding. Its products are mostly outdoor goods: surfboard, skateboards, sunglasses and toys.

The company does not just make its own products—it also provides its pellets to other companies, which use them in their own goods. For example, a company called HumanScale makes an office chair containing about one kilogram of Bureo’s plastic sourced from fishing nets. Bureo also works with Jenga to make a version of the popular game featuring blocks made entirely out of recycled fishing nets.

The company has recycling stations throughout Chile, where fishermen can deposit waste nets. Currently, 26 fishing communities are involved, and since 2013, 185 tonnes of waste nets have been collected. Bureo is now working with WWF to expand to Peru, where they are working with the fishery authorities to increase the quantity of nets recycled every year to over 1,000 tonnes. 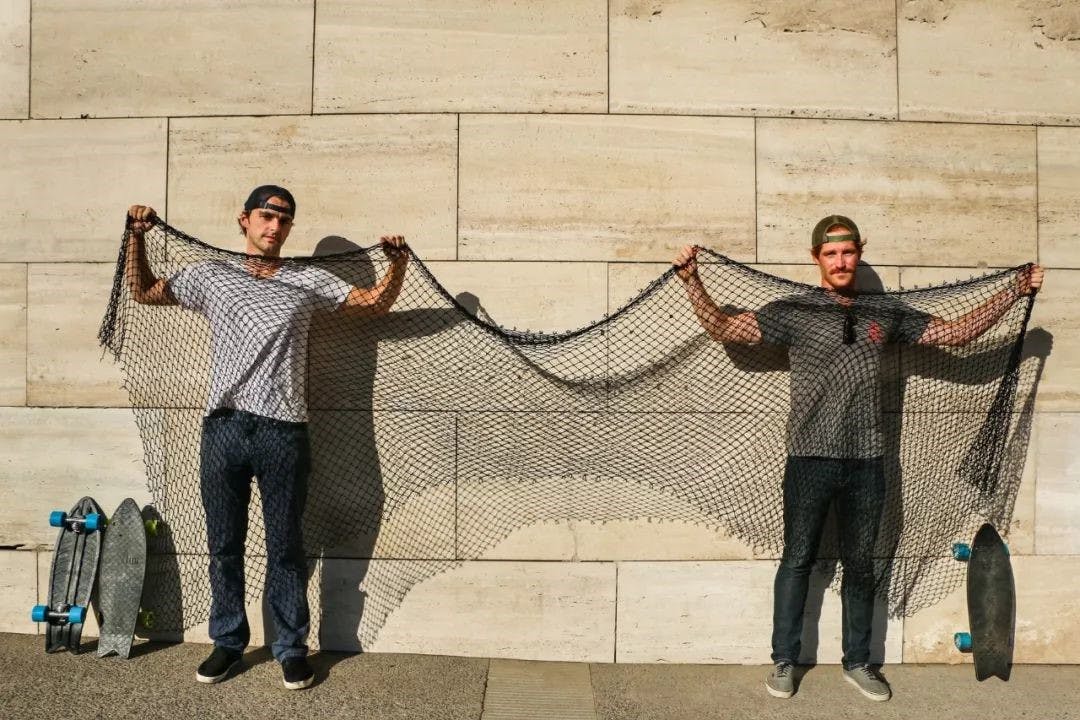 Three square metres of fishing net can be recycled into one skateboard. Image: Bureo

From fishing nets to textiles

Nylon manufacturer Aquail, which has been in business for 50 years, is recycling old fishing nets to make textiles. Piles of old nets often accumulate in fishing ports, and fish farms also use nets with a smaller mesh size to stop young fish escaping. Every month Aquail acquires 400-500 tonnes of nets from the ports, fish farms, and also from seabed clean-up efforts.

After processing, the material is used to make carpets and other textiles. Nets now account for one-quarter of Aquail’s recycled material. 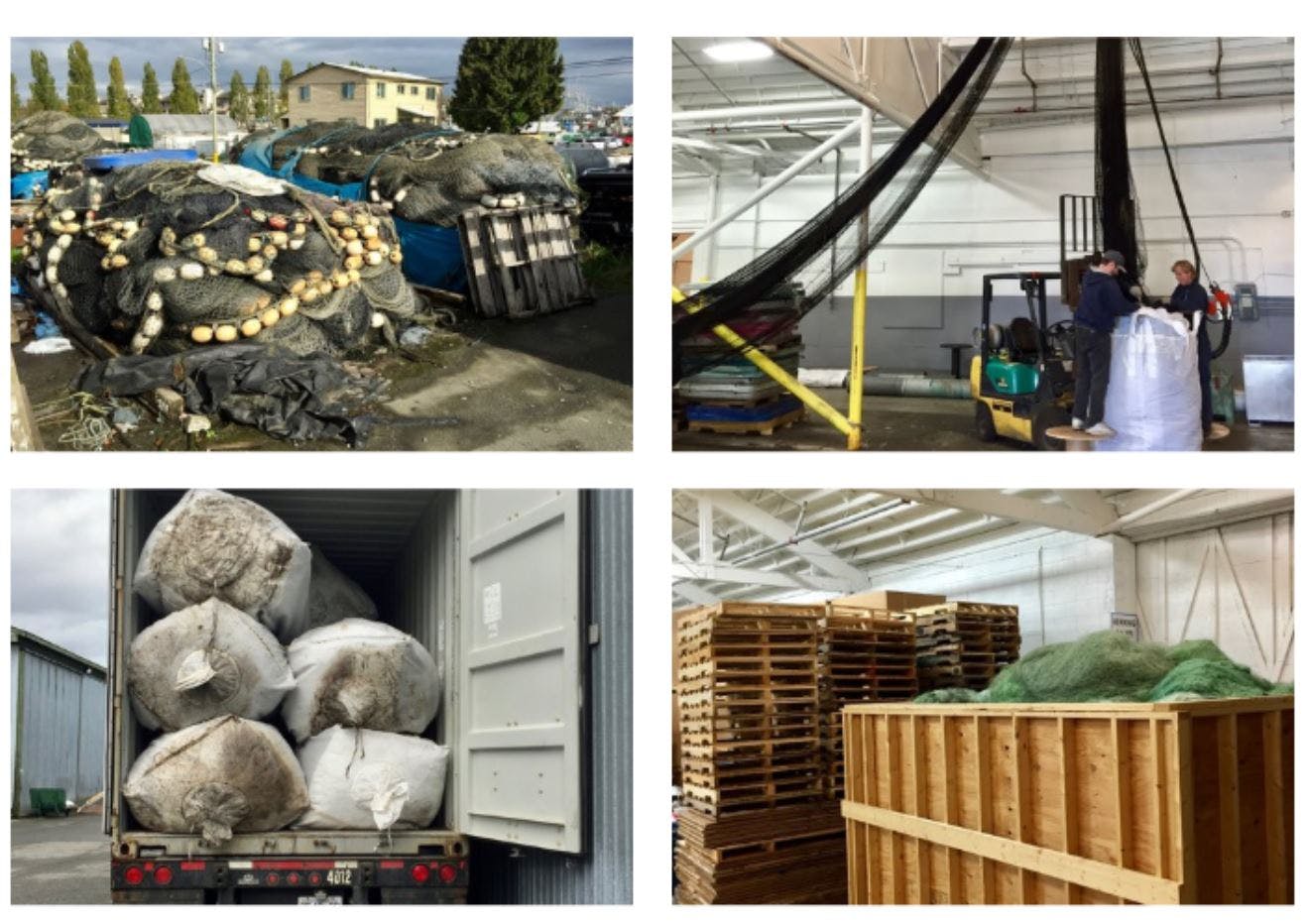 The port of Steveston, British Columbia, one of Aquail’s partners in trials of fishing net recycling Images: GGGI

Foamed plastics are often used in fish farming, but usually only last a year typically. They are easily damaged and break down in storms to become marine litter and microplastics.

In one ocean fish farm in Weihai, Shandong, foamed plastic floats have been replaced with an alternative made of tougher plastic. Each float supports a string of oysters worth 500-600 yuan, and so the improved floats reduce the amount of plastic entering the ocean and also protect the oysters.

Chen Weijiang, chairman of the company, explained that their sustainability certification requires regular patrols to check that no floats have come adrift. Li Haifeng, regional representative for SCS Global Services, a sustainability certification provider, says rubber is added to the floats to provide more elasticity and reduce the chances of breakage. An average fish farm requires 2,000 floats but as the newer alternatives don’t degrade, they could also cause problems if they get loose.