Companies are talking about sustainability more than ever — but are they walking the talk?

Prompted by Covid-19, the word 'sustainability' is cropping up in company filings more than ever — and more so in Asia Pacific than in Europe or North America. Are they walking the talk?

Over the past year or so, there’s been a surge in the frequency and volume of corporate chatter about sustainability, according to a report from analytics firm, GlobalData.

Every other company seems to be using a word that emerged in the 1980s, entered boardrooms in the 1990s, became mainstream in the 2000s, and has grown steadily in popularity until the outbreak of the Covid-19 virus.

According to GlobalData, the number of times the word ‘sustainability’ was mentioned in annual reports, quarterly reports, earnings transcripts and investor presentations reached record levels in 2020, and nowhere was the word as commonly used as in Asia Pacific, where mentions of sustainability were up by 80 per cent compared to 2019.

In the study of more than 20,000 companies across geographies and sectors, Asian firms used the word ‘sustainability’ more than 300,000 times in their corporate filings in 2020.

“Sustainability in a corporate setting has been amplified over the last year or so, probably as a response to the Covid-19 pandemic, and Asia was the first region to experience its impact,” said Oriana Brine, associate director, MullenLowe Sustainability, a sustainability communications agency.

Banks are definitely talking a big game, but for many, talking is as far as it goes.

According to GlobalData’s findings, Asian banks talk the most about sustainability reflecting mounting pressure on financial institutions to divest from industries that significantly contribute to greenhouse gas emissions and to encourage their corporate clients and customers to do the same.

Bank Rakyat Indonesia (BRI), Indonesia’s largest state-owned bank, talked about sustainability more than any other company in Asia Pacific between 2016 and 2020.

Japan’s finance giants have been under international pressure to reduce their carbon lending exposure, with Tokio Marine publishing a climate strategy last year. Indonesia’s banks also face scrutiny for lending to coal and deforestation-risk sectors, and emerged second only to Singapore’s banks in a 2019 WWF study of the sustainability of Southeast Asian banks.

Sustainability-related loquacity has come with a slew of commitments from the corporate world to reduce its environmental and social impact over the last 18 months, such as cutting emissions and going net-zero. This is being driven by rising consumer expections and sustainability-led regulatory and policy changes in certain industries, said Brine.

A coalition of global banks committed themselves to achieving net zero greenhouse gas emissions by 2050 and adopting interim targets much sooner forming the Net Zero Banking Alliance (NZBA) in April. It is designed to use the power of the financial sector to meet international goals to reduce carbon emissions in accordance with the Paris Agreement.

But sectors such as financial services may be raising red flags with so much green talk. “Banks are definitely talking a big game but for many, talking is as far as it goes at the moment, and there are legitimate concerns about whether declaring intentions will have any material impact on outcomes,” said Brine.

She pointed to comments made by Tariq Fancy, the outgoing chief investment officer of sustainable investing at BlackRock, who questioned the credibility of a big trend in banking: sustainable finance. “In many cases it’s cheaper and easier to market yourself as green rather than do the long-tail work of actually improving your sustainability profile,” Fancy said.

A criticism of the banking sector is that the implementation of “green” measures is focused on doing it to sell financial products, Brine added. There is also a question about whether new “sustainable” activities have contributed to the real economy, she said.

“Even where commitments are being made, there is grossly insufficient data, tracking, and incentives to understand how businesses will deliver the changes required to shift the system,” said Brine. “So while a corporate sustainability strategy is now widely accepted as a ‘must-have’, the impact or depth of implementation of many of these strategies is still questionable.”

So far this year, companies in North America, where climate action-minded president Joe Biden came to office in the United States in January, are talking about sustainability more than their European or Asian counterparts, atlhough this could be explained by regional differences in corporate reporting calendars. 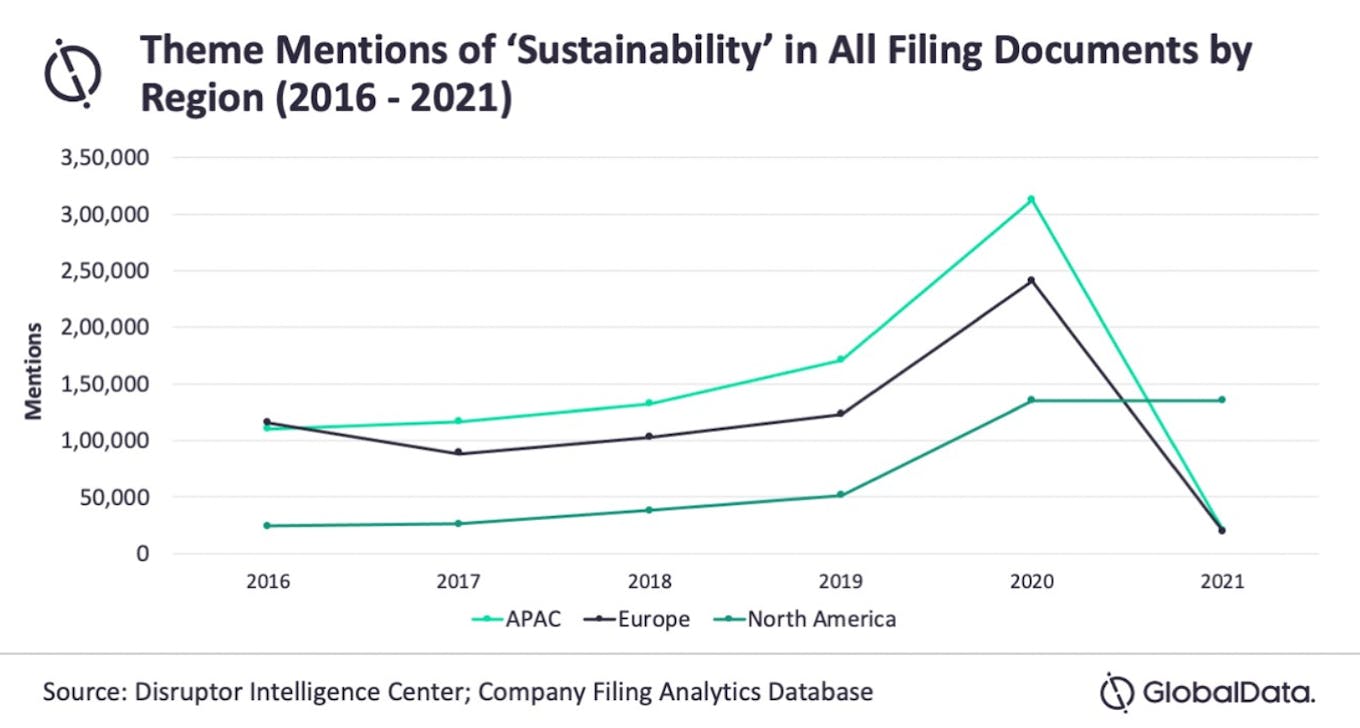 Mentions of the word ‘sustainability’ in company filings, 2016 to May 2021. Source: GlobalData

These sectors are under considerable pressure to reduce their environmental footprint. A study of firms, published on Monday, that report their carbon emissions to CDP, a carbon disclosure nonprofit, finds that the sectors that have made the most progress in decarbonising are utilities, healthcare and consumer goods. 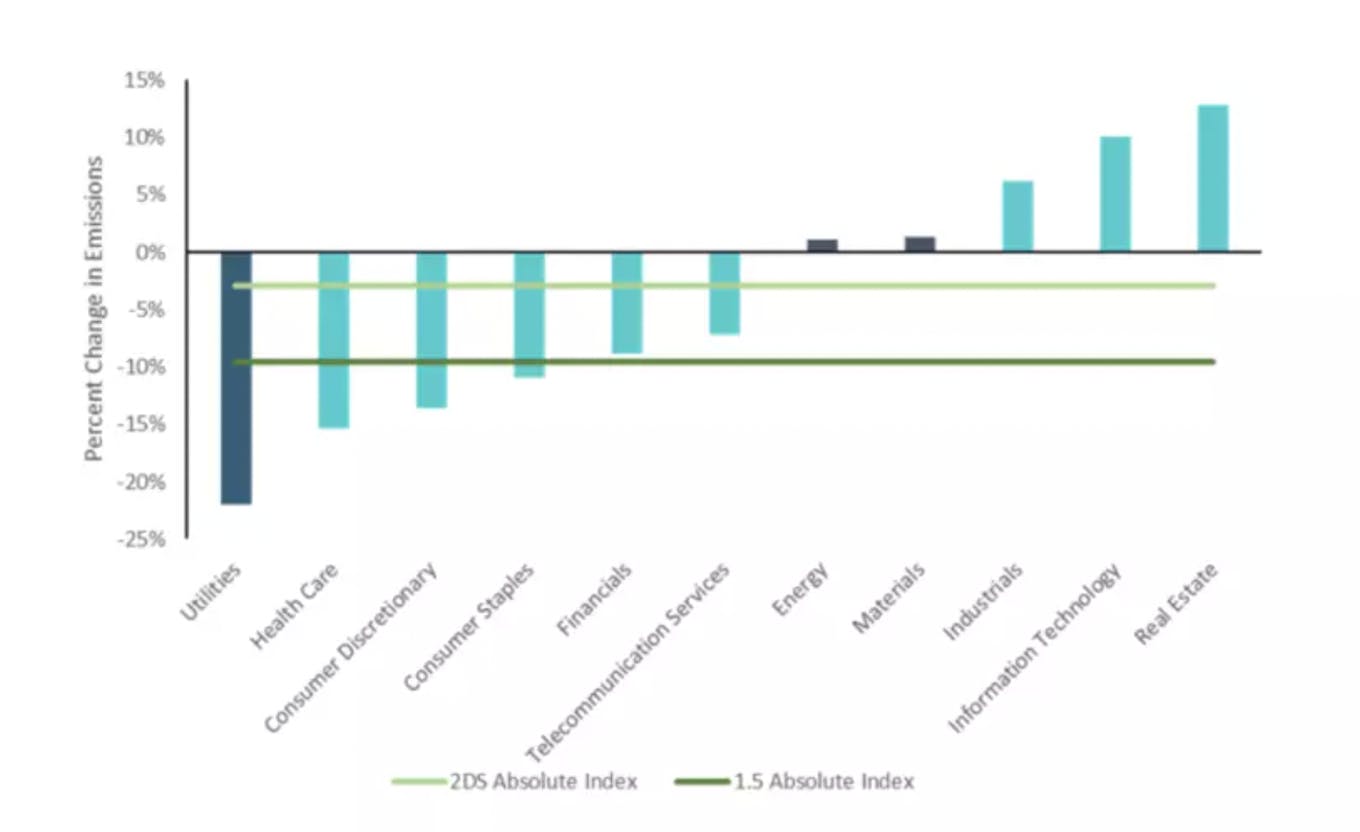 How the emissions profiles of different industry sectors are changing. Utilities are leading the way. The emissions of carbon intensive industries continue to rise. 2DS = 2 degrees global warming scenario.

Financial services have also reduced their emissions, while energy companies, materials firms, computing and real estate are continuing on a high-carbon path that is not aligned with the Paris Agreement on climate change, according to CDP’s data.