Can EVs be green if they run on fossil fuels?

How green is an electric vehicle that runs on fossil fuel-based electricity? Will the car run out of charge? Anxiety and misinformation are among the key barriers to greater EV adoption.

It’s said that an electric vehicle (EV) is only as green as its energy source. But working out the impact of EVs is not that simple, and misinformation is one obstacle deterring  their adoption globally, said experts at a recent event in Singapore.

Talking about her experience in trying to get a hybrid car for work, Dutch ambassador to Singapore, Margriet Vonno said she faced three problems: the cost of the car, cultural acceptance, and sourcing green electricity.

“I had a lot of friends in the Netherlands who told me Singapore doesn’t have green energy so you’re not changing anything,” she commented during a sustainability panel organised by German automaker BMW and Eco-Business last week. So she installed solar panels on her garage roof to create her own clean energy.

But Goh Chee Kiong, head of strategic development at Singapore energy utility SP Group noted that Vonno’s view reflected a misconception around the use of EVs in the city-state, where between 95 and 98 per cent of electricity is generated from natural gas. According to figures from the Energy Market Authority, solar power accounts for under 1 per cent of installed energy production capacity.

“Singapore has already adopted the cleanest form of fossil fuel-based power generation. When you convert from a normal internal combustion engine vehicle to an EV [that uses this electricity], effectively you’ve halved the carbon emissions,” said Goh, who was a panellist for the discussion on how innovation drives sustainability at the BMW World Corporate Forum.

“That’s important to state in case people are wondering: if we don’t have renewable energy in singapore, would converting to an EV be a positive contribution? The answer is yes,” he said, adding that emissions could be reduced further if Singapore increases the amount of renewables in its energy mix.

Fellow panellist Mikkel Larsen, chief sustainability officer of DBS Bank, agreed that there was a lot of confusion around EVs. “The story that driving an electric vehicle doesn’t help the environment is something we’ve all heard,” he pointed out, adding that the benefits of EVs have been poorly communicated.

“Take waste, for example: we’ve all heard that it doesn’t help to recycle in Singapore because it all goes to one place and then is burned in the incinerator,” Larsen commented on the widely held suspicion in Singapore.

Clarity on complex sustainability issues is key and there should be easy access to unbiased information, he said. “We have many sources of information, but we don’t really know which one to trust. Fake news has made things more difficult,” he said.

By 2040, there could be 530 million electrified vehicles on the roads around the world, with EVs making up 54 per cent of total global vehicle sales, reports Bloomberg New Energy Finance. This could save 8 million barrels of oil a day.

Governments have a role to play in enabling electric vehicle adoption by influencing pricing and infrastructure, panellists agreed.

Nils Michaelis, innovation lead, products operating group for Asia Pacific, Africa, Middle East & Turkey at professional services firm Accenture, pointed to hybrid car sales in Hong Kong as an example of when lawmakers could be the difference between whether technology takes off or flops.

“When the Hong Kong government said they were going to take away the import tax of EVs, overnight sales of Tesla cars shot up,” Michaelis shared. But when the tax was reintroduced, Tesla imports tanked.

Norway’s decision to curb non-electric vehicles on its roads by 2025 was another example of how government regulation can have a big impact. “Governments can change the picture very quickly, so how can we lobby for these regulations to happen?” he asked. 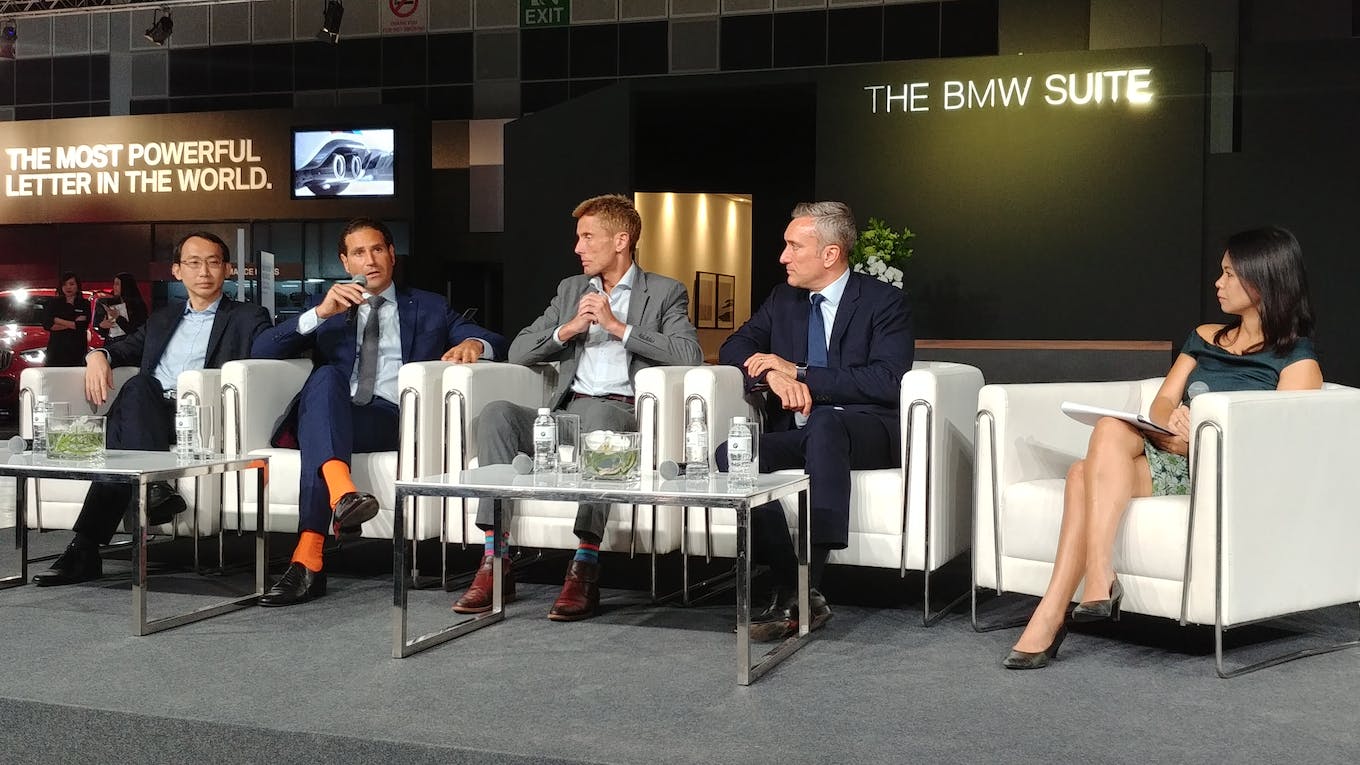 Singapore has been criticised by citizens and even Tesla boss Elon Musk for not supporting EV adoption, though it has backed electric car-sharing BlueSG in its launch last year.

Governments could also pave the way for EVs by mandating that new buildings have charging points for vehicles, suggested SP Group’s Goh. This would address range anxiety, or the fear of running out of charge in transit, and the lack of charging infrastructure, which have been other critical barriers to EV uptake.

To tackle this issue, SP Group this year announced it would build 500 charging points across Singapore by 2020 and last week launched a partnership with ride-hailing service Grab to gradually roll out a fleet of 200 EVs.

Beyond that, governments that have a roadmap for a transition to EVs could help make funding more accessible. “In countries where there is a strong indication of a transition to electric mobility and electrification, EV projects naturally become a lot safer for banks to lend to,” commented DBS’ Larsen.

The future of electric mobility

The growth in demand for electric cars has nonethless surprised BMW, which has to date sold 250,000 EVs globally, said Alexander Kotouc, head of product management BMW i for BMW Group.

“From a total sales volume perspective that may appear small, but if I asked you 10 years ago how many EVs we would be selling in 2018, many would have been sceptical,” he said.

According to Kotouc, the adoption of electric vehicles boiled down to three things: the benefits or ‘joy’ that the driver experiences; the infrastructure and policies backing this change; and finally, the consumer.

“We’re all customers. It’s up to us if we use plastic bottles or not, if we drive electric or use car-sharing services. We’re the ones who will really make the change,” he concluded.