From solar bottle lights to hybrid solar microgrids, Eco-Business explores the tech innovations from Southeast Asia that could bring about a clean energy future for the climate-vulnerable region.

Southeast Asia is a region that is developing rapidly at an unfortunate period in human history.

As the climate change clock ticks, the region of 641 million people must chart a developmental path that decouples the fossil fuel-dependent economic model of the past with a future that is expected to see global temperatures rise by, at the current rate of emissions, about 3 degrees Celsius.

The archipelagic bloc could be affected more than any other region on the planet from rising sea levels and extreme weather. But the clean energy transition is an opportunity for Southeast Asia to avoid the most severe impacts of climate change.

Eco-Business has identified seven green innovations in Southeast Asia that could help the region transition to a brighter, safer future. 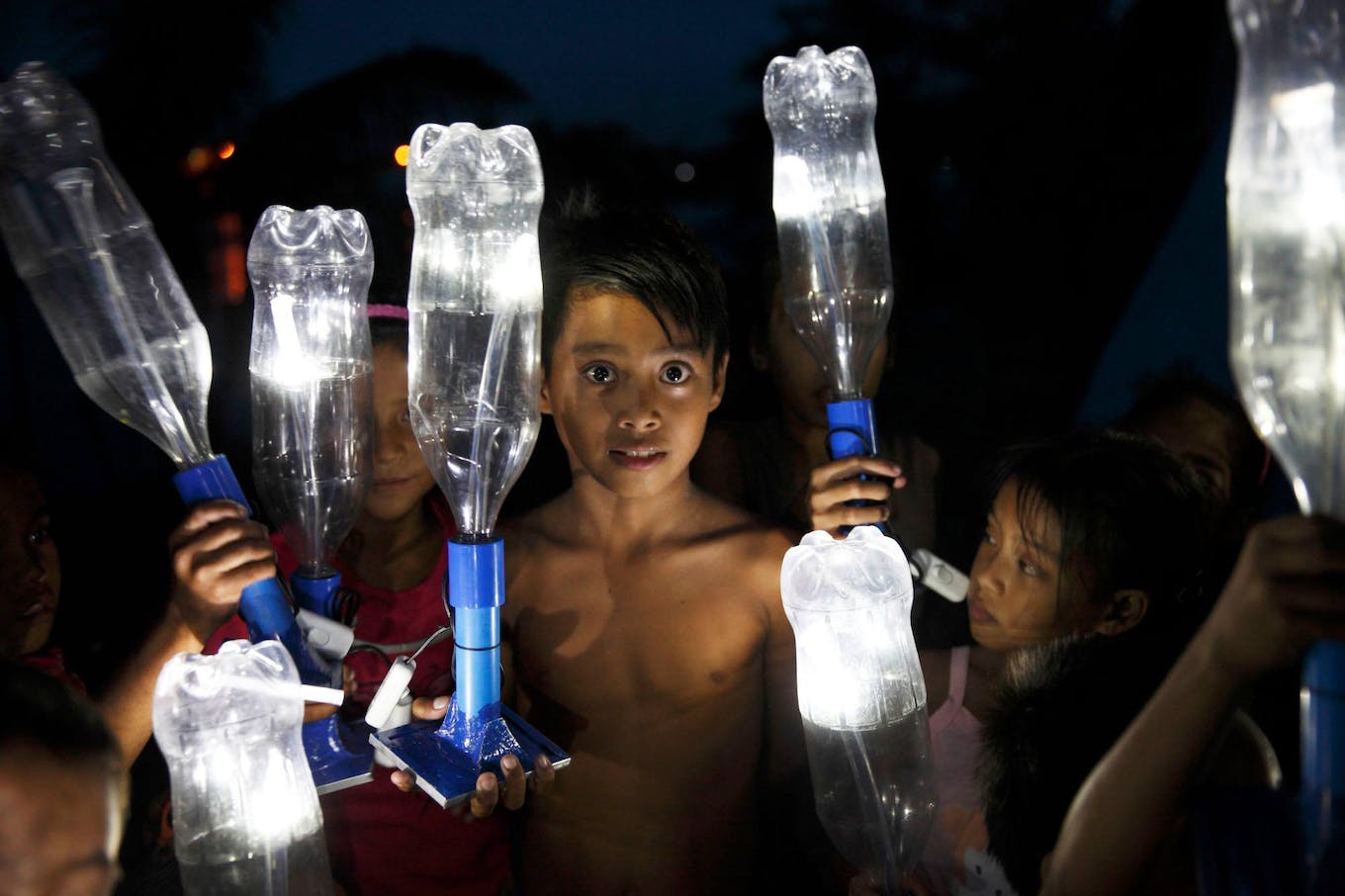 In the market for inexpensive, readily available and easily replicable lighting systems, there are few technologies more illuminating than Liter of Light’s solar bottles. Liter of Light (Tagalog: IIsang Litrong Liwanag) is a solar lighting project that was developed by Filipino non-profit MyShelter Foundation.

In the daytime, water-filled bottles illuminate indoor living spaces by refracting light. At night, the bottle runs on its solar battery. Easily mounted on roofs, solar bottles can light up a room much like a typical 40W light bulb—but without any electricity. They are also much safer than traditional light sources like kerosene lamps, which can cause fires and respiratory problems. 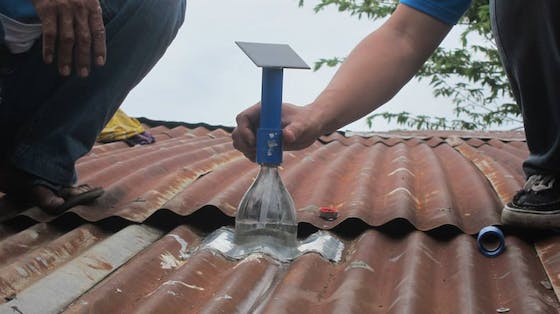 Close-up of a solar bottle light made by attaching a solar-powered lamp onto a discarded plastic bottle. Image: Liter of Light

How these solar bottles came about is an open source success story. Brazilian mechanic Alfredo Moser first invented the “Moser lamp” in 2002 when he put together an old plastic bottle, a sheet of galvanised steel, and some water and bleach to help his community deal with regular blackouts.

Other than making a few bucks from helping his neighbour install the lamps, Moser chose not to profit further from his invention. In 2011, social entrepreneur Illac Diaz caught wind of the invention. Chipping in with a bit of engineering know-how, he added a solar panel to the “Moser lamp”, so that the lamps are usable at night too.

Now, the non-profit engages volunteers to train locals to produce and install the bottles, benefitting some 145,200 households in the Philippines and another 208,400 in 14 other countries worldwide.

In Southeast Asia, where some 125 million people live off the energy grid and many more lack access to a reliable energy supply, these solar bottles have the potential to, quite literally, brighten up their lives. 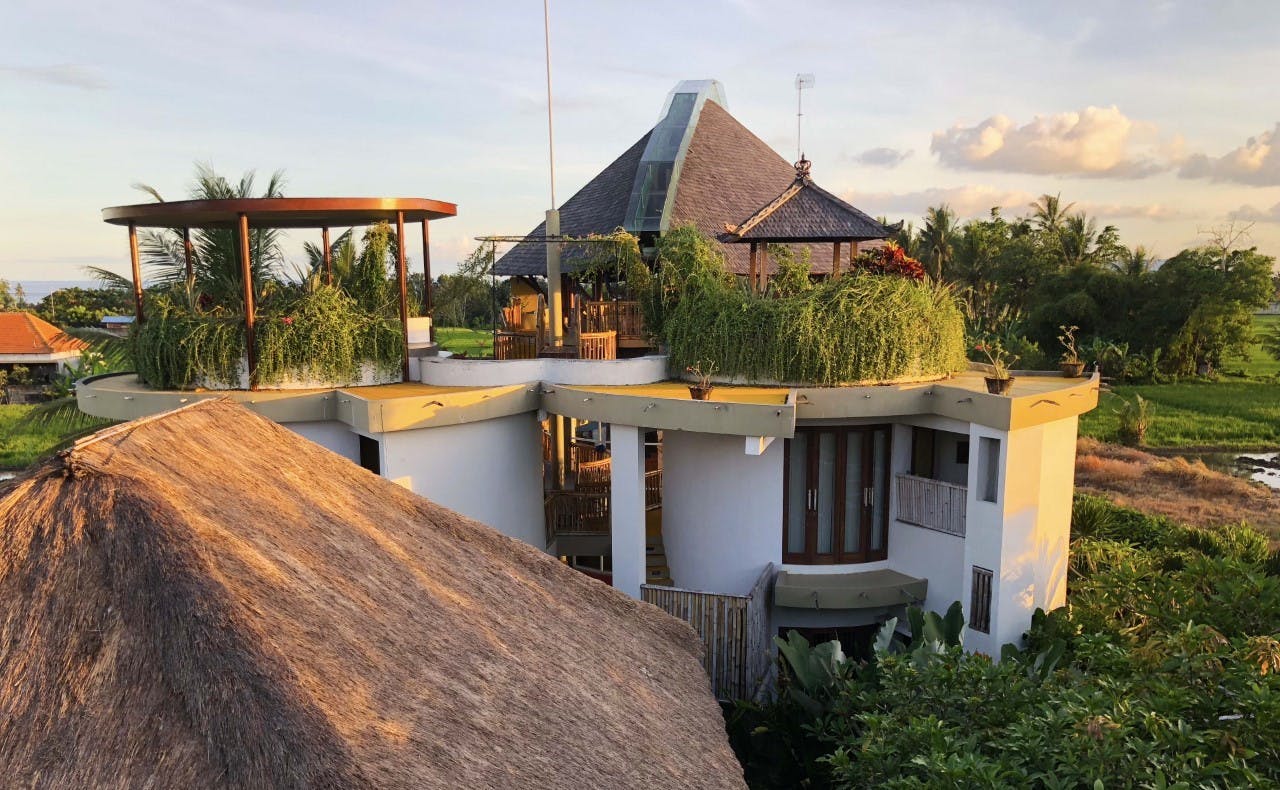 The Floating Leaf in Bali, Indonesia is one of Southeast Asia’s few holiday resorts where airconditioning is not blasted at sweating tourists. In fact, 80 per cent of the resort is not air-conditioned.

Instead, the eco resort tries to lower ambient temperatures through natural means by incorporating living green walls into buildings, and constructing rounded guestrooms to improve airflow and reduce the exterior surface area heated by the sun. 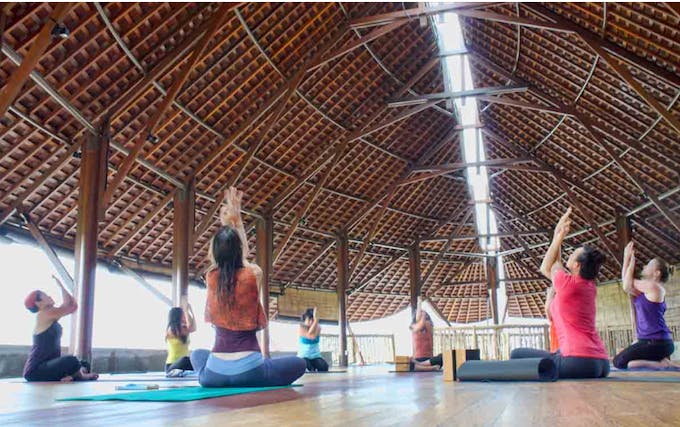 “The Yoga Sanctuary” in the resort, designed to passively cool by capturing natural breezes in the area. Image: The Floating Leaf

The site of the resort was carefully chosen after a five-year study of the area’s microclimate, and was positioned to capture the breeze as it passes through the area. The resort’s passive cooling highlight is its 185 square metre open-sided yoga hall. Horizontal flows of wind are drawn in from the sides and warm air escapes from openings in the roof.

While the hall is equipped with ceiling fans, resort owner Mikaku Doliveck tells Eco-Business that they are seldom needed. 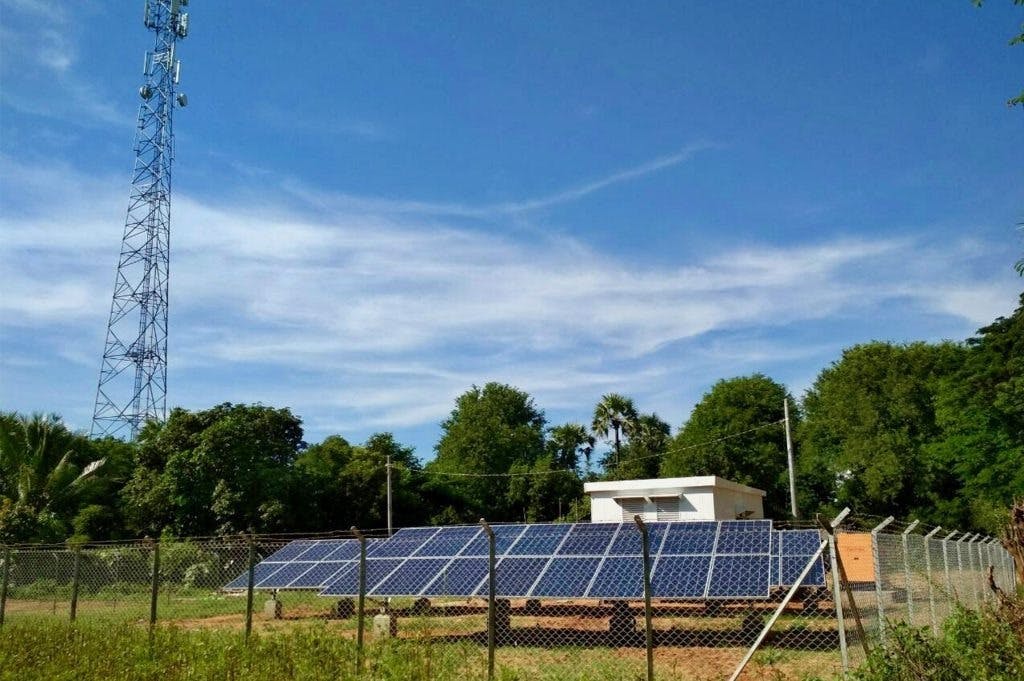 Myanmar, a country with one of the lowest electrification rates in Asia, has an ambitious plan to achieve universal energy access by 2030. But the challenge is, the majority of Burmese live in rural areas far from the main grid, and the low household energy consumption needs of rural living mean that it can be costly and impractical to extend the grid to these areas.

Microgrids are decentralised power plants that generate electricity locally, and Yoma’s source their power from solar batteries which are supplemented by back-up diesel generators that provide only 4 per cent of the total power required.

Each plant is expected to produce 22.5 tonnes less carbon emissions to produce the same amount of electricity as a diesel generator.

The plan is to build these microgrids near radio towers that have sprouted across the country in recent years, due growth in Myanmar’s telecommunications sector, and directly supply power from the microgrids to communities in the vicinity. That way, the communities can still obtain electricity without being connected to the national grid.

So far, the organisation has installed 51 such microgrids and plans to deliver another 200 by the end of the year. In the long-term, the microgrids could plug into the main grid.

As local communities rally against the development of new coal and hydropower projects emerging in the country of 53 million people, hybrid solar microgrids might be the most cost-effective and sustainable solution for Myanmar to achieve its rural electrification ambitions.

Eclimo’s e-scooters are being leased to the Penang Island City Council in Malaysia to assist its enforcement officers in patrolling duties. Image: Eclimo

In the haste for rapid development, many Southeast Asian cities are now choking from the pollution and noise of diesel-powered motorcycle engines, as more people migrate to already congested urban areas in search of work.

Each year, the region buys at least 12 million motorcycles and scooters and Malaysia-grown electric vehicle company, Eclimo, wants to penetrate the market with electric scooters that clear the air in Southeast Asia’s sprawling metropolises.

Eclimo, short for Eco Life Mobility, recognises that the price of its e-scooters are steep for its audience—the estimated retail cost for one e-scooter is about RM18,000 (US$4,300)—hence, the firm has introduced a leasing model in Penang where commuters can rent an e-scooter much more affordably, at RM50 a day. 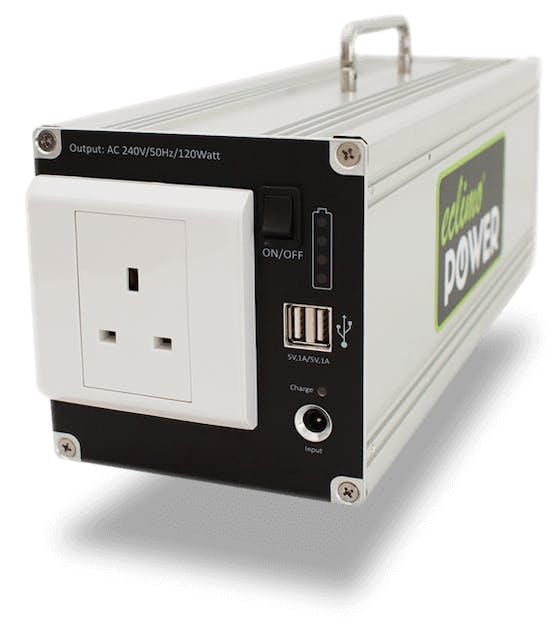 Charging the e-scooters does not require special charging equipment. Eclimo’s plug-and-play battery pack, which also has add-on solar charging capabilities, can be charged in four hours via any AC power outlet.

The company is looking to expand its presence in Malaysia by leasing its e-scooters to key players from different industries, and already counts fast-food chain KFC, Leisure Farm Resort, the Royal Malaysian Police, various city councils and residential building operators among its customers.

Eclimo has also collaborated with United Nations Educational, Scientific and Cultural Organisation (Unesco) to lease its e-scooters to reumork (tricycle) drivers in Cambodia in response to emissions-driven acid rain in the Angkor Wat area. 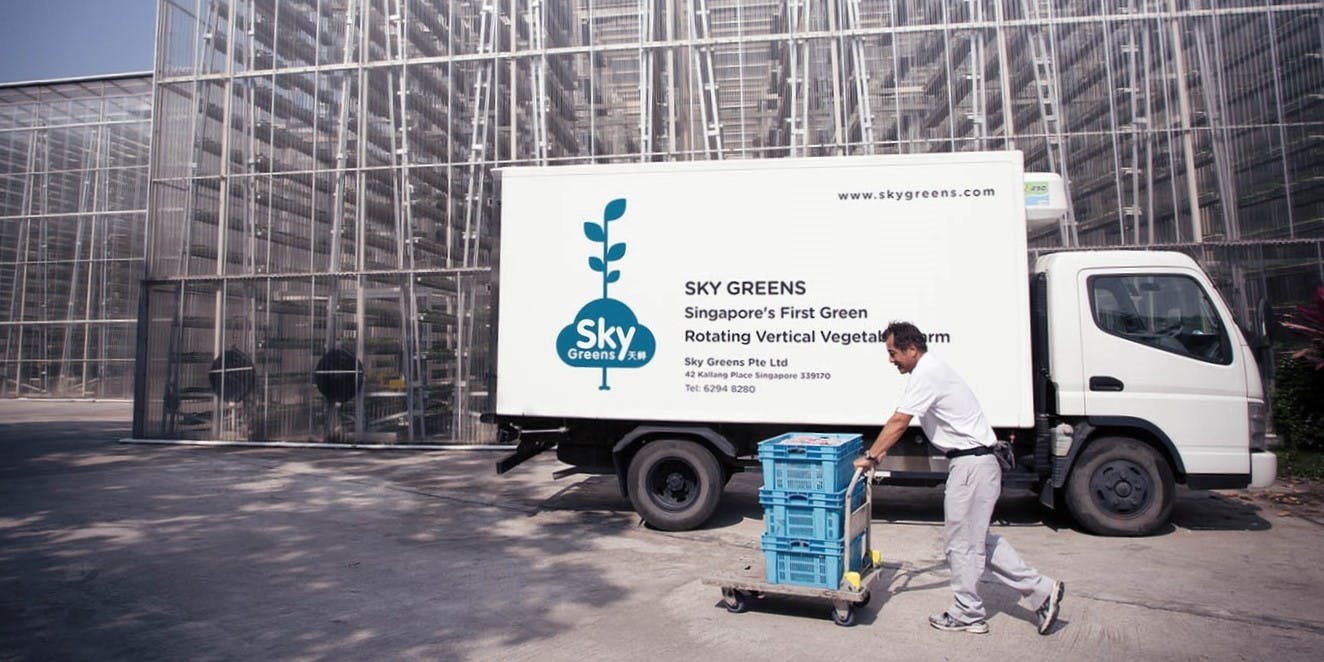 Sky Greens’ vertical farming systems in the background. Each vertical tower requires only 40 watts of electricity to operate—the equivalent of one lightbulb. Image: Sky Greens

In search of a more energy efficient way to feed the world, farmers are in search of agrotechnological solutions to rethink farming practices.

Like a scene from a utopian fantasy, endless rows of vegetable towers are closely packed together in the outdoor vertical farm. On each vegetable tower sits 38 tiers of leafy greens submerged in nutrient-rich solution. To ensure that each plant gets enough sunlight to grow, the tower rotates slowly throughout the day via a hydraulic water-driven system that only requires half a litre of water and 40 watts of electricity to operate—the equivalent of a single lightbulb.

Greens produced by the vertical farm are also free from chemical fertilisers and pesticides.

Currently, Sky Greens are selling their vegetables at local supermarkets. The company has launched pilot projects in Bangkok and numerous cities in China, with plans to introduce this technology to other cities around the world. 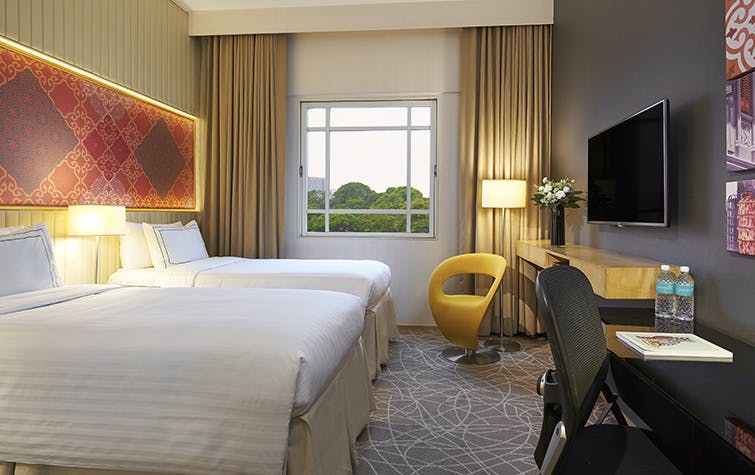 Hotels in the tropics are often pressured to blast air-conditioning to keep guests satisfied, usually at a heavy financial and environmental cost. As temperatures in the region continue to climb, energy optimisation is more important than ever.

Charting the path to a cleaner hotel industry is Singapore-based energy management start-up SensorFlow, which has developed a big data solution that can deliver up to 30 per cent in energy savings. Its technology uses ultra-sensitive wireless sensors to monitor environmental changes in hotel rooms to boost energy efficiency. 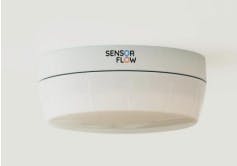 How does it work? SensorFlow tracks room occupancy and automatically turns off the air-conditioning when the hotel room is unoccupied, saving around 8,300 kWh per month. The customisable system can also be toggled to raise temperatures when guests are away and switch back to their preferred level upon their return. This reduces energy consumption without compromising guest comfort.

Given that the average hotel guest prefers room temperatures between 22 and 23°C, hotels can set a minimum setpoint of 21°C using SensorFlow’s technology. Its proprietary sensors can also detect humidity in rooms, allowing hotels to actively avoid mold outbreaks.

Early this year, the cleantech firm successfully raised US$2.7 million in series A funding, which will be used to expand operations for its current clientele in Singapore and drive entry into new markets in the region.

Few people would think to establish an urban farm on top of a hotel, much less one that harvests edible microalgae.

But 10 years ago, engineer Saumil Shah aspired to do just that when he founded EnerGaia, a Thai cleantech startup with a vision for the future of food production. The product is a blue-green algae with high nutritional value known as spirulina. While still relatively obscure, Shah believes that this superfood could rival other meat-alternatives in the future. 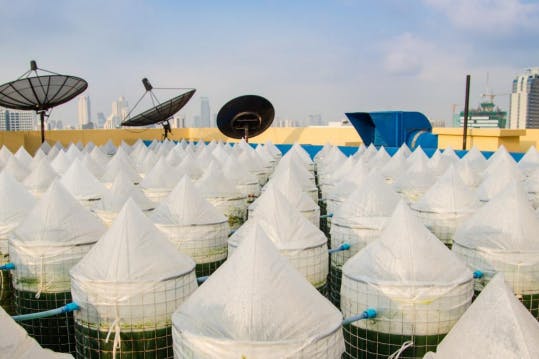 The company’s technology prides itself on being carbon-light and resource efficient. On the energy front, EnerGaia leaves nothing to waste, using carbon dioxide emissions from industrial sites to power aeration and mixing for algae growth. Moreover, its proprietary bioreactor only requires 150 litres of water to produce one kilogram of food.

The company manages to avoid buying land by setting up farms on previously unused rooftops. These unlikely locations are ideal as high temperatures and direct sunlight facilitate the photosynthetic process, which is essential for spirulina growth.

Since its inception in 2009, the company has expanded operations to Indonesia, India, Bangladesh and Vietnam. It is also in the midst of promoting spirulina production in rural areas in collaboration with the Bill & Melinda Gates Foundation.